It’s almost the end of January; the holidays are a distant memory (I feel like I could use another one already!), it’s freezing out, and the last thing I want to do after a long day is cook. So I was thrilled to see an advertisement for “Snowdelicious” at Le Chien Noir. “Snowdelicious” is a winter special featuring $11 lunches and a $27 three-course dinner on Mondays, Tuesdays and Wednesdays during the winter season. In addition to Le Chien Noir, Snowdelicious is also offered at its sister restaurant, Atomica ($11 lunch/$22 three-course dinners).

I’ve dined at Le Chien Noir a few times since I’ve been in Kingston and I’ve always been more than satisfied with my meal. I think that the menu shows great depth and breadth—containing classic dishes you expect to see at a fine-dining establishment (e.g. steak frites, chicken supreme) , but also, for the more adventurous epicureans, modern and unique food specials (e.g. marrow bones, lobster spaghetti and meatballs) creatively crafted and executed by head-chef Derek MacGregor. Le Chien Noir has an impressive wine and beverage list, including 20 wines by the glass and 10 beers on tap. While the regular prices are indicative of Le Chien Noir’s attention to detail, they are prices that I’m willing to pay for quality food made with fresh ingredients. 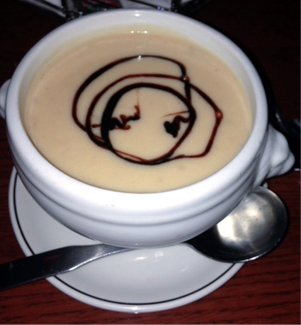 One of the things I like most about Le Chien Noir is the ambiance. It’s lively but classy and sophisticated with its high tin ceiling, walls of exposed brick, mirrors and 20th century French prints. The voyeuristic part of me enjoys that the kitchen is partially visible from the dining room. They also boast a beautiful limestone patio, which is heated and can be enjoyed 3/4 seasons.

Upon arriving for my “Snowdelicious” dinner on a Tuesday night, I was impressed to see that the special menu offered choice for each of the three courses. For an appetiser, one has the choice between the daily soup, a house salad featuring roasted “grey ghost” squash and goat feta, and a winter salad with Celtic blue cheese, candied pecans and crisp pig ears. For dinner, diners must face an agonizing choice between coq au vin, root vegetable and mushroom pot pie, PEI mussels and frites or steak frites. More on the dessert later.

For my app, I paired a glass of Ontario Riesling with the daily soup: potato and caramelized onion topped with a maple balsamic drizzle. The ingredients in the soup had been emulsified, giving it the consistency of a thick milkshake. There were sweet notes but I did not find them to be overwhelming. This was the perfect soup for a cold, blistery night, as it definitely had a wintery quality and hardiness to it. However, it was quite filling and would have been better as a standalone meal. I would definitely order this soup again, but instead pair it with a salad, rather than two more courses.

As a main, I opted for the steak frites, a 8 oz ‘AAA’ flat iron steak with frites, local mushrooms and truffle butter. Being meat and potatoes, steak frites seems pretty simple to execute, but that’s not always the case, especially with flat iron, which is not the most expensive cut of beef. However, when cooked correctly, it can be as enjoyable as a New York strip loin. And this one was. My steak was cooked to perfect “medium,” with a charred outside that broke away to a juicy, tender centre, and topped with a fabulous truffle butter. The frites were delicious — fresh cut and hot, without being oily.

They were simply seasoned with sea salt and paired with a garlic aioli. This was a huge dish and I took half of it to go.

Then came the toughest decision of the night: what to have for dessert. After toying over 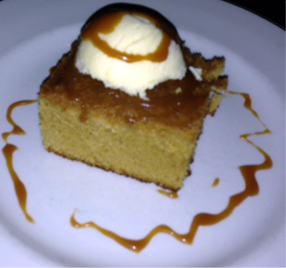 the Madagascar vanilla crème brûlée and the chocolate hazelnut napoleon, I finally settled on the “popcorn blondie” and I was not disappointed. The blonde brownie was paired with salted butter caramel and an absolutely delectable house brown butter popcorn ice cream. While this was not an overly sweet dessert, the salty, buttery, and vanilla flavours complimented each other perfectly.

In sum, I was very happy with my entire “Snowdelicious” experience at Le Chien Noir, both in terms of food and service. If I had any criticism at all, and this is really picky, I would say that I was disappointed that the fresh baguette that accompanied the meal was served with packets of butter rather than a whipped or flavoured butter made by the kitchen. Again, this is very picky, but something I really enjoy at similar fine-dining establishments.

If I were you, I wouldn’t miss the opportunity to cash in on “Snowdelicious” because before we know it the snow will be gone and so will this amazing deal!