It’s not often that a new restaurant opens in Kingston without my noticing. Always eager to try somewhere new, I’m usually searching for menus online before the renovations are done and signs go up. That is why I was flabbergasted that a popular West end BBQ restaurant, LA Bob’s Southwestern Smokehouse, had been open for over a year before it was brought to my attention by a Queen’s faculty member (thank you!) who suggested I review it. 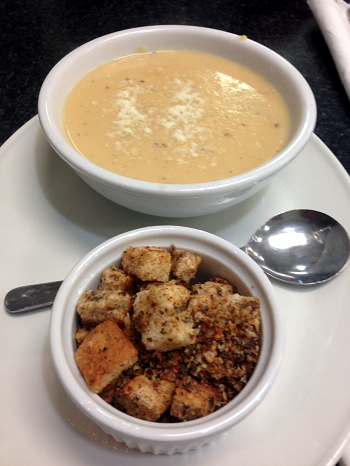 Actually, LA Bob’s has been drumming up customers since 2011 when it existed as a carry-out and catering outlet before moving to its current location at 1759 Bath Road in 2013. Its namesake, Bob, is a chef who moved at age 20 to California to pursue training. As a sous chef, he honed his skills by cooking for some of Hollywood’s elite, including Oprah, Kanye West, Sally Field, Joaquin Phoenix, and Jack Nicholson, before relocating to Kingston to start his own restaurant and catering business.

LA Bob’s is by no means “fancy” inside, but the high-quality, freshly-made dishes are definitely fit for the stars. While the focus is on a variety of drool-worthy, house-smoked meats, including ribs, beer can chicken as well at traditional smoked meat, the menu contains a number “lighter” options such as soups, salads, and sandwiches all made-to-order. Diners can sit in or take away. There are also a few bake-at-home options you can purchase.

We dined in on a Friday night. The place was packed (we got the only available table for two) and the take-out business was steady. I had a hard time narrowing down my meal choice because everything looked so appetizing, so Curtis and I decided to try a few items and share. Their feature drink specials were $4 for a 6-ounce of Niagara wine (Peller Estates) and $3 domestic beers. I thought wine would pair just perfectly with BBQ, so I indulged in a giant glass. 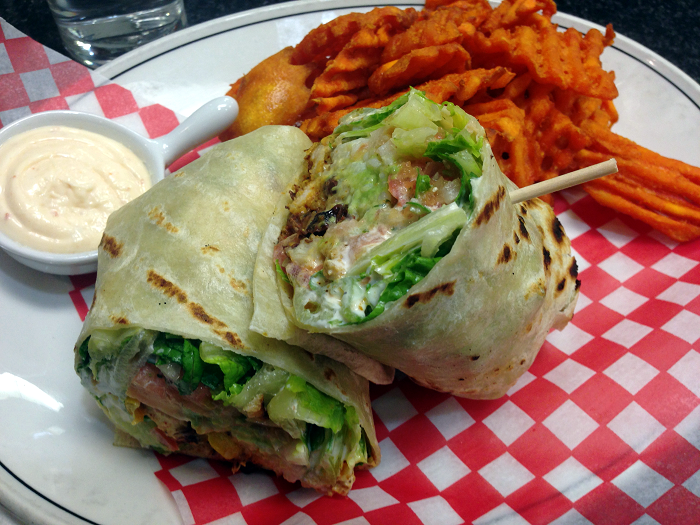 First up was the beer and cheddar soup made with medium cheddar and Rickards Red with homemade croutons for $4.99. Creamy and rich, the soup was mellow and paired well with the savoury bread pieces. The soup was a bit indulgent to have regularly, but would be a nice treat if you are having a lighter meal (even though we were not!).

One of our mains was the chicken burrito (beef and vegetarian are also available) with shredded marinated chicken, cilantro-infused rice, black beans, avocado, sweet corn, chipotle ranch dressing, topped with homemade pico de gallo, and rolled in a twelve inch tortilla for $8.99. A meal in itself, the burrito was stuffed to the max and absolutely scrumptious. We both agreed that it was probably the best burrito we’d ever had. I would definitely go back just for one of these.

Alongside the burrito, we shared sweet potato lattice fries with chipotle mayo. The fries, at $4.99, were a bit pricey for the amount you got, but they were good and something about fries being in this shape makes them more fun to eat. 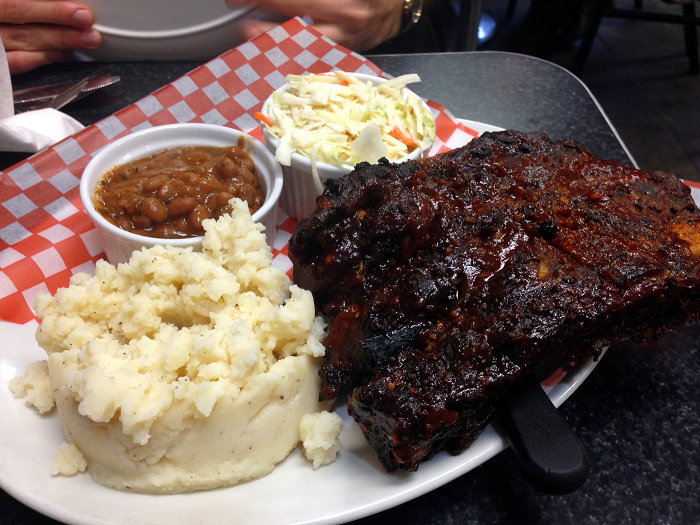 Our second main (yes, we were a bit indulgent that night) was the daily special of three beef ribs with garlic mashed potatoes and baked beans, or French fries for $18.99. We knew we couldn’t review a BBQ place without trying the ribs, and we were not disappointed. The ribs were huge and flavourful with the right amount smoke and saturated with a delicious homemade BBQ sauce. While the mashed potatoes arrived lukewarm, they still were pretty satisfying; I could taste the fresh garlic blended in. A pleasant surprise was the baked beans, which were clearly homemade and spiced with fresh herbs. This was a very heavy, but satisfying dish! I would recommend changing into stretch pants before consuming!

In addition to BBQ and burritos, LA Bob’s offers a number of desserts for those who can make it past the mains, from deep-fried cheesecake to homemade carrot cake. The indulgence never ends at this place!

We will definitely be back for a sequel. Whether you’re looking for an everyday delight at a fairly reasonable price or want to dine like the stars, you need to try this place. From the delectable smoked meats or a best-you’ve-had burrito, L.A. Bob’s rolls out the red carpet to your taste buds.