If you were to ask a longtime Kingstonian or former resident for a casual restaurant recommendation, chances are The Kingston Brewing Company (KBC) would be at the top of their list. Founded in 1986, the Brew Pub as it’s affectionately known, is renowned for their shortlist of housemade-beer, the private patio, and the vintage ‘Dragon Wagon’ which is permanently perched outside until the snow flies. The Brew Pub’s endurance over the past 30 years is thanks to loyal patronage and word of mouth, however that’s not to suggest that everyone was a huge fan of Kingston’s original brew pub. And as unpopular as it may be to admit, up until quite recently, I often found myself at odds with their lengthy beer-infused menu, lackluster beer offerings, and the dining space’s dated decor.

Last Fall we learned of KBC’s sale to a group of employees, which coincided with the unveiling of a new menu prominently featuring housemade BBQ, 26 different beers on tap including well over a dozen guest breweries, a renovated patio, growlers to go and the list goes on.  Suffice it to say, change was the order of the day, and for the KBC faithful, these enhancements were met with a few raised eyebrows.  Gone were certain favorite menu items, while the expanded availability of beer from other breweries bristled against KBC tradition.  But as they say, some traditions are meant to be broken, and sometimes change is good.

Although we were eager to charge in and review the “new” KBC, I also wanted to give them time to test out and really refine things so that I could give them an honest second look; note I had been to KBC on dozens of occasions before the sale/changes.  And so, this Summer we ventured back to The Kingston Brewing Company where we were pleasantly surprised, again and again, by fresh new ideas in a familiar setting.
—–

For starters, I can’t tell that much has changed inside, and so if you weren’t a fan of that kitschy pub decor, you will probably want to head out to the renovated patio.  With new lighting, seating and a guest appearance from a bunny rabbit, what’s not to love on this private patio?

The old Brew Pub had a notoriously large menu, which made ordering difficult for first time diners, as well as those who suffer from decision paralysis.  Thankfully, the new menu is much easier to digest as it’s been reduced to a single page of starters, salads, sandwiches, pub favourites and BBQ, with KBC beers, rotating taps (e.g. Stone City, Skeleton Park), wine, spirits and ciders listed on a separate page.  You will probably still have trouble picking what to order, but that’s because they’ve done such a good job pairing it down.  Gone are many fan faves, but rest assured popular crowd pleasers such as the Brewer’s Plate and High Roller Special can still be found – certain traditions aren’t to messed with. 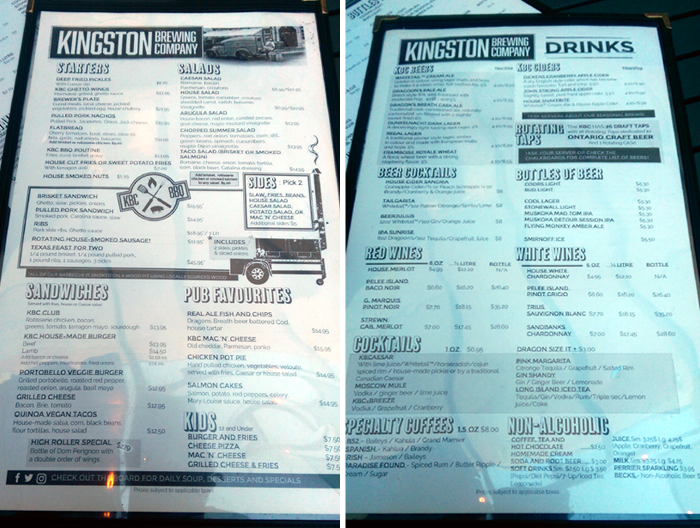 While KBC might be renowned for their beer, they’re quickly earning an impressive reputation for their BBQ offerings, all of which is smoked on a wood pit using locally sourced wood.  From brisket to pulled pork, and ribs to a rotating variety of housemade sausage, suffice it to say you’d better come with your appetite.

On my first visit, I took the dive and ordered the pulled pork sandwich ($14.95), which is served with Carolina sauce, slaw, pickles, onions and your choice of two sides; slaw, fries, beans, Caesar salad, potato salad or Mac ‘n’ Cheese.  My first cautious bite was dripping with smokey flavor and a sauce that perfectly balanced heat and sweet.  I was instantly relieved, and hooked.  Of course, not all slaws are created equal, and KBC’s is no exception!  It is remarkable, and this is coming from a guy who absolutely hates slaw.  All in all, huge flavour and portion for the price. 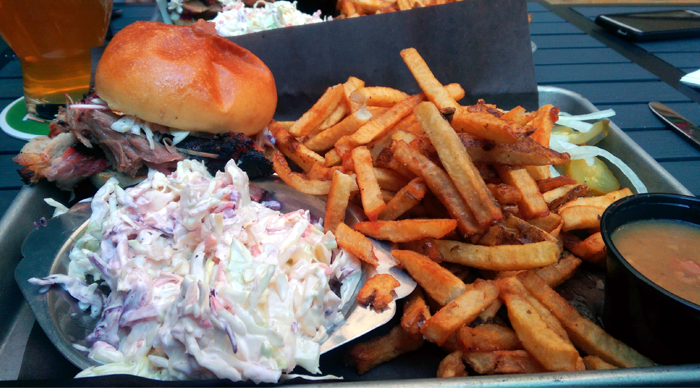 On my second trip back to KBC, I wanted to try something different in order to ensure my first visit wasn’t a fluke.  Sticking with the BBQ offerings, I reached for the brisket sandwich ($15.95), which is served with Ghetto slaw, pickles, onions, and again, your choice of two sides.  As soon as the plate arrived, I knew that I was in for a treat.  The fork-tender meat was tidily topped with everything I could have hoped for, and nestled between two springy buns.  Each bite offered a combination of spice, sweet and crunch, which was oh-so satisfying.  My only beef was that there wasn’t more, however as you can see from the photo, the amount of fries you get is enough to fill the hollowest of legs.  Pro tip: do yourself a flavour and order a side of their homemade gravy, which has actual chunks of brisket in it.  Wow! 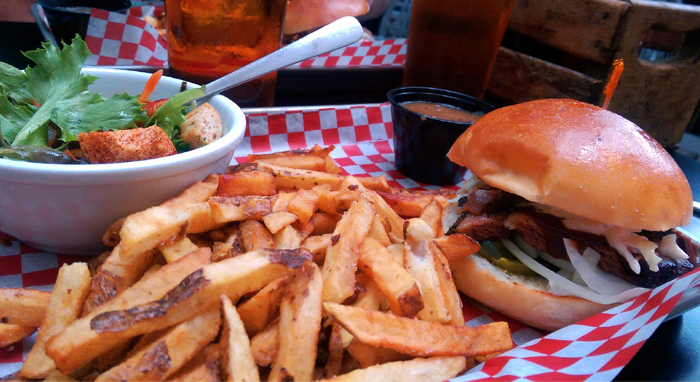 On subsequent visits I’ve sampled the KBC Club, Ghetto Wings and a few other offerings, each of which tends to remind me of KBC’s old menu.  Again, that may or may not be a good thing depending on your stance with respect to what the Brew Pub used to serve.  Regardless, I think that the new owners have done a solid job incorporating fresh ideas without going overboard with change.  New offerings such as the pulled pork, chunky brisket gravy and guest taps will certainly keep me coming back.  And, if I’m ever in a pinch on a holiday, I would even consider taking advantage of their growlers of KBC brews to go.  Bottom line: if you’ve been avoiding the Brew Pub for a while, you need to give them a second look to see what all the fuss is about.