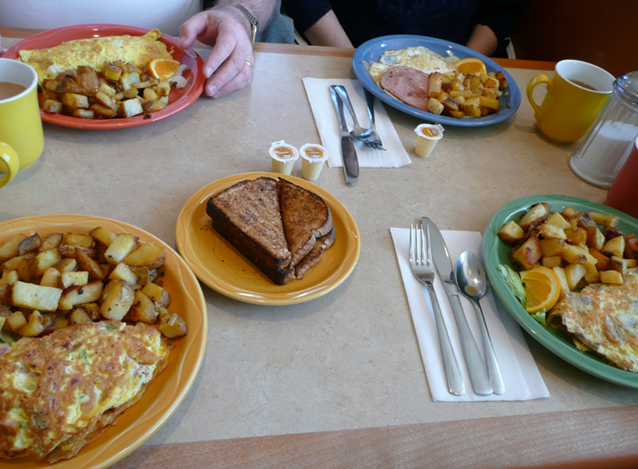 Sunday brunch with the ‘rents is a time honored tradition that has existed ever since my first year of undergrad, but in recent year’s it has fallen by the wayside due to competing schedules. Now we’re lucky if we get to engage in Sunday brunch with my folks once a month. How I miss the mid-morning grease, excessive consumption of coffee, overdue conversations, and the rare discovery of a new location that hits the spot. When we started to “review” restaurants in the name of Kingstonist, D and I decided that we had to venture outside of our normal grazing stations, or else things would get pretty boring. This led to numerous culinary adventures to Olivea, Asha, and Serves You Right just to name a few.  This past Sunday we expanded the list by another, and gave Jiffy Grill a shot.

Long time residents of Kingston may remember the old Jiffy Grill, which was located on the southwest corner of the Kingston Centre.  Save for Morrison’s, I think that it’s safe to say that the Jiffy Grill is first runner up to the title of Kingston’s finest breakfast institutions.   This is owing to the fact that the Jiffy Grill has managed to survive for so long, and endure the stress associated with going on a prolonged hiatus during the demolition, relocation and reconstruction process.

The Jiffy Grill now resides on the southeast corner of the old Kingston Centre site, and is bordered by big boxes inhabited by the likes of CIBC, Wild Wing, and Jumbo Video.  The inside has obviously been upgraded since the olden days, but it has still managed to maintain the look and feel of a traditional dinner.  As soon as we entered, we realized just how popular this place is, as it was jam packed with regulars, and casual brunch aficionados.

Orders were placed, and delivered within 5 minutes, which is definitely in keeping with this restaurant’s namesake.  As pictured above and on our Flickr, the fare is simple, and what you’d probably expect at a greasy spoon. That said, our food was definitely not drenched in oil.  Although I’m skipping over a complete review of their menu, it’s important to note that breakfast is served all day long, while non-breakfast items included everything from pizza to sandwiches.  All in all, it was definetely a tasty meal that was extremely affordable.  We’ll certainly be heading back there in the near future, and if you’ve never had the pleasure, I’d highly recommend that you give the Jiffy Grill a try.