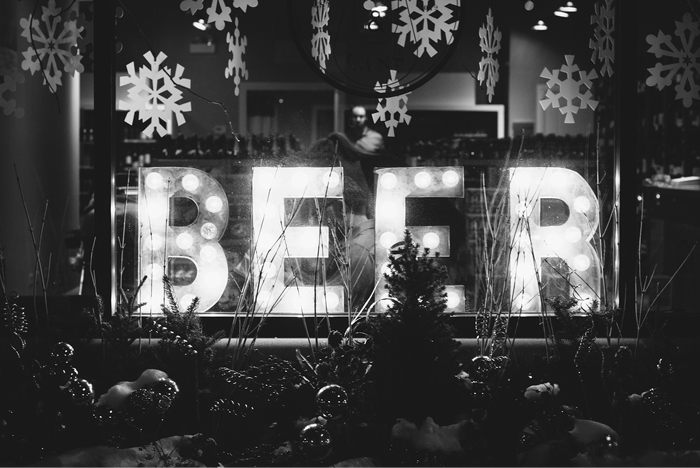 Christmastime usually sees gifts of wine and champagne, sometimes a nice bottle of liquor, but with the wave of quality craft beer Kingston and surrounding areas offer, there is no reason you can’t bring a bottle (or two) of local brews to a holiday gathering. Heck, if there are beer lovers on your gift list, our local breweries have something special for you to put under the tree. Craft beer can be just as complex as wine, and we’ve talked to our favourite breweries about their special releases for the holiday season.

Aside from their core line-up, King’s Town is adding a Gametime EPA (English Pale Ale, 5.2% ABV) to their bottle shop, as well as currently unnamed coconut stout that is sure to add a mildly tropical feel to the traditional notes of coffee and chocolate. Both beers are available in growlers and in 750 ml swing top bottles. They also still have stock of the Herchmer Haunted Ale, a rauchbier (smoked beer, 5.3% ABV) in their bottle shop as well. King’s Town is also offering gift baskets this holiday season, with a choice of pre-made or make-it-yourself not only featuring their beers, but a variety of swag, mustard, sauces, and even dog treats! If you stop in to shop, you might well stay for a sip as they now offer 12 oz. pours. Take a break for a beer in their new booths repurposed from church pews. King’s Town will be celebrating their first anniversary on December 23rd, so be sure to keep an eye out for a celebration!

Headed out of town on the 401? Riverhead Brewing is conveniently located just off Gardiners Road and while you should certainly pick up a few cans of their exquisite London Porter for yourself, treat the hop fanatic in your life to their Double IPA (7.1% ABV). This winter release makes its debut on December 9th, and the folks at Riverhead have described it as having “a biscuit malt presence and a balanced hop profile. Massively dry-hopped with Amarillo and Cascade, showcasing hop characteristics of melon and grapefruit.” It will be available in 473 ml cans, as well as on draft at the tied house. Riverhead is a great place to take visiting family members as well, with a warm atmosphere and a delicious menu of paninis and, our favourite here at Kingstonist, hot pretzels!

Stone City Ales always brings their A game. Whether it’s their lusciously inventive menu (ricotta dumplings with smoked shitake mushrooms, anyone?) and some of the most experimental taps in town, you’d expect no less than at least eight beers making their appearance between now and Christmas. A few are regular seasonal releases sprinkled with a handful of provocative newcomers. Craft beer fans can expect to see the following favourites return: Clementines Rule Everything Around Me (sour wheat with clementines, 5.5% ABV), Tannenbomb (Imperial Witbier brewed with orange peel, cranberries, and spruce, 8.2% ABV), the mighty Juggernaut (Bourbon Barrel-Aged Imperial Stout, 9.5% ABV), Freyja (New School Pilsner, 5.2% ABV), and the perfect New Year’s Eve beer, Stay Gold (Belgian Golden Ale, 9% ABV). Be sure to get your hands on the two new kids on the block, Fitzroy (brown ale) and Fumette (Grisette). Their farmhouse ale, Lady Jane (6.1% ABV) is also making a reappearance before the start of December so be sure to keep an eye on their social media for her arrival. Stone City Ales also has an array of fun swag for stocking stuffers too!

Take a quick trip to the farm this December to purchase a growler or two of MacKinnon Brothers’ annual winter release, Wild Peppermint Stout (4.8% ABV). This traditional dry Irish stout is brewed with the wild peppermint found in the area. Think of it as almost like a grown-up subtle version of the York peppermint pattie, but in liquid form. December also sees this year’s Harvest Ale, (5% ABV), a unique farmhouse/saison ale made with everything entirely on the Mackinnon farm. You can find both of these beers on tap around town, but if you want your own to take home or gift to a friend, head west to Bath, friends!

Yes, the Napanee Beer Company is not in Kingston, but hear us out: this brewery, just a little over eighteen months old, won New Brewery of the Year at this year’s Ontario Beer Awards. They regularly can be found on taps around Kingston, and you’re always likely to see head brewer Geordan Saunders pouring you a taste at any of our local beer festivals. This holiday season sees him releasing a compelling new beer that is a must-have for the beer lover in your life (or yourself!). Dweller on the Threshold (8-9% ABV) is a Spanish red wine barrel-aged Belgian Dubbel; it’s styled as being “dry and spice-forward with notes of fig and raisin, a subtle sweetness, and a hint of full-bodied red wine.” This beer is part of Napanee’s Redacted series, which are very limited edition releases—usually only a few hundred bottles—and once it’s gone, it’s likely to not return. Take our advice and pick up two: one for sipping and one to age.