Kingstonian’s taste buds and arteries have been on stand by since we announced that four new burger, fry and poutine purveyors would be opening up this Fall.  While Smoke’s Poutinerie was the first horse out of the gate, we had to wait until mid-October for Harper’s Burger Bar to open their doors and drop their deep fryers. Based on past experiences where we’ve jumped at the opportunity to review new restaurants, only to be disappointed as a result of opening week jitters, we decided to give Harper’s a bit of time to work out the kinks. Needless to say the wait was unbearable, as we had to endure countless mouth watering recommendations from friends.  In the end, good things come to those who wait. 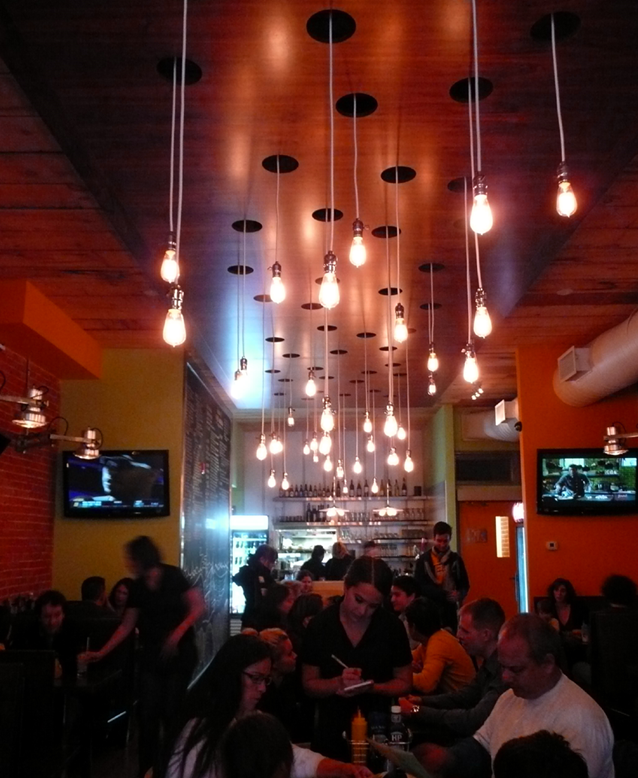 Harper’s is owned by the same group that’s behind the often praised le Chien Noir and Atomica Pizza and Wine Bar.  Patrons of both of those establishments have come to expect fine dining in a posh setting with a price tag to match.  Harper’s is no exception, and as soon as you step foot inside, it’s clear that a lot of time and effort went into designing the perfect gourmet burger bar experience.  From the interesting light fixtures to the wall-sized menu board, unique condiments on the tables, and a drink menu that includes everything from beer floats to spiked shakes, it will take you a few trips to appreciate every little detail they’ve packed inside.  That said, I’m not convinced four flat screen televisions were essential to pulling it off, but they’re easy enough to ignore. 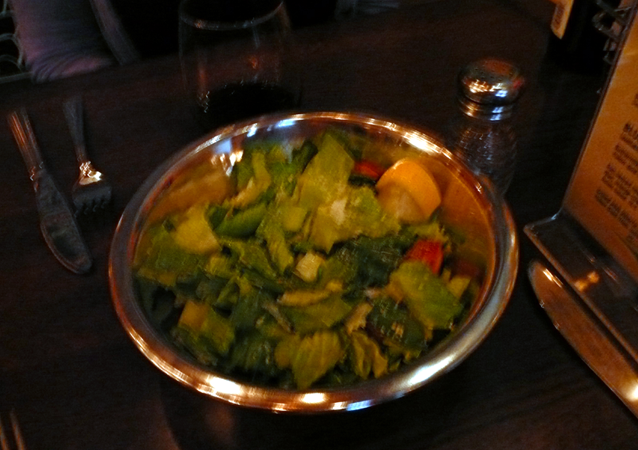 We expected a bit of a wait at the door during the dinner hour last Friday, but we were seated in less than 10 minutes. Table service was very prompt, as our drink order was taken and delivered in no time at all. From there we proceeded to make our main course selections, while I also decided to try out their caesar salad as a starter. The bowl of Romaine hearts, house caeser dressing, sourdough croutons, and parmesan was a pretty decent size for the price ($7.50), however I found it to be very light on the dressing. That’s probably a good thing though, because we visited Harper’s to indulge in burgers, not creamy salad dressing. 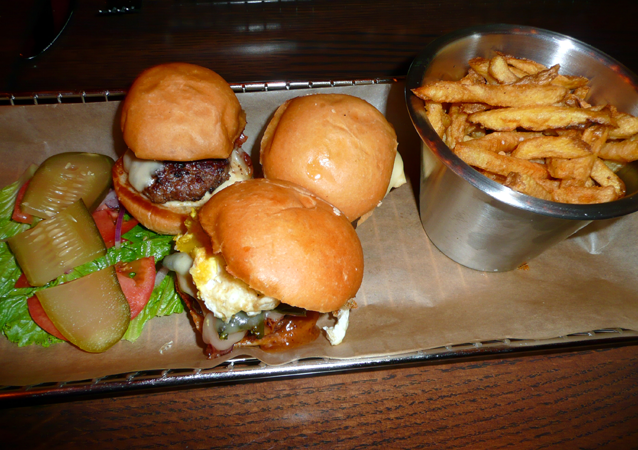 Harpers has eight different varieties of burgers on their menu, while you have your choice of beef, turkey or chickpea patty, chicken breast or wild salmon fillet. My high school finite teacher would be proud that I can still figure out the number of possible choices, and suffice to say it will take you a while to eat through their entire menu. Rather than taste only one burger on our first outing, we opted for the slider option ($12.50), which affords you the luxury of selecting three different mini-burgers and a bowl of their hand cut Yukon gold fries.  Going clockwise around the plate pictured above, I sampled the #6 Umami (brie, balsamic candied onions, tamari glazed mushrooms, white truffle aioli), #8 Deluxe (Monterey jack, avocado, local bacon, roasted garlic-rosemary mayo) and #5 Bull’s Eye (Monterey jack, fried farm egg, local bacon, grilled jalapeños, South Carolina BBQ sauce).  I must admit that I hesitated to order the Bull’s Eye, as the idea of an egg topped burger seemed unappealing. I was sold after my first bite, as this was easily the tastiest thing on my plate.  Don’t get me wrong though, each burger was amazing in their own right. 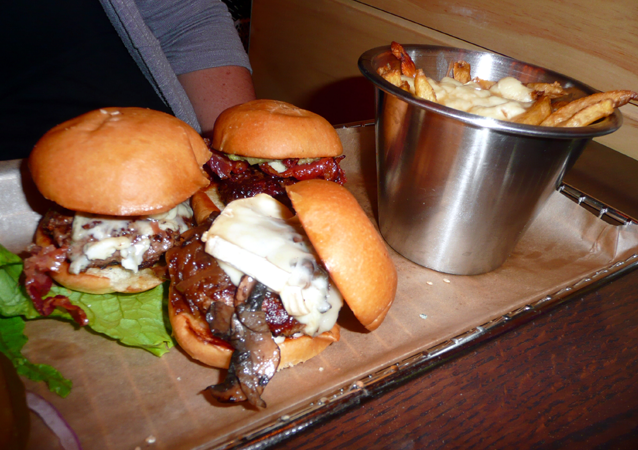 My dining companion opted for the sliders as well, while she ordered two of the same burgers as I did, Umami and Deluxe, she mixed it up by selecting #3 Blue (blue cheese, bacon, tomato marmalade) and a side of poutine.  All in all the burgers were cooked to perfection, just a little pink on the inside, without an obscene amount of grease dripping off of them.  The fries were amazingly crispy and not over salted, however I was less than impressed with their poutine, which was not layered nor mixed very well.  I would likely try one of their seven gourmet dips next time around (roasted garlic-rosemary mayo, smoked paprika ketchup, house 1000 Islands, South Carolina BBQ, Thai red coconut-curry or Blue cheese, White truffle aioli).

Due to the close proximity of our table to the register, we were unfortunate victims of a landslides involving menus and cutlery.  This far from ruined our dining experience, and without asking we were quickly treated to a couple of glasses of wine on the house.  Another great example of the quality service at this exciting establishment.  On our way out we noticed that those waiting for a seat were cramped pretty close to diners, which could be a bit uncomfortable for some.  Otherwise without a proper vestibule, the constant in and out at the front door could make those sitting nearby rather chilly during the cold winter months.  Being busy isn’t a bad thing though, and averall, Harper’s far exceeded our expectations of what a gourmet burger could be.  We’ll be back again soon.