Kingston is in the thick of mid-summer, but that still leaves you, faithful reader, plenty of time to take a day trip out to Prince Edward County to sample the incredible brewing scene that has developed over the past year. From Belgian ales to Munich Helles, the County has the cure for what ails you. We’ll be looking at four of the newcomers on the scene in a two part mini guide, and finding out what makes these craft breweries so special. 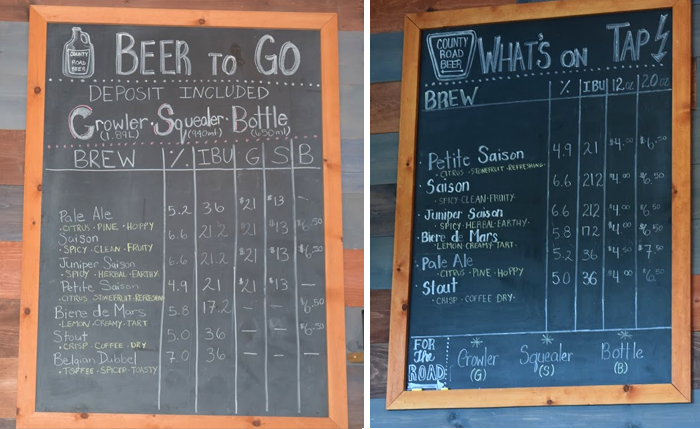 County Road might be the furthest PEC brewery from Kingston, nestled in sprawling lush and green farmland, but once you walk in the doors, you see that the trip was worth it. The brewery itself is paired with Hinterland Wine Company–helpful signs will point you in the right direction–and the owners have taken the greatest of care to create an atmosphere that is sleek yet comfortable. The brewery’s specialty are Belgian-style beers: think funky intricate saisons and heady dubbels. Why did co-owner Chris Dinadis decide to on making the types of beer that aren’t immediately recognizable to the casual beer drinker? “We’re trying to make different beers. We have wine barrels in the back for aging, and we are just trying to make more sours, more brett beers. As much as I love lagers, I’m not looking to make lagers. I know I’ve probably ostracized half the population by saying that, but we are trying to get people more into Belgian beers! We do keep an IPA or pale ale on tap because that is also what the public also wants.”

The use of their own well water as well as hops from down the road means Dinadis and crew are keeping their beer as local as possible; this also goes for the menu on offer. In-house cured meats, local vegetables for salads and sides, farmhouse cheeses are all perfect accompaniments to the beers on tap. Looking around appreciatively, Dinadis says, “I think our big thing is that we are very terroir-based and you can’t get more terroir than our great view and ingredients.”

The Kingston daytripper will have no trouble having a glass or two, surveying the gorgeous outdoors, and count themselves lucky that County Road Beer Company really isn’t that faraway.

Chris Parsons, owner and head brewer of Parsons Brewing Company is passionate, to put it lightly, about beer. Located in a former Bloomfield blacksmith’s shop broken down piece by piece and resurrected on site, the brewery is a long way from Parsons’ garage 40 liter pilot system. “I started in my garage,” laughs Parsons, “We started doing little craft beer tastings with five or six other local brewers!” Parsons’ view of beer-making to is make beers that not only aficionados will love but ones that will also blow their minds. When Kingstonist visited the taproom, we sampled an array of astonishing beers. From the Marysburgh Vortex, a double IPA named after the local Bermuda Triangle-style legend, to the Mousetrap Rye Pale Ale, there is a beer for every visitor on the tap list. When asked about his brewing style, he was candid: “I wouldn’t say that I’m on the cutting edge of beers like all the sours. It isn’t my style. But I glean my beers from Europe. We obviously put our own little twist on it. We do a very traditional Hefeweizen, a very traditional German pilsner with all German hops. We have a lot of experimental beers. We have a massive focus on stouts, starting with Grandpa Miguel’s coffee stout. My wife’s father owns a small coffee plantation in Guatemala so we get beans from him and Henry (Willis) over at Humble Bread roasts them for us.”

With his wife and partner Samantha, the couple have created a warm and cozy ambience for the taproom and bottle shop. Exposed brick runs the length of the back of the bar with a giant chalkboard beer menu, seating runs the gamut from communal tables to intimate tables for two. Overlooking the downstairs is a small loft area that Parsons hasn’t decided if it will be more seating or perhaps a small stage for local musicians. They just put the final touches on an outdoor seating area, and the taproom also offers an array of American Southern comfort food and Mexican cuisine. Parsons is located right before you head into Picton proper from County Road 49. Stop in, hoist a glass, and if you see an animated fellow serving you from behind taps, ask Chris Parsons all about his love of beer. You will be happy he did.