Opening a (mostly) take-out Greek restaurant right across the street from the well-established epicurean institutions of Minos Village and Minos Take-Out takes some gastric guts. However, Greektown did just that in 2010 and has since been holding its own in the battle of the Greeks.

The last few months have been crazy-busy for both Curtis and I workwise, so more often than we would like to admit, we’ve thrown together a last-minute salad for dinner or picked-up meals to eat at home. In our quest to find fast and fresh take out, we have found ourselves returning to Greektown to satiate our palates time and again.

Greektown boasts a large menu covering Greek favourites like moussaka, tzatziki and souvlaki to more “non-traditional” Greek food like pasta and pizza. If you are in the mood for something different, call ahead 24 hours and you can order a roasted leg of lamb, roasted goat, or red snapper, and you can even pick up some fresh meats to grill at home. And then there are the desserts, from cheesecake to galaktoboureko to cannoli, which are alluringly displayed in a fridge case by the cash. We rarely make it out of there without at least a piece of baklava to go.

One of the highlights of Greektown’s menu is the pre-set combo deals. From dinners for two to enough food to feed a small army, there is something for everyone. On our last visit we ordered the Combo #3, which includes a whole rotisserie chicken, four pork souvlaki skewers (we substituted two chicken), a small Greek salad, a small rice, small potatoes, a small all-dressed pizza, four buns, a cup of chicken sauce and a cup of tzatziki for $42.99. We opted to add a rack of bbq ribs for an extra $6.99 and upsize the rice for $2. 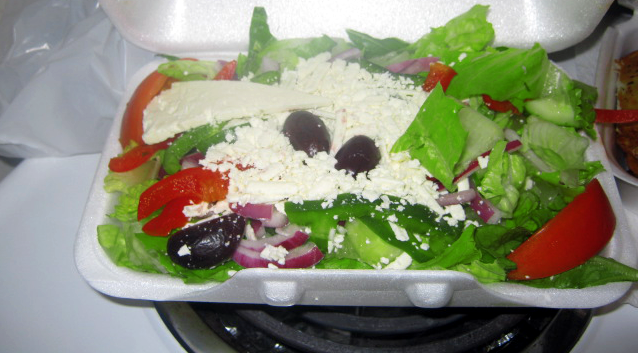 Greektown’s Greek salad was top-notch with a good balance of vegetables (romaine lettuce, red onions, cucumber, tomato, and green and red pepper) with a generous amount of feta cheese and kalamata olives. Their homemade vinaigrette is tart and savoury. What makes this salad standout is how bright, crisp and fresh all of the vegetables are. The salads are clearly made from produce prepared that day and do not come out of a bag. Greektown also does caesar salad with real bacon bits and homemade dressing that is very popular.

Now on to the meat: The ribs were laden with a sweet and smoky bbq sauce, but they also tasted like they had been marinated. They were generously sized and the meat fell off the bones. The rotisserie chicken was as tender as the ribs and even the breasts, which I often find can be dry in rotisserie-style chicken, were juicy and flavourful. The ever-popular pork and chicken souvlaki, marinated in lemon and various spices, weren’t overdone; they were grilled to perfection. The meat dishes work well with the sauces provided—a chicken sauce, which tastes similar to Swiss Chalet’s famous version but less salty and the tzatziki which isn’t overpowering, but has enough bite to satisfy garlic lovers.

We usually ask for just rice instead of rice and potatoes and Greektown is very accommodating. For the review, we tried the fried potatoes and found them a bit bland. To be fair, we don’t usually enjoy take-out Greek potatoes, but much prefer the roasted potatoes served at Grecos. For us, the savoury rice is definitely the way to go; Curtis firmly believes in economies of scale and uses the (reasonably-priced) size upgrade to get a small mountain of rice because it keeps well and allows us to get MANY meals out of the order (easily eight or nine considering there’s so much meat). Greektown’s combos are also definitely a tasty, cost-efficient, and quick option for when you have company! 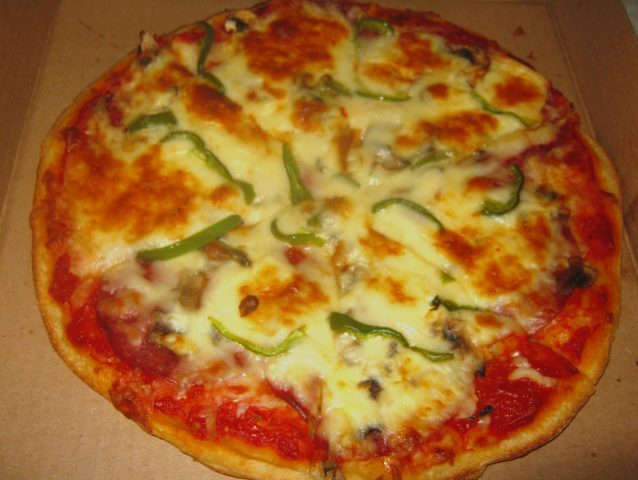 To this point, Greektown has provided everything we’d expect in Greek take-out, yet they still have a surprise up in store. You might expect the pizza at such a restaurant to be generic but their version, part of many combos but also available a la carte, is delicious. Worth ordering by itself, the pizza is made from fresh dough with plenty of quality cheese, homemade sauce and fresh toppings without being greasy.

If you’re in the mood for quality Greek food, with an impressive array of options then you need to try Greektown, if you haven’t already done so. Judging by the number of their reusable take-out bags we’ve seen around Kingston, they’ve found a niche. While competing against Minos might have seemed like a mere mortal challenging mighty Zeus, the food gods have smiled on Greektown.

One thought on “Greek Town”