So I am moving to Calgary! I found a job there so I will be leaving at the end of the month. I am excited about the move back but I have really enjoyed my culinary adventures in Kingston over the last 2.5 years. One of the greatest things that has happened to my blog has been the inclusion of my posts on Kingstonist.

As part of Kingstonist’s 3rd birthday, I received a coveted Kingstonist tee, while I met with Harvey to do the hand off and chat over a meal. Deciding on where to eat wasn’t too hard. Despite the fact that I eat out a lot… there are still countless places that I haven’t tried.

We settled on Grecos as Harvey had never been there before. Grecos is my go-to for Greek take-out as the portion size is huge and the flavours are amazing. There is nothing that makes my call shift go faster than 2 pork skewers, a big side of potatoes with rice, bread with tzatziki, and a side salad. Yes guys, Grecos comes with THAT much food when you order delivery. It is like a shotgun to the stomach. 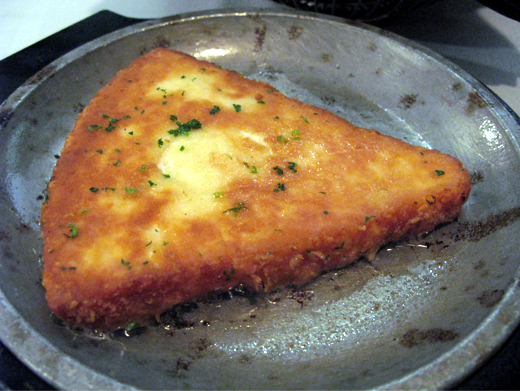 This was the Saganaki (wedge of delicately flavoured cheese, flambeed at your table) for $7.95. I always get this dish when I go to a Greek restaurant. What can I say? I like spectacle and fire and this dish has both. This Saganaki was interesting in that it seemed to be breaded resulting in a nice crispiness to the cheese. The portion size was quite generous. I might’ve wanted it flambeed a bit longer to make the cheese a bit gooier. 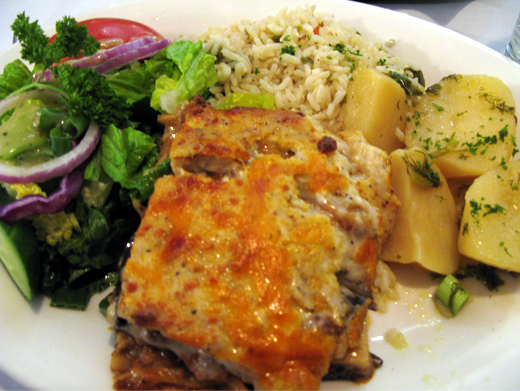 Because I always order the Double Souvlaki when I am at the hospital, I had to try something else for this meal. This is the Mousaka (alternate layers of potato, eggplant, ground beef, topped with bechamel) for $10.95. You can again see how large the portions are. The rice nicely soaks up sauce while the potatoes are tart and zingy. The salad is pretty fresh and keeps the dish from being too rich, though you still feel heavy after eating all of it. The Mousaka was pretty good. The eggplant, potato, and beef was nice but I wasn’t a big fan of the bechamel. It was sort of chunky. 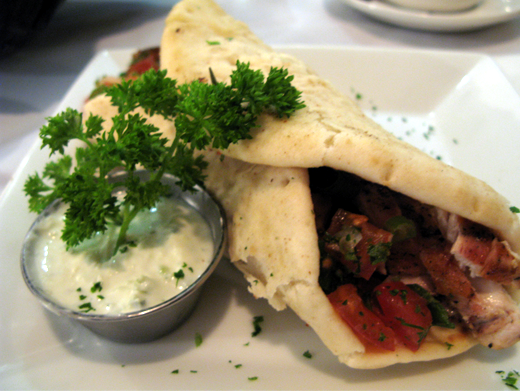 J didn’t feel like eating a big meal so only ordered a Chicken Pita (topped with onions, tomatoes, and tzatziki) for $5.95. I didn’t get a chance to taste it but J said it was pretty good.

Overall, Grecos remains my personal top pick for Greek in Kingston. The portions are generous and the food is good. I probably would stick with the Double Souvlaki next time, though the dishes we tried today were pretty good too. I am going to miss Kingston.