For a small city in between major centers, we sure are lucky to have such a wide variety of fresh, locally sourced restaurants.  The food scene in Kingston has thrived and this includes everything from smaller, ethnically diverse cuisine to gourmet restaurants, burgers and breakfast.  Most recently, we’ve seen an influx of chains making their way into our downtown core.  In this post, Julia Segal explores these new additions and their effect on Kingston’s food scene and the historical value of our downtown. Much debate ensued.
—————————— 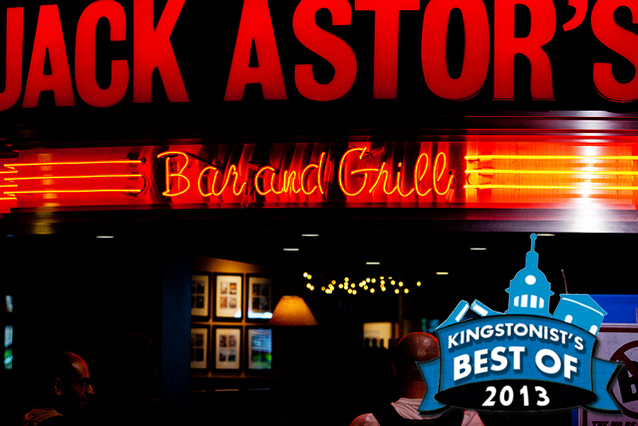 Restaurant business is a tough business. Profit margins are low – often 10-15%, and costs are always increasing. They say that 1 in 4 restaurants that open will close within a year. In Kingston, the density of restaurants downtown is very high, and although the natural lifecycle of openings and closing occur every year, there is an impressive balance of long-established businesses as well as popular new spots. Kingston is undeniably a good place to be a restaurant – despite stiff competition, Kingstonians are willing to pay for a good meal out and are open to trying new things. If a restaurant is able to carve out their place in this town, they are sure to find a dedicated following.

Luckily for restaurateurs, our downtown eating preferences seem to favour ‘the little guy’. The abundance of independently and locally owned restaurants in the core is yet another example of Kingstonians being excellent supporters of local businesses. Longtime staples like Brew Pub, Windmills and Chez Piggy have been around for decades. Recently, though, the opening of two major chain restaurants – Milestones and Jack Astor’s – has arguably changed the face of downtown Kingston.

Thus far, downtown Kingston has existed with a relatively small number of full-service chain restaurants. Except for in the hub, the Keg and Lonestar were essentially the only major restaurant franchises operating in the downtown area. Tir Nan Og is another example of a franchise that many locals do not even realize is a chain. Even so, over the years they have established themselves as fixtures in the culinary landscape. The Keg is always busy, tucked into its discreet hideaway on King St, while Lonestar is a bit more conspicuous blasting music from its patio in the summertime. Despite this, many downtown dwellers have displayed a range of emotions regarding the opening of both Milestones and Jack Astor’s.

The opening of Milestones and Jack Astor’s has certainly brought new business into the downtown core. In fact, many downtown restaurant owners feel that these new spots are attracting crowds from the West End who wouldn’t normally make the trek, and that their own clientele are as faithful as ever.

Moreover, the buildings that Milestones and Jack Astors now occupy (the old S&R and TD Bank offices) are historical buildings that have been empty for years. These locations are beautiful but come with a hefty price tag – one that can arguably only be footed by major chain operators. Luckily, the City of Kingston had a significant say in the renovation of the façade of these buildings, including the signage (as a result we have dodged a neon, donkey-adorned sign.) Unlike the eyesore Lonestar, these ones blend in with the lovely brick and limestone aesthetic of the area.

But one problematic observation we are hearing is that these openings have coincided with closures of some independent locations. Aroma, one of my favourites has recently shut its doors, alongside Zappa’s, and The Pasta Shelf. Tango, once an institution, closed up merely one week ago. So what’s the story?

To be fair, January and February are slow months for all restaurants, and ones that have struggled to make ends meet through the holiday season will often throw in the towel around now. If we’re talking recession, chain restaurants have a lot more wiggle room when it comes to liquidity in hard times. If certain locations are losing money, there are always others to bolster sales and diversify their risk. Since the restaurant world is a game of saving dimes, chains benefit from lower costs thanks to economies of scale.

For single independent locations, it is a lot riskier. Even just having two or three restaurants (like Le Chien Noir with Harper’s and Atomica) can help ease the burden of declining business. Restaurants located in hotels also have a better chance of staying afloat, especially if the hotel has a stake in the restaurant, as hotels tend to have a higher profit margin than restaurants do.

Whether we like it or not, these places are probably here to stay. And yet, the market isn’t quite saturated. Despite sad closures, there have recently been wildly successful openings. Good luck finding a seat at Red House any Thursday, Friday or Saturday evening. Geneva Crepe Café is another example of a place that quietly opened 2 years ago, and has since established itself as a must-try for locals and visitors alike. There is a lot of buzz around MLT DWN, and Maru has put the spotlight on the ramen trend sweeping North America. We can only hope that as discerning eaters we will continue to vote with our dollars and keep the most deserving places afloat for years to come.

Time will tell the effect these chains will have on our food culture in Kingston. Some people say that Kingston is a testing ground for chains (remember when Tim Horton’s tested their new sizing scheme and confused us all?). Could it be the beginning of a trend moving into the previously independent downtown core? Should we gear up for a waterfront Montana’s or Swiss Chalet? On the other hand, we all know the saga of poor Mexicali Rosa’s – it’s former building now dubbed the “black hole of businesses.”

How will this change the business of established joints and influence the success of new openings? As the city with the most restaurants per capita in the country, everyone is vying for share of stomach of our small population, and we can only eat so much.