Food trucks have been a hot topic for Kingstonians over the last 4-5 years. We saw a huge influx of trucks in and around the downtown core, in parks, and in parking lots in the west end. From tacos and burritos to barbecue and gourmet fare, food trucks were becoming a very present part of the ygk food scene. We have had some lively conversations on Kingstonist including reviews, discussions on policies and showdowns over which truck reigns supreme. Most recently we noticed that our beloved trucks were showing up less and less on our streets and more and more at private functions and festivals. We did a little digging to find out why Kingston’s food trucks were disappearing from Kingston streets. 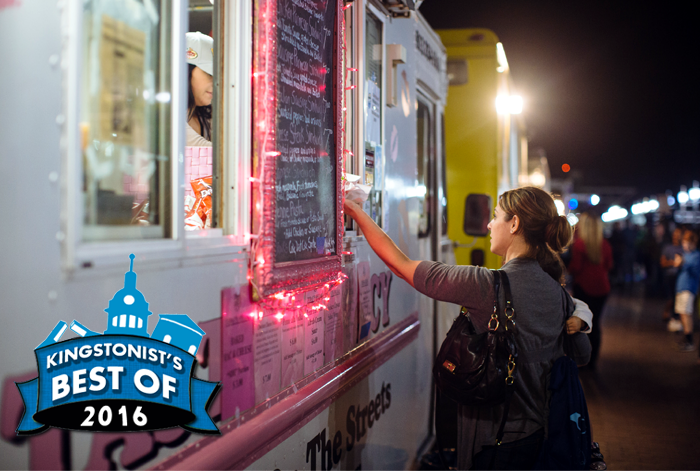 Where have all the food trucks gone? That’s the question many Kingstonians have been asking this Summer, as local mainstays including the makers of the best burrito in Kingston, Mission Street North, have yet to roll out of hibernation. Has this city’s food truck revolution cooled down, or is there something else at play here?

Why have so many food trucks vanished from Kingston?

Over the past three summers, food trucks have become an increasingly popular casual dining option for those looking to grab a quick bite during their lunch hour, as well as those seeking sustenance at local music and beer festivals. By the end of the Summer 2014, we seemingly could not get enough of the gourmet offerings served up by Farm Girl and Mission Street North, while Burrito Bunker, Roamin’ Komodo, Fordino’s Pizza, Two Nuts in a Food Truck, Logan’s Lunch and Smokin’ Carnivore also earned followings thanks to their tasty fare. While the size of Kingston’s fleet of food trucks may pale in comparison to larger cities, the aforementioned group of eight could very well represent the peak of the local food truck love affair.

Since then, Roamin’ Komodo and Burrito Bunker have deleted nearly all traces of their existence from social media, and they have otherwise fallen off of the the food truck map. Mission Street North, a mainstay at The Brooklyn and many local area festivals, has had some hiccups getting on the road this summer, but they are considering rolling in for some catered work and festivals later on this season. The same thing goes for Two Nuts in a Truck, who have opted not to set up shop at their usual location along Wellington Street, in favour of focusing on catered events. Farm Girl is also on a catering kick, but they still maintain a presence around the city. All that to say, in a matter of two years, nearly half of Kingston’s beloved food trucks have vanished or otherwise chosen to focus exclusively on catering large events and festivals.

When researching food truck trends in other cities, it’s abundantly clear that these rolling gourmet kitchens are as popular as ever, however many within the industry stress that they are a business just like any other. In that respect, a food truck must remain profitable in order for their operators to keep rolling on from one season to the next. Considering the cost of fuel, ingredients, labour, promotion, insurance and licensing, the bills add up quickly, and that’s so long as everything goes to plan. When something catastrophic happens to a truck or the equipment relied upon to make food, the dream of owning a food truck can turn into an expensive nightmare.

Taking a step back and looking at the situation through the eyes of a business owner, it makes sense that many local food truck operators are moving away from the traditional operating model of showing up to a park and leaving business to chance. Instead, many are veering towards the guaranteed profit and security afforded by catering larger events. Of course, that approach has made it difficult to find our favourite trucks, and ultimately satisfy cravings whenever they may strike.

Do you think the trendiness of food trucks is subsiding? Is Kingston too small of a city to support more than half a dozen trucks? Was the food offered by those who have disappeared good or not so much? Share your thoughts and show your love for your favourite food truck below.