When I sat down last August and took stock of the new burger and poutine restaurants opening in Kingston, I never would have imagined the response from Kingstonist’s readers. To date, the epic saga of the Limestone City’s Burger/Poutine Wars has gone on to attract a record number of comments, proving that Kingstonians have an insatiable appetite for the likes of Harper’s Burger Bar, Smokes Poutinerie, Five Guys Burgers and Fries and all the rest.  While we haven’t published full reviews of all of the new contenders, we’ve made the rounds and have a pretty good idea of their respective strengths, and staying power.  In spite of our conscious effort to limit reviews to locally owned, non-chain restaurants, today’s assessment of Five Guys Burgers and Fries justifiably breaks the rule. 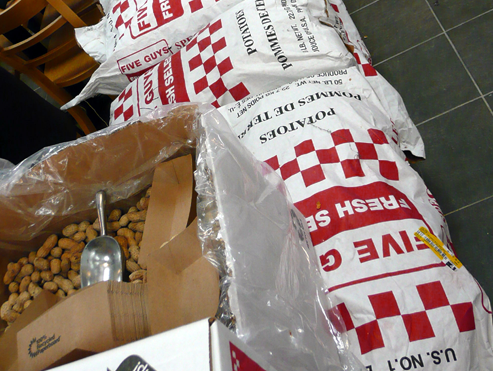 In recent months, Five Guys Burgers and Fries have been aggressively expanding in the US and Canada, while they opened their Kingston-based location on November 15th.  When you enter the doors, you’re struck with a pretty plain interior that has a slight vintage feel to it thanks to the red and white checker board tiles on the walls.  Similar to Smokes Poutinerie, Five Guys has bags of branded potatoes stacked inside, which I believe are more for decoration than anything else.  They’ve also framed some of their accolades, and reviews (hint, hint).  To keep you both occupied and satisfied while you’re waiting in line and for your order to come up, Five Guys offers free peanuts for you to snack on.  Do not fill up on these and risk not being able to finish the main course. 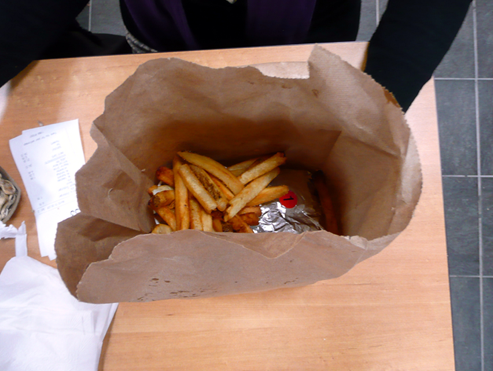 Their menu is simple, as they offer 4 types of burgers, and 3 veggie options.  Double patties are standard at Five Guys, in which case a hamburger will run you $6.29, while the bacon cheeseburger costs $7.79. If you opt for a little burger, or in other words a single patty, you’ll pay $4.29 for a basic hamburger and $5.29 for one that comes with bacon and cheese. With prices that are slightly more expensive that other fast food franchises, it’s a good thing their toppings are free of charge. You can top your creation with lettuce, pickles, tomatoes, grilled mushrooms, grilled onions, green peppers, jalapeños, ketchup, mustard, relish, mayo, as well as A-1, BBQ and hot sauces.  Fries will run you an extra $3.19 for a small and $4.49 for a large, while the latter is more than enough to share with a friend.  Sadly, Five Guys Burgers and Fries does not offer combo deals, which again makes it is a bit more costly than McDonald’s, BK and the like.  Even so, the extra couple of bucks you’ll spend are well worth it. 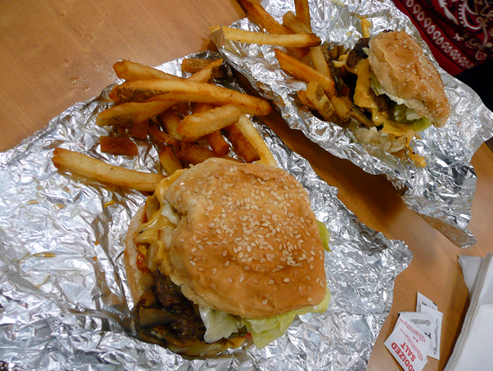 After you’ve placed your order, you’re handed a receipt and asked to take a seat while your meal is being prepared.  Five Guys doesn’t cook their burgers until an order is made, and although there were a few orders ahead of ours, we only had to wait for 5 minutes.  When you’re number is called, you are presented with a big bag o’ food, including burgers which are numbered for easy identification, and fries that litter the bottom of the bag.  I was initially a bit put off by the sloppy presentation, but after I unwrapped my burger, their system made sense.  As you can see in the photos, a Five Guys burger is far from neat and tidy, as they’ve got toppings and cheese falling out from all sides.  The standard double patty is honestly impossible to enjoy without a bit of spillage.  Shy diners should be encouraged to sit in the corner if they don’t want their sloppy experience to be seen by others. 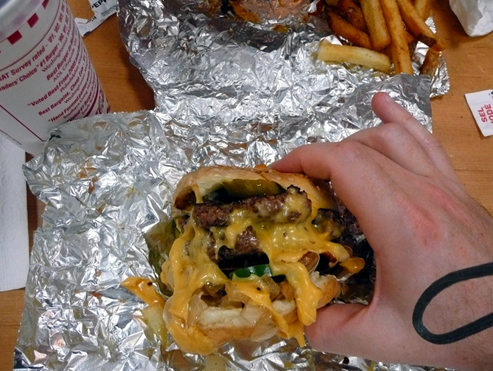 Prior to our first visit last week, I read some reviews that were critical of Five Guys buns, while the general consensus was that they were too flimsy and often squished beyond the point of containing the burger and toppings.  While our buns were similarly malformed, they were not soggy, nor did they lessen the overall taste.  Save for Harper’s, which is in a totally different category due to cost and alcohol, my Five Guys burger was one of the best I have ever tasted. It was juicy without being greasy, and a little pink on the inside, just the way I like it.  Within the realm of comparative fast food franchises, you will be hard pressed to find another burger that trumps it in terms of taste.  Yes, it’s that good!  Sadly though, I can’t say the same for the fries.  Since I’m not a big fan of ketchup, and Five Guys hasn’t figured out that Canadians like gravy, I had nothing to dip my fries in.  Perhaps next time I’ll request some mayo on the side and enjoy them Holland style.