In 2010, burger and poutine restaurants were on the rise in Kingston, making our Burger/Poutine Wars poll one of our most popular and commented on posts ever.  The response was so epic that we even revisted the poll in 2011.  2012 brought us a debate on the best pizzerias in Kingston, also sparking much commentary.  Clearly Kingstonians are passionate about their food.  This year, we saw numerous food trucks take over various locations around the city, many with a focus on locally sourced, gourmet fare.  Undoubtedly, Farm Girl made a splash with its long line ups in City Park as well as its many private gigs. Melinda gives us a balanced look into what makes Farm Girl such a crowd pleaser.   Whether your taste buds were wowed or simply satisfied, Farm Girl was, and will likely continue to be, one of the most popular and well-known food trucks in town.
—————————— 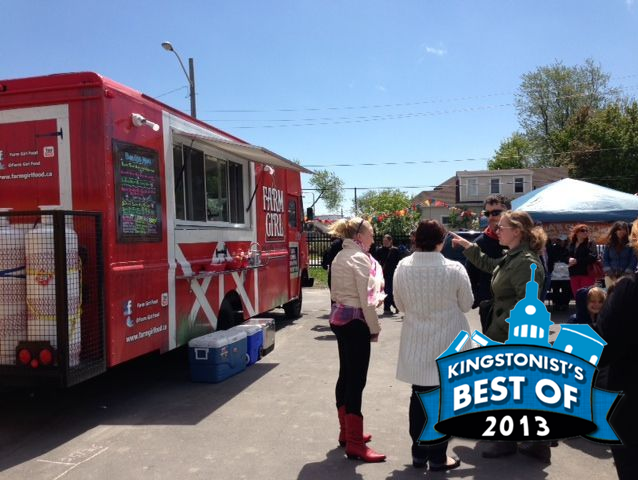 Undoubtedly, one of the most anticipated events of Spring/Summer 2013 for many Kingstonians was the opening of Farm Girl Mobile Food Co. Part of the trending gourmet mobile food eateries hitting the streets of North America, Farm Girl features “Betty Lou,” an adorable mobile food truck in the design of a big red barn.

The excitement started months before Betty Lou’s arrival, with a brilliantly executed marketing campaign, including a website with bright and colourful photos that could instantly induce stomach growling, a Facebook page and Twitter account detailing potential recipes and specials, and multiple media appearance in local and even national media venues. I’m sure that many of you were (I know I was) salivating in eager anticipation of locally sourced, homemade creations by Tamara B and her team of “Farm Girls.” 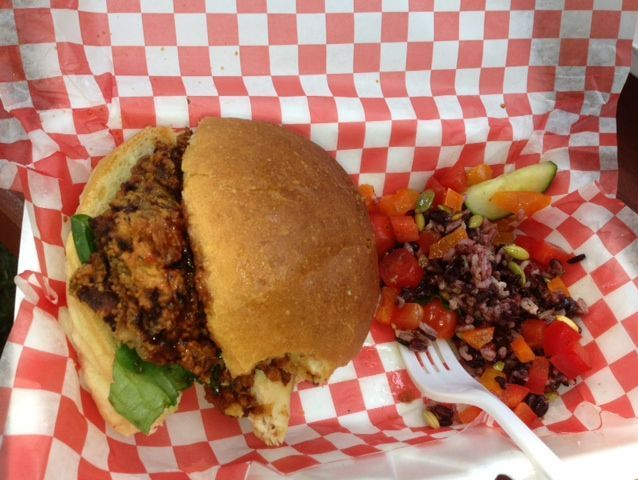 My partner and I braved the cold and hour-plus wait to try Farm Girl’s fare on her opening day (May 2013) at the Memorial Centre Market. Since then I’ve followed Farm Girl from her spot at the Memorial Centre to her rather unfortunate spot at 677 Princess St. to her current location in City Park. I’ve been seven times and have had a chance to taste a variety of dishes from her southern fried chicken to her homemade potato and cheese perogies, so I feel like I’ve tried it enough to make a fair assessment.

Farm Girl is definitely popular with the lunchtime crowd. There has been a big lineup during each of my visits (I suggest going earlier than 12:00 PM if you can). Service is very friendly and as quick as can be expected with it being so busy. Each time I’ve waited between 10-20 minutes for my order, which is more in line with restaurants than what we usually think of as food truck fast food where everything is thrown in a fryer. Even though Farm Girl is truck-based, it’s not the “traditional” food truck we have seen in Kingston, as it offers gourmet fare and everything from soup to ice cream! 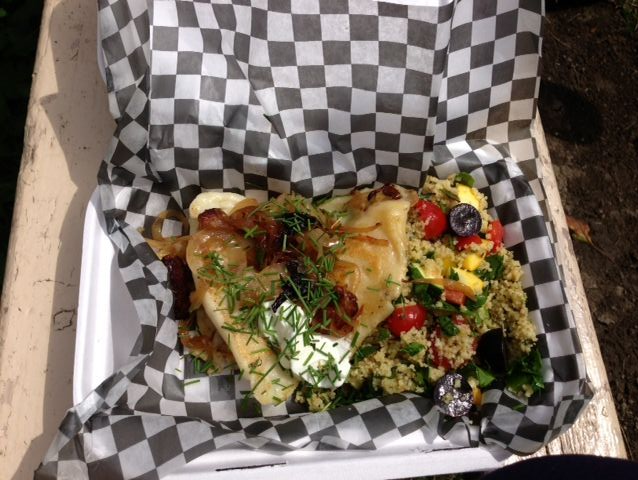 I’ve never been disappointed with my meal, but there have been some dishes that I enjoyed far better than others. For example, the pot roast sandwich is ingenious, and her southern fried chicken pairs flawlessly with the spicy and savoury Farm Girl BBQ sauce. As someone of partially-Polish ancestry, I know the time and effort that goes into making the perfect perogie and Farm Girl’s are just that and topped off with local bacon and chives/fried onions.

However, not all dishes were as memorable. I have found that a few of the couscous/rice side salads have been a bit bland. Last week, I ordered summer sweet pea salad with a mango dressing. However, I didn’t realize until I got to work that it was undressed and it was too late to go back. While I was disappointed, such oversights happen at all eateries. In this case it’s more difficult to correct your order from a food truck, so be sure to check yours before heading back to the office.

One thing that I have noticed is that prices have increased since Farm Girl opened. For example, the same perogie meal (three perogies plus a side) saw what I thought to be a pretty dramatic increase from $9 (June 2nd) to $13 (August 2nd). Most meals (with side) will run you $12-$13 (tax included), but there are some items that cost a few dollars more. I do appreciate that serving homemade and locally sourced dishes is time consuming and can be costly, but I’m not sure if that case be made with the bottles of water and cans of pop that are sold for $2.00 (in comparison, the three chip trucks in the area sell their water and pop for $1 ).

Aside from some great food, I give Farm Girl credit for all of their philanthropic efforts in the Kingston community. From donating unsold food to Martha’s Table to raising money and sharing profits with local charities and community groups, Farm Girl is a great example of giving back.

Have you tried Farm Girl? What are your thoughts? Please share your comments below.