Last week, Kingstonist challenged you to check out “Fare on the Square,” a local-foods-by-local- restaurants event held this past Saturday in Market Square. Unfortunately, Mother Nature did not cooperate and it rained on and off for most of Saturday. However, undeterred and dedicated Kingston foodies, who didn’t mind getting a little wet (alright, soaked), grabbed their umbrellas and gathered on the square for locally-inspired fare. 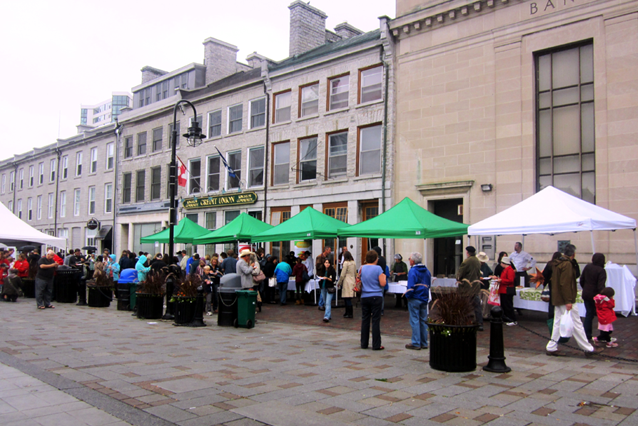 While the weather meant that some of the advertised events (e.g. wagon rides) did not take place, I was disappointed to see that Fare on the Square, in general, was significantly smaller than in previous years. Last year, nine restaurants participated while only five did this year. I had originally suspected this was due to last-minute cancellations because of the weather, but only five restaurants were listed on the event program. While I enjoyed the heirloom tomato tasting by Loving Spoonful, I missed the complimentary corn roast, usually a highlight of the event. I overheard that it was not included because of this year’s poor corn crop.

Once we arrived and scoped out some key shelter under the food tents, we were excited to get tasting. Five restaurants: AquaTerra, Harper’s Burger Bar, Le Chien Noir Bistro, Olivea, and West Seventy6 Grill, provided samples for $2 apiece.

First up was West Seventy6 Grill with a Pork Slider with bacon, cheese, tomato ceviche and chimchuri, which featured pork from The Frugal Farm, veggies from Honey Wagon Farms and herbs from Patchwork Gardens. This dish set the bar high with a nice mixture of tastes and textures. Rather than a tasteless pork patty, it was juicy, seasoned, and savory and I really liked the homemade ceviche and herb relish/salsa that gave the slider a distinctly South American feel. 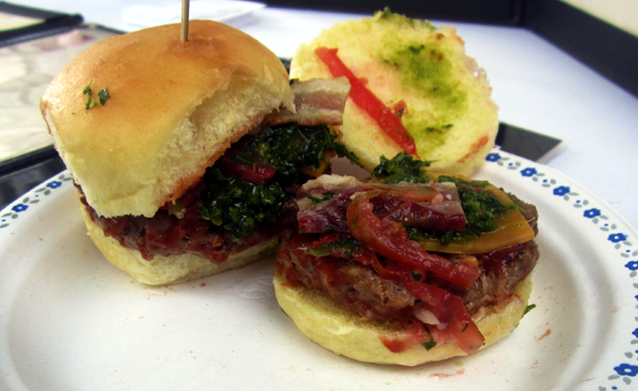 Le Chien Noir served up Maple Candied Smoked Salmon from The Salmon House, Patchwork Gardens’ red onion jam, micro-greens from Honey Wagon Farms, and crème fraiche on house brioche. The sweet, smoky salmon was well-balanced by the tart onions and crème fraiche. Plus, who doesn’t love a homemade brioche? The sample was also the perfect size for a tasting menu— one (or two) bites and you were done. No mess, no fuss. 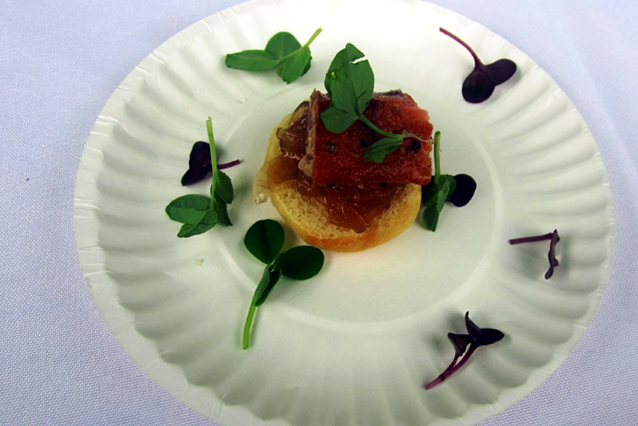 Harper’s Burger Bar pulled a fast one on us and didn’t serve their famed burgers. Instead, they featured Hannover Farms’ Pulled Pork filled tacos on corn tortillas complete with a condiment bar of: salsa rosa, salsa verde, chipotle lime mayo, pickled cabbage, cilantro, and their house queso fresco. I thought this was a fun and tasty dish. The only downside was the tortilla itself: it was tasteless and dry. The taco fell apart as soon as I tried to pick it up. I loved the idea of a condiment bar, which was actually very efficient given the number of people in line. The sweet and tender pulled pork was the highlight, closely followed by the crunch of the pickled cabbage. 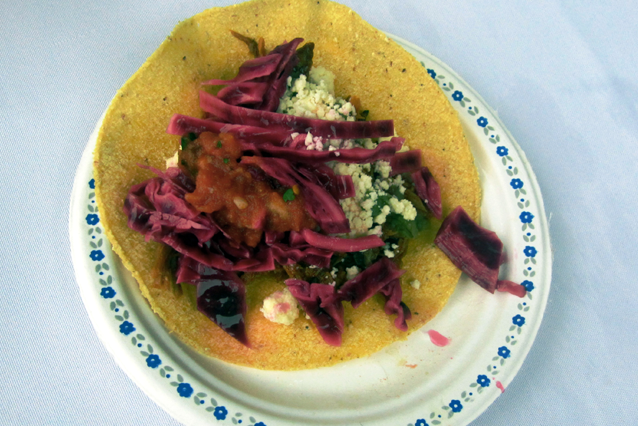 The only vegetarian dish of the day was Olivea’s Fall Ratatouille with Polenta featuring veggies from Patchwork Gardens, Ravensfield Farm, The Kitchen Garden, Irisa’s Produce and Honey Wagon Farms. This spicy version of a traditional ratatouille (stewed vegetables), was packed with a hearty mix of beans, tomato, eggplant, mushrooms, red pepper and squash, and mellowed by the creamy, rich polenta. The best part of this dish was the kernels of corn in the polenta, which provided a surprising burst of sweetness in every few bites. 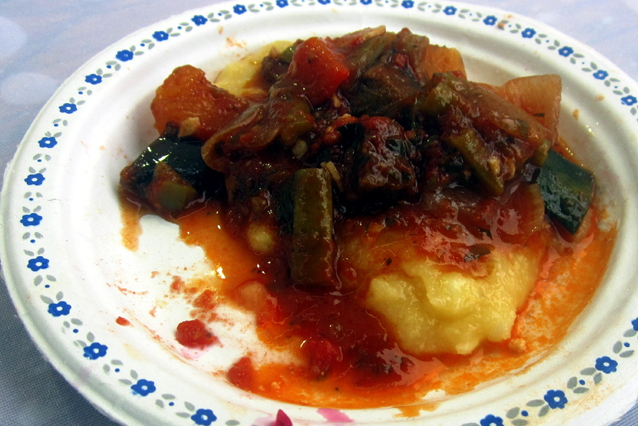 And last but not least, AquaTerra served a Duck and Rabbit Terrine with Pear Chutney on focaccia with duck and rabbit from Maple Lynn Farm and pears from Havenhill Acres. I question their choice to serve rabbit, which I can’t imagine would be too popular, at a public event. I guess they get points for being unique. While I didn’t try the terrine (I opted for the pear and focaccia), friends said it was as good as any pate, but didn’t really stand out in the sample. The pear chutney, however, was fresh and delicious.

Despite the fact that the weather put a bit of a damper (pun intended) on the event, Fare on the Square is a great way to showcase local food and an opportunity to sample from some of Kingston’s finest dining establishments. I will definitely be returning for years to come.

What was the best dish of the day? West Seventy6 Grill’s Pork Slider, a great South American twist on a classic, was the unanimous winner among our group. I even went back for seconds!

If you attended this year’s Fare on the Square, weigh in on which dish you thought was the best.

3 thoughts on “Fare on the Square”