Yesterday we gave you Part One of our review of Fare on the Square. Today I’ll show you what other yummy items we sampled last Saturday. 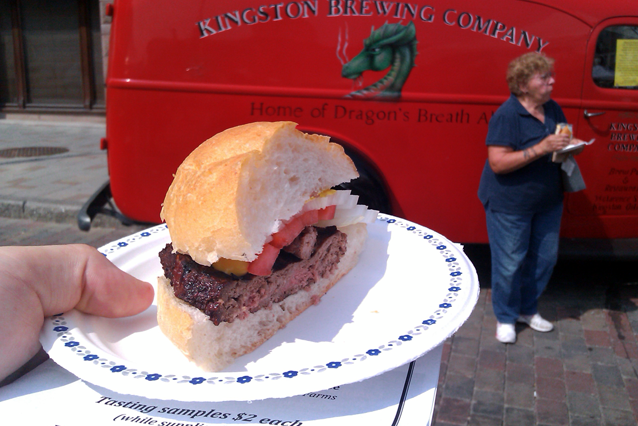 Our next stop was The Kingston Brew Pub. They were offering Local Bison Burgers. Once again, I didn’t sample since I don’t really like Bison and I was also not going to waste a ticket on yet another repeat from last year. Harvey enjoyed the burger enough but said it was fairly dry and not overly exciting. If Harper’s had been there (they had to cancel at the last minute due to staffing issues) we both would have spent a ticket on one of their burgers instead. 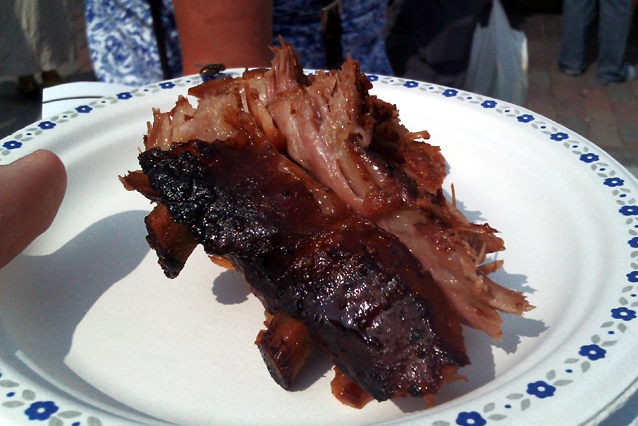 This was probably my biggest surprise of the event. Zappas was serving Local Pork Ribs and Homemade bbq sauce and they were delicious. I say I was surprised because I haven’t heard great reviews of the food at Zappas but then, they’ve been open for a while now and have probably worked out some first year kinks. These ribs we flavourful and the meat just fell off the bone.   After this experience I’d be willing to give them a try. 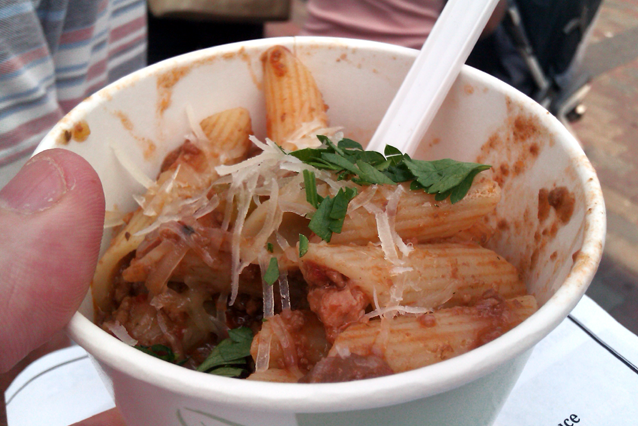 Olivea was my favourite last year with their incredible Italian Wedding Soup and they did it again this year with a delicious Penne Bolognese with Local Pecorino. The sauce brought me right back to my Italian upbringing and the penne was cooked to perfection. I have to say that the service was the friendliest of the bunch as well. I went back for more.

You’ll notice that we didn’t try everything so I can’t say much for what Le Chien Noir or Atomica had to offer. I do eat at both of these restaurants often and would recommend them in a heartbeat. I skipped Atomica simply because I don’t like lamb and they were offering Local Lamb Sausage, Cloverfield Apple Relish, Celtic Blue Cheese and House-made Focaccia Bread. I didn’t visit Le Chien Noir because they were serving the same thing as last year: Grilled Flank Steak on a bed of Roasted Baby Potato and Green Bean Salad with Spicy Heirloom Tomato Jam. Sounds great, but last year I found it really hard to eat on paper plates with plastic utensils. I’ll save the steak for my next visit to the restaurant.  Did you try these dishes?  What did you think?

All in all, I would say that this year’s Fare on the Square was a huge success. I challenge the restaurants to come up with something new for next year though. With so few participants, it’s disappointing to see repeats. Some more veggie fare would be great too.