Last summer, Kingstonians were tempted with a fresh, new dining establishment whose angle was “seafood shack meets Baja Mexico”.  From Tim Pater, the man who made le Chien Noir, Atomica and Harper’s Burger Bar irresistible destinations on the local culinary map comes Dianne’s Fishbar Restaurant.  Dianne’s is located kitty-corner to the Prince George Hotel in the former long-standing home of Stoney’s, and more recently, the short-lived downtown experiment that was the Pasta Shelf.  Conceptually, a fishbar seems like a logical fit for this historic downtown property, as it’s mere steps away from Kingston’s waterfront and a bustling tourist hub.

After successfully avoiding Dianne’s all summer long, we finally took the plunge knowing that she’d found her sea legs.  From the curb, Dianne’s presents a wrap-around patio that offers fantastic views of Ontario Street, and front row seating for the Summer’s main events such as Canada Day, Buskers, and so on.  Upon entry, diners are met with a mermaid painted on the wall, chunky industrial fixtures and modestly posh decor that has a certain ship-like feel.  There are ample windows brimming with natural light if you end up here during the day, and save for the flat screen, Dianne’s is romantically lit for intimate date nights.  Unlike Harper’s, Dianne’s boasts a full bar area with seating, which doubles as the serving window, making it a busy hub of activity during meal service.  Did I mention that they have over 24 varieties of tequila for you to sample?

For the uninitiated, Dianne’s menu could easily be considered overwhelming, but the diverse selection is a real plus.  With separate yet similar lunch and dinner menus, there’s more than enough to tempt you, even if you don’t consider yourself crazy about fish.  In fact, before we’d even stepped foot inside Dianne’s, we were already planning our second and third visits to ensure that we could sample all of the fare that caught our eye.

Dinners during the supper hour are met with freshly baked rolls, topped with coarse salt and a side of butter.  Properly firm on the outside, while being soft and light on the inside. The coarse salt sprinkled on top lent a surprising wow-factor to this free starter.  Moving on, the caesar salad ($8) is composed of little gem lettuce, lemon-parmesan croutons, ‘seed to sausage’ bacon and house dressing.  I was definitely satisfied with the portion size, price and flavour, although I would have preferred slightly less lemon and more garlic.  Next up is the mixta ($9), which is arugula tossed with tomato, avocado, green beans, radish, corn, queso fresco, toasted pepitas and mostaza vinaigrette.  Again, a great combination of flavours and portion size.  I would be remiss if I did not comment on the lovely bowls Dianne’s salads are served in.  They really drive home the quaint coastal atmosphere.  We also sampled the fresh oysters, while the selection varies based on what’s in season and otherwise available.  Other noteworthy apps include: spicy fried Rhode Island calamari, a selection of steamed PEI mussels, seafood, poutine, Dianne’s Down East Fish Cowder, and three varieties of ceviche, their so-called specialty. 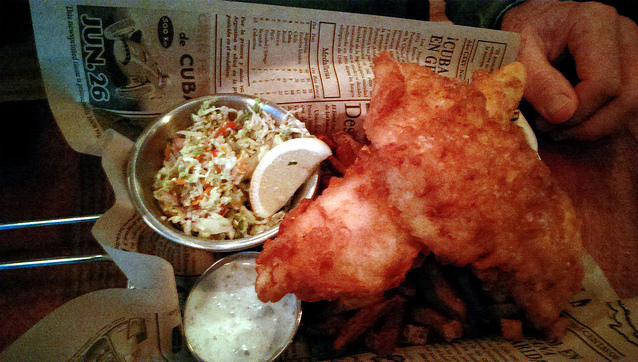 A staple for many fish-lovers, Dianne’s offers beer battered fish and chips, which comes with homemade tartar sauce, fries and slaw.  Similar to the Pilot House, they offer customers a choice of fish, which includes: Alaskan Pacific Cod ($16), Line Caught BC Halibut ($21), Jumbo Shrimp ($18), Panko crusted Alaskan ‘Weathervane’ scallops ($17), and combo cod and shrimp ($18).  As you can see, they’ve again reinforced the Baja aspect by serving their fish and chips, as well as their fish tacos, on Mexican newsprint.  These little details go a long way.  As for the dish, the light, crispy batter really lets the flavour of the fish shine through without being too filling.  Creamy, homemade tartar sauce complimented the fish well, but it would be cool to see Dianne’s play with other flavours by offering different varieties such as as chipoltle and cumin.  Sadly, on this occasion, the fries were rather disappointing, perhaps overcooked or left sitting for too long. 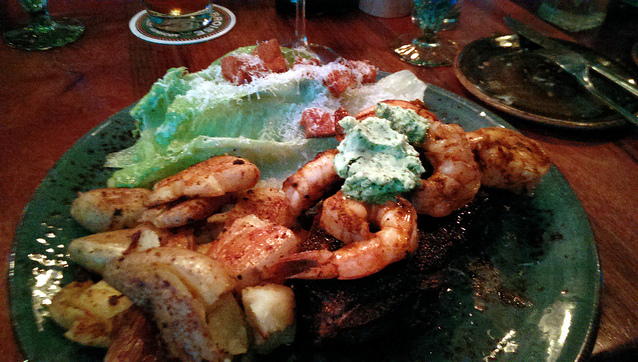 Next up was the surf and turf, which consists of a grilled 10oz chile spiced black angus strip steak, served with either blackened jumbo shrimp, cilantro pesto butter ($35), or spicy roasted 1/2 Nova Soctian lobster, jalapeno-lime butter ($39).  All entrees are served with your choice of two of the following: house vegetables, mixed greens, fries, smashed potatoes or kimchi fried rice.  There’s really a lot going on on the plate, and make no mistake the portion is again rather substantial.  The chile spice adds an interesting glazed element to the steak, which plays nicely with the mildly seasoned shrimp.  The pesto butter was to die for, but I found it somewhat out of place, or maybe too much considering everything else on my plate.  Other types of seafood entrees include: blackened BC rainbow trout ($23), pan-seared wild Alaskan sockeye salmon ($28), and of course the Nova Scotian Lobster Roll. 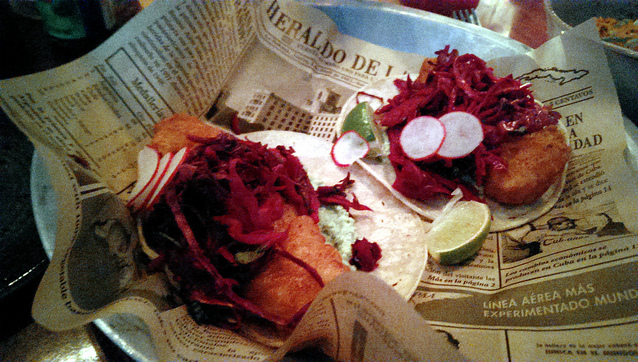 Finally, we get to Dianne’s tacos.  Save for Mike Mundell’s and Mission Street North’s offerings, fish tacos are remarkably difficult to come across in Kingston, let alone get right.  Dianne’s offers 4 different varieties: baja fish (beer battered Alaskan Pacific cod, pickeled red cabbage, radish, avocado crema), pollo (chicken), al pastor (pork) and roasted cauliflower, all served on authentic hand-made Mexican style corn tortillas.  Pricing gets better the more your order: two ($8), three ($11) and six ($19).  As illustrated in the photo above, the portions are rather significant even if you opt for a pair of tacos.  I think this is where Dianne’s will really win people over.  The fact that you can go there and get a remarkable meal such as this for less than $10 is amazing.  The tacos are rather simple, and not bogged down with too many competing or complex flavours.  For added zip, Dianne’s encourages diners to experiment with lime and a selection of hot sauces to strike the right balance of tart and heat.  Looking forward, I would love to see them add some homemade pico de gallo or a fruity relish to the condiment selection.  This is one of those dishes that will keep you coming back for more.

Dianne’s Fishbar Restaurant is a truly delicate treasure, especially considering the history of past restaurants in this location and the fact that many people might not be head over heels about fish.  Regardless, I think that Dianne’s will succeed as a result of their diverse and playful menu that ranges from simple to more upscale dishes.  The atmosphere also plays to this by being simple and sophisticated.  While service tended to be a bit slow on our first visit, such concerns instantly melt away after the first bites were being enjoyed.  Dianne’s has steadily earned a well-deserved following and reputation, which will hopefully continue to flourish as the restaurant sails into new and exciting waters.