I`m not going to lie, when I heard whisperings that Matt Day (son of AquaTerra restaurateur, Clark Day) was opening a new restaurant in Kingston’s West End, I was worried. Sure, my curiosity was peaked: I read the newspaper stories, joined the restaurant’s Facebook group and read the initial reviews, but still, I avoided going. Why? Because I felt like a traitor. I’m an AquaTerra girl— I know the menu by heart, dream of their amuse-bouche, and go so often that many of the staff know me by name. There is no doubt that AquaTerra has been my go-to place for an excellent meal for the last few years and I knew that if Days on Front (DoF) lived up to the hype it was going to be a worthy competitor for my appetite and affection. I’d be torn. However, after hearing dozens of excellent reviews from friends and co-workers, I finally bit the bullet and made a reservation for last Saturday evening.

The name, Days on Front, is no doubt witty. It is a play on both the owner’s name and the location of the restaurant, which is found in the Reddendale plaza at the intersection of Days Rd. and Front Rd. The former location of Paulina’s Curry, the space has been completely re-imagined: its outside boasts a new stone façade and the inside palate is smart and sleek, but welcoming. When we arrived, both the bar and dining areas were absolutely packed, which is why reservations are a must in order to avoid disappointment.

Former head chef at AquaTerra and now chef and co-owner of DoF, Jason Legere has styled a menu of simple, but sophisticated “contemporary Canadian cuisine.” It includes a selection of salads, not-so-subtly labelled “Fried Items,” “Small” and “Large” plates, as well as a daily special. Where possible, items are locally-sourced from Kingston and area’s favourite growers and suppliers. The menu also boasts an affordable “40 under $40” wine list sourced from a variety of countries, with many selections available by the glass.

Despite it being a busy dinner service, we were seated immediately and informed of the daily special, Coho Salmon. After we finished deliberating and ordered, our server delivered bakery-fresh buns that were soft and chewy and served with real whipped butter. 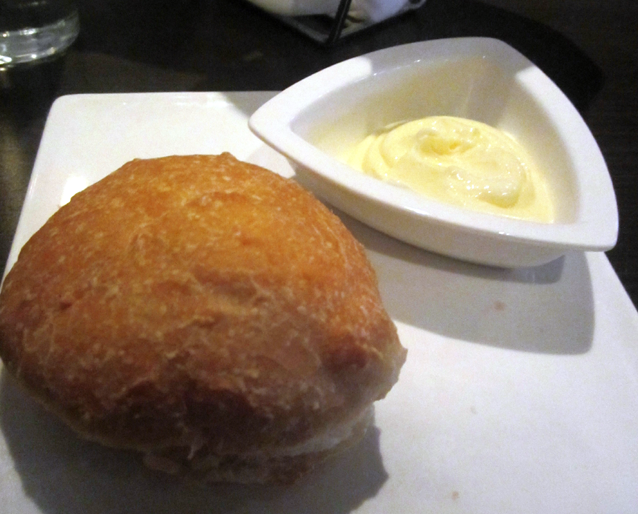 My first course was the scallop “Small Plate”— seared scallops with leek and brown butter puree, bacon jam, and pine nuts for $10. This dish smelt divine and the plating was beautiful. The scallops were expertly cooked: slightly-charred outside with a soft, but solid, inside. The bacon jam, a type of candied bacon, complimented the fresh seafood and the leek puree added a savoury note. There were a lot of individuals flavours going on in this appetizer, but when combined they were in harmony.

For his appetizer, Curtis ordered the Mac and Cheese — pork belly, orzo and four-year old gouda for $7, which again earned brownie points for plating. In this grown-up version of the old classic, the use of a mild cheese like gouda really made the pork belly the star of this tasty dish. While it was topped with bread crumbs, I would have liked to see some shredded cheese on the top – browned and bubbly.

Next up was the Chicken Supreme— chicken with cremini mushrooms, seared gnocchi, green beans and thyme pan jus for $20. The chicken was juicy and tender, the blanched green beans were bright and crisp, and the mushrooms meaty. I liked the innovative use of gnocchi (potato dumpling) as a substitute for the usual roasted or mashed potatoes. This dish was substantial and delicious. My favourite part was that there was not a lot of seasoning or spices added; because it makes use of fresh, quality ingredients, it really was not necessary and the natural flavours really shined through. 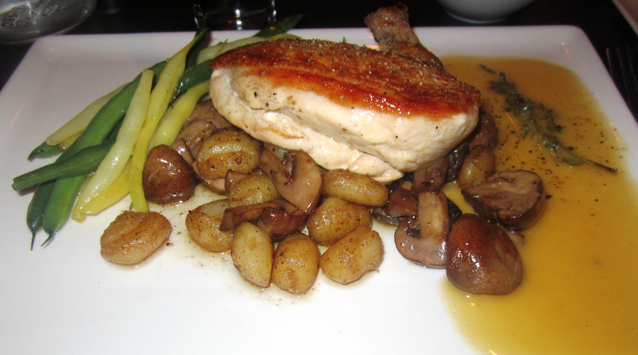 Our second main was the Red Wine Braised Beef Short Ribs for $21. This meaty dish is a carnivores dream with a very generous portion (there were four bones; it was substantial) of fall-off-the-bone, melt-in-your-mouth short ribs. What is DoF’s secret to success with this dish? They slow-cook the ribs for six hours. It was paired with scrumptious garlic mashed potatoes and green beans, and smothered with borderlaise, a dry red wine based sauce, which added density to the dish, but was not heavy like a gravy. 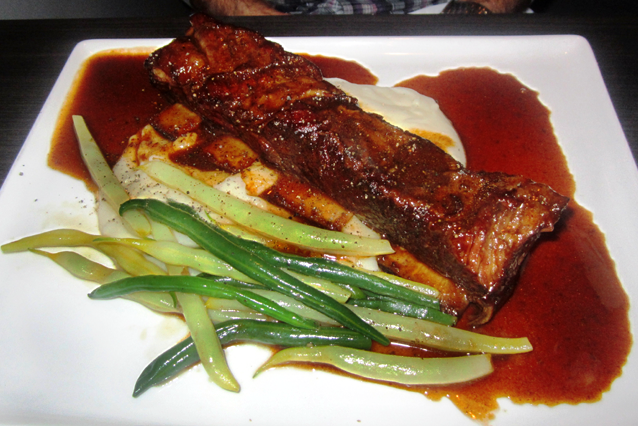 For dessert we shared the Quadruple Chocolate Cheesecake— a milk and white chocolate variety, with dark chocolate ganache, chocolate crumb, and raspberry coulis for $8. This dessert was decadent, being rich, creamy, and cheesy. The exterior ganache broke away to reveal a soft, fluffy middle, which made it less-heavy than a traditional cheesecake. Married with the raspberry coulis, it was the perfect balance of sweet and tart. 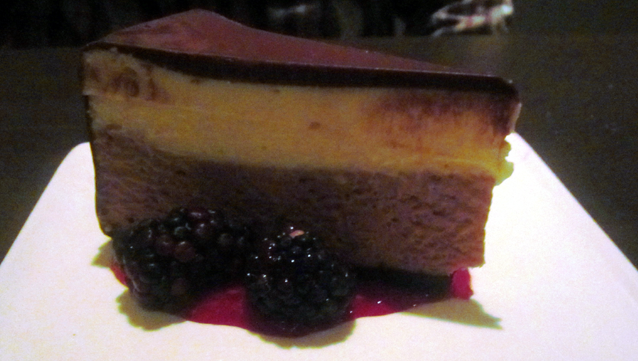 The role of a food critic is to expose the good, the bad, and the ugly of the restaurant experience. While, in a perfect world, they would add a few more hot vegetarian items and perhaps a prix fixe menu, I am finding myself unable to say anything negative about my experience at DoF. The atmosphere was classy, the service was great, the food was delicious and I found the prices to be reasonable, considering the quality and portions of the dishes.

Days on Front is much more than a witty name. I now find myself caught between two men and their fine-dining establishments. I’m sorry, Clark, I’m may just have to have a food affair with Matt, too. After all, I am epicurious!