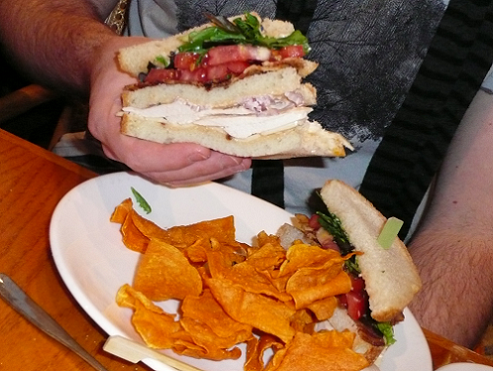 It’s been far too long since we embarked on a culinary adventure in the name of Kingstonist. During our previous gastronomical gambados, we’ve tested the tempting plates of Spaghetti is Ready, Olivea, and many others, while we’ve also ventured into establishments that have stood the test of time, including: Morrison’s Restaurant, and Luke’s. Today’s taste sensation falls into the latter category, but it should be noted from the outset that it is truly at the head of the pack. Ask any resident or visitor to the Limestone city for a restaurant recommendation, and you’re guaranteed to consistently find Chez Piggy at the top of the list.

“Nearly 30 years ago, Rose Richardson and Zal Yanovsky renovated an abandoned limestone stable and launched a dining experience that blends grace and gusto, taste and imagination – and helped make Kingston a destination for food lovers.” Nestled along the winding pathway in Rocheleau Court, Chez Piggy is hidden away from the hustle and bustle of Princess St. Many people walk by it every day without ever realizing that they’ve just passed by the dining destination that put Kingston on the forks of foodies from near and afar. In my opinion, there’s something special about places that are a bit harder to find.

As soon as you enter, you are whisked away to a cottage-like atmosphere, which is extremely cozy thanks to the warmth of the wood stove, and friendly hostess. Right away it’s easy to see why so many people keep coming back to Chez Piggy. But that said, the service and atmosphere are really only a small part of the dining experience at the Pig, while the real test is trying to choose from their menu. Although there might be a myriad of offerings you’ve never heard of, including: bocadillo and gambas, I promise that Chez Piggy’s gourmet fare is anything but pretentious.

For lunch this past Saturday, we started by sharing a tasty dish of gambas al ajillo – a pan of shrimp, cooked in oil, garlic and other spices. The basket of fresh bread from their sister shoppe, Pan Chancho, made an excellent accompaniment as it helped soak up the flavored oil from the skillet. I then moved onto the Chez Piggy Club, which is served on Pan Chancho’s bread, with homemade sweet potato chips (pictured above), while my dining companion settled down with a bowl of fusilli alla puttanesca. As you can tell by our mouth-watering photos, the food is delicious, and although it might be a bit more expensive than other restaurants, it’s money well spent. There really is no other way to describe Chez Piggy than divine, and simply the best that Kingston has to offer. If you can’t relate, then it’s time you made a reservation.