When we canvassed our readers to seek out the best local Indian restaurant, they were quick to point out that we neglected to include a few of their favorite local mainstays including Rahim’s Cuisine and Cafe India.  In a past life I lived next door to one of this city’s best Indian restaurants, while that proximity bred an addiction to madras as well as an insatiable desire to sample more Indian cuisine.  In the Limestone City, I’ve made a concerted effort to check all of the Indian restos off of my list, while my latest fix was provided by Cafe India.

Cafe India is a long-standing family-run establishment, situated in an unassuming storefront just down from Princess and Clergy, right next door to the impossible to miss new kid on the block.  The interior of Cafe India is just as modest as the outside, with dated traditional art, plain tables and chairs, and other elements that could benefit from a freshening up.  That’s all to say that Cafe India isn’t much to look at, but we’ve all likely experienced a fantastic meal at a place that wasn’t big on frills.  When we entered the establishment we were presented with a notice that Cafe India is in the process of renewing their expired liquor license, as well as a youth sitting at a table playing on a laptop.  Not the welcome we were hoping for, but we pressed on to sample what we really came  for.

Before being presented with menus, our waiter brought us a single serving of papadum (pictured above/right), which is a deep fried, crispy wafer made from ground lentils.  He explained that this treat was complimentary, as it is in most other Indian restaurants, and apologized for their inability serve us alcohol.  After inquiring about specials and what our server would recommend, we settled on a spicy main course feast, as well as a variety of familiar appetizers to warm us up.  One of the highlights of the meal was Cafe India’s garlic naan ($3.50) (pictured above/left), which is a popular Indian bread that’s cooked in the tandoori oven.  The naan struck a perfect harmony between the burned crusty bits and the soft chewy portions, while the garlic added a nice punch of flavour.  If your naan arrives before your main course, be sure to save enough to soak up your sauces. 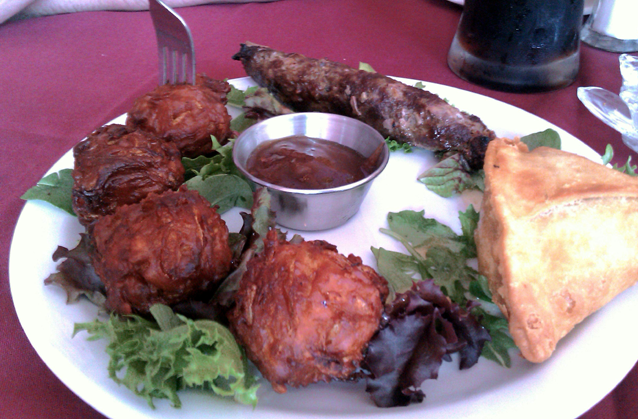 Normally I would opt for vegetable pakura as my app, however Cafe India doesn’t have it on their menu.  Instead, we decided to sample onion bhaji, seekh kabab and vegetable samosa via the mixed platter ($4.95).  I had some reservations when I first saw the seekh kabab, as it reminded me of the koobideh I didn’t much care for at Kingston Iranian Food (KIF).  Thankfully the spices used to season this skewer of ground beef were much different, and although juicy it was far less greasy than what KIF had to offer.  Conversely, while the onion bhaji’s golden appearance made us drool, the inside was far less cooked, almost to the point of being raw at the centre.  I’m not sure if this was under cooked, or simply how they prepare their bhaji, but it’s obviously something to keep in mind when you’re placing your order. 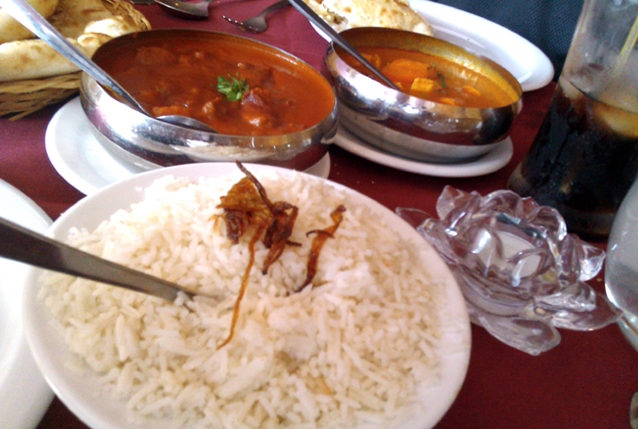 As I alluded to above, we opted for some truly spicy dishes for our main course.  The beef vindaloo ($11.95) is listed on the menu as an extremely hot dish, cooked with fresh lemon juice, yogourt, extra red chilies and potatoes.  It lived up the promise of ample heat, however I found it to be a bit overpowering to the point that it was difficult to enjoy.  As well, the portion of beef was less than what I expected for the price, and a bit heavy on the sauce.  Next up was the chicken madras ($10.95), cooked with red chilies, fresh lemon juice, yogourt and spices. This dish is slightly less hot than vindaloo, and I found it to be a real treat.  The portion was slightly better than the beef, but again heavy on the sauce.  Good thing we had lots of palao rice ($2.95) and naan to soak up all the spicy goodness.

When it was all said and done, our bill came to under $40 excluding tip, which is a pretty standard price in relation to the other Indian restaurants in Kingston.  Cafe India has a great location, but I feel as though some minor improvements, both in the kitchen and in the dining room, are necessary in order for this resto to establish itself ahead of the competition.

One thought on “Cafe India”