Where Chocolate Flows and Brunch is Bounteous

There are people out there who don’t care for chocolate. I know this not from hearsay but because I once ranked among them. Only about seven short years ago, well into my adult life, did I begin to exhibit anything more than a tolerance for what some regard as the sugary equivalent of caviar. It was then that I read a novel whose author described certain qualities of the choicest Swiss chocolate in language so seductive that it impelled me out of my rather comfortable reading chair and off to a chocolatier’s shop not far from where I lived at the time. While I’ve by no means become a connoisseur, I have since that fateful day been known, of an evening, to nibble on small squares of that dense and magical melding of fermented cocoa, sugar, and fat that so many so adore.

Yet I must confess to a certain snobbishness, a restraint, in the matter of chocolate. When it starts to ooze, or when its admirers speak of it in oozing phrases, I begin to feel slightly sick to my stomach, despite my decidedly sweet tooth. When, for instance, I come face to face with someone wearing a T-shirt that announces, “I don’t drown my sorrows / I suffocate them with chocolate,” my own sorrows rise to the surface, or something like that, and I need to be excused. 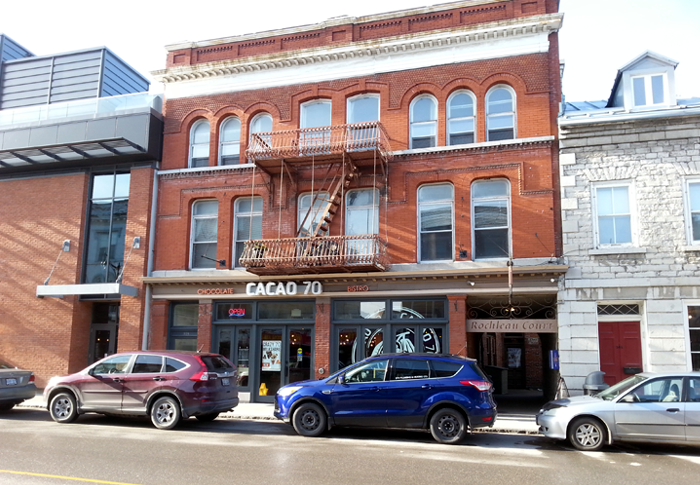 And so I admit that I struggled the first time I crossed the threshold of CACAO 70, a new chocolate house (I’m not sure what else to call it) downtown. When, upon picking up the menu, I was confronted with slogans like “A balanced diet is a chocolate in each hand” and “Put ‘eat chocolate’ at the top of your list of things to do today / That way, at least you’ll get one thing done,” I was overwhelmed to the point that I turned tail and beat a nauseated retreat.

But after steeling my resolve for a month and doing mental exercises aimed at dissociating the language signals sent to the frontal lobe of my brain from those of taste, bound for the parietal lobe (which is even harder than it sounds), as a way of getting past the initial shock of perusing the menu, I returned last week. It was cold now too, so the prospect of hot and chocolatey things had increased in appeal.

Such orgiastic saccharinity is not all there is, of course, but it is the menu’s unmistakable leitmotif. There is also an assortment of coffees and teas—even a chocolate beer. Hot cocoa options span the gamut from the watery but beloved North American variety to the bituminous opulence of Italian cioccolata calda. There’s even a list of fifteen exotic chocolate qualities to choose from, complete with flavour profiles and comparative cacao percentages. For the ascetically inclined, dragged here against their wishes by gluttonous friends, there are fruit smoothies.

Before I go too far myself, I do need to stop and mention that brunch is the other mainstay of CACAO 70’s mission of pleasure, and here I admit that the Italian sausage frittata, the country-style ham crêpe, and the “Lazy Breakfast”—a full English breakfast with a side of fresh fruit and, you guessed it, melted chocolate—would all have struck my fancy had I come at an earlier hour. The “Illegal Chocolate Waffle,” however, left me with a sudden compulsion to seek out every opportunity to abide by the law. Finally, there were several savoury crêpes and salads that looked as though they might afford passage to the outside without hyperglycemic paroxysms accompanied by pangs of guilt and self-loathing.

But I had come here for the full experience and wasn’t about to cop out now with a grilled vegetarian sandwich and a frail cup of chamomile. I ordered the black and white chocolate fondue in much the same impetuous spirit of one diving from a high cliff—not thinking about it for fear of chickening out—and, the better to keep the aforementioned brain lobes incommunicado, turned my attention, for the first time, to my surroundings. The space was in a rustic-industrial style dominated by shades of black accented in warm ligneous tones, with creaky wooden floors, walls papered in photographs of cocoa processing, and above the kitchen a dropped ceiling made from reclaimed lumber. Everyone else seemed to be in pairs, and it occurred to me now that most of the items on the menu really were better suited to sharing. Christmas music played, and at a table behind me two women were engaged in an apparently serious conversation concerning certain ontological difficulties that had been raised by their children’s questions about Saint Nicholas.

Then it came, the pot of molten chocolate set alongside an array of fruit, waffle squares, and sugar-speckled brownies. I felt the blood accelerate in my veins, did a quick search with my smartphone to ascertain whether there was such a thing as sudden-onset diabetes, and, content enough that there was not, at long last heroically speared a waffle niblet, drowned it in luscious chocolatey goo, raised it to the level of my reflexively salivating mouth, and plunged it in… 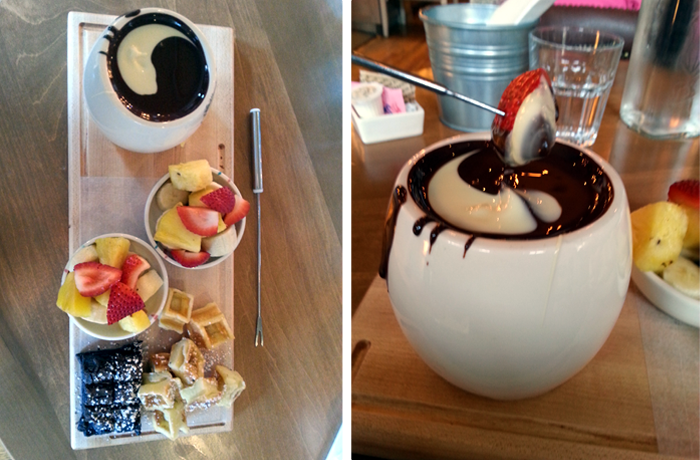 To find out how this story ends, I’m afraid you’ll have to make your own trip over to CACAO 70, one of Kingston’s newest additions, situated at 340 King Street East. They’re open from 10 a.m. until 11p.m. Sunday to Thursday, and until midnight on weekends. Brunch is served every day from 10 until 4, while sweetness gushes all day long from a bottomless well. If you have a T-shirt, or any other article of clothing, that proclaims, “If I must die, let it be death by chocolate!” this will be your Shangri-La.