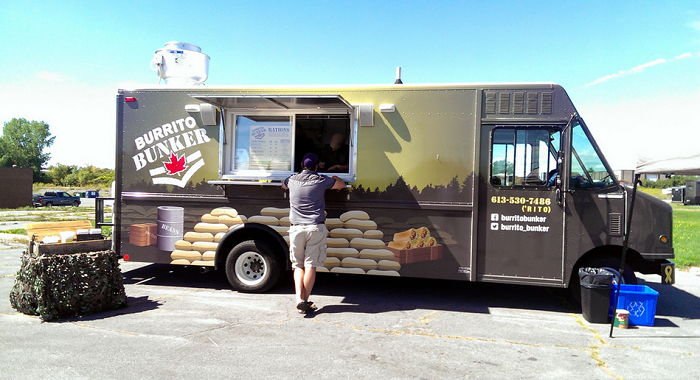 It’s fascinating to watch the cycles that the food industry goes through in Kingston (or anywhere for that matter).  A few years ago we saw an influx of gourmet burgers with the simultaneous opening of Harper’s, The Works and Five Guys.  Poutine also made its mark in the downtown core with Smoke’s Poutinerie, The (now defunct) Poutine Place, and many of the aforementioned burger joints throwing their curds and gravy into the ring.  This past year has been all about Mexican food.  Particularly fish tacos, but burritos have also been making a splash in YGK.

I recently visited Burrito Bunker, a food truck located on Gardiners Road in a lot across from The RioCan. (Food trucks! Another trend that is taking Kingston by storm!)  The truck itself is hard to miss, decked out with an army theme that doesn’t take itself too seriously – the sandbags painted on the side are piled next to a crate full of burritos and over to the left is an oil tank that reads “beans” and another crate marked “hot peppers”.  The logo on their Facebook page has the same burritos being dropped from an airplane wearing little parachutes.  The menu (or the list of “Rations”) is short and sweet and each offering is aptly named for a rank in the army.  Whimsy aside, these people mean business when it comes to making burritos. 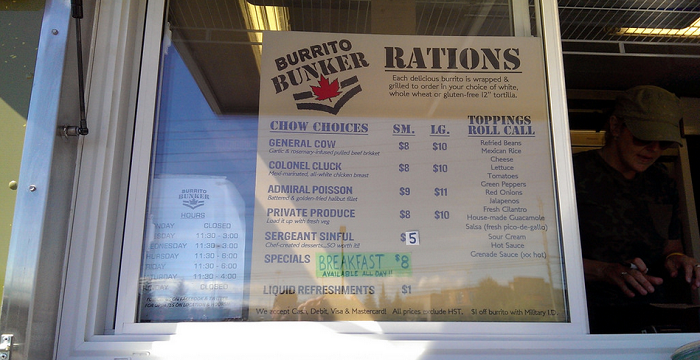 We were greeted by the friendliest folks you could imagine upon arrival, who were happy to answer questions but also told us to take our time figuring out what we wanted – despite the steady traffic that was streaming in and out while we were there.  We quickly made our decisions though.  I ordered a small Admiral Poisson – a battered and golden-fried halibut fillet ($9), and my dining companion placed an order for a large Colonel Cluck – a mexi-marinated, all-white chicken breast ($10).  We then chose our toppings (all made fresh that day, and I got ’em all) and took a seat under the nearby tent.

The smells wafting from the truck as we waited were intoxicating and we were impressed with the constant stream of people who came through while we were there.  From our eavesdropping, we deduced that the customers we saw that day were a pretty even mix of regulars and people who had never been before.  After about a 10 minute wait, our burritos were ready.  Since there is no dining area (it is a food truck in a parking lot, after all), we took our treats home. 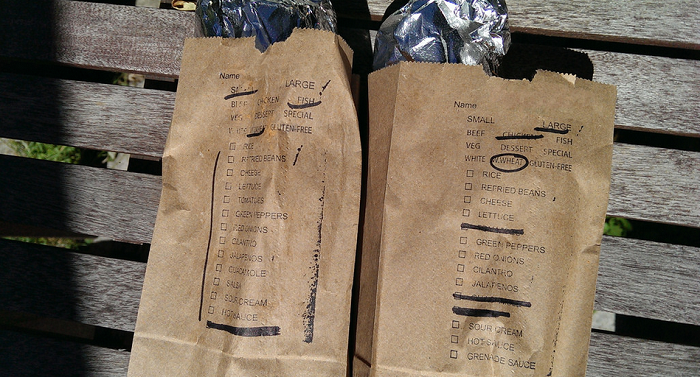 The burritos, which were grilled and still warm when we took our first bites, are different than others we’ve had in that they are long rather than the bulbous burritos we’ve had elsewhere.  This, combined with being grilled, seems to help keep them from falling apart after a few bites.  The grilling also adds a nice flavour and crunch. 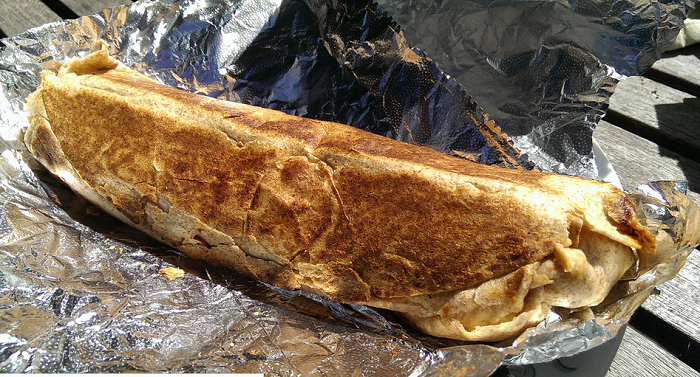 The first thing I noticed about my burrito was the use of refried beans over whole beans.  I love whole beans but there’s something nice about the gooey mix with the cheese that refried beans offer.  On my second bite I got the fish and it was, by far, the best part of the burrito.  The flavour was nice and light and the batter still had a good crunch to it.  The only thing I would have added to the mix was a bit of lime and maybe some cabbage or pickled radish.  I find that, while fish tacos and burritos have a delicious, light flavour, it’s nice to pump that up just a bit with some acidity.  Also, I should add that I didn’t actually get *everything* on mine.  I got the hot sauce but stopped short at the “Grenade Sauce”.  Knowing what I know now, and being a spice lover, I realize the hot sauce isn’t as hot as I could handle so I would definitely go all the way next time.  My dining partner also felt he could use more heat despite getting the Grenade Sauce.  But then, we grow a million hot peppers in the summer and eat them on a daily basis, so you should probably see for yourself.  The chicken was flavourful and moist and the large size of the burrito was filling without being ridiculous.  We definitely felt we got our money’s worth on both the small and large sizes.

All in all, Burrito Bunker was a fun experience.  The best part is definitely the people who work there.  Their enthusiasm and friendly nature rubs off on everyone who comes by.  Is it the best burrito in town?  Well, that remains to be seen.  For me, it’s definitely the place to go for a fried fish burrito, hands down.  It’s also a quick and easy stop along Gardiners Road for those who would like local bite while in the west end.  Be sure to bring some extra change along too.  There is a generously filled jar on the windowsill collecting money for military families, a gesture that really hits home in YGK.

Go see for yourselves and do it soon!  Food truck season is fleeting, but I’m sure they’ll be back next year.  You can visit them Tuesday and Wednesday, 11:30am-3pm; Thursday and Friday, 11:30am-6pm and Saturdays, 11:30am-4pm.  Their exact location is 687 Gardiners Road and they accept cash, debit, visa and mastercard (a rarity for a food truck!)  There is also a $1 discount with Military ID.