Skip to content
June 29, 2012September 21, 2015 Danielle Lennon
Burrito Amigo is permanently closed. Looking for a place that’s still open? Check out our restaurant reviews and recommendations for establishments that are still open and serving great food in Kingston.

When I saw the first sign announcing the opening of Burrito Amigo at 337 Princess St. about six months ago, I was so excited.  Not only because I love Mexican food, but because after a night out on the town, I want a snack that isn’t a burger or poutine.  I try my best to eat healthily and as I get older, stuffing myself with a Big Mac at 1am is getting to be a less and less appealing option.  I knew that a new burrito joint would offer up a healthy, and yet delicious alternative.

Harvey and I, along with a friend, hit up Burrito Amigo for the first time last night.  The moment we arrived the staff was greeting us and offering up advice on how to order.  The menu board (pictured above left), presents five choices for making your perfect burrito.  You pick one thing from choices one (rice), two (beans) and three (meat) and then as many items as you’d like from four (toppings) and five (sauces), guacamole being the only one that costs extra ($1.50).  The menu also boasts the fact that everything is made fresh daily. 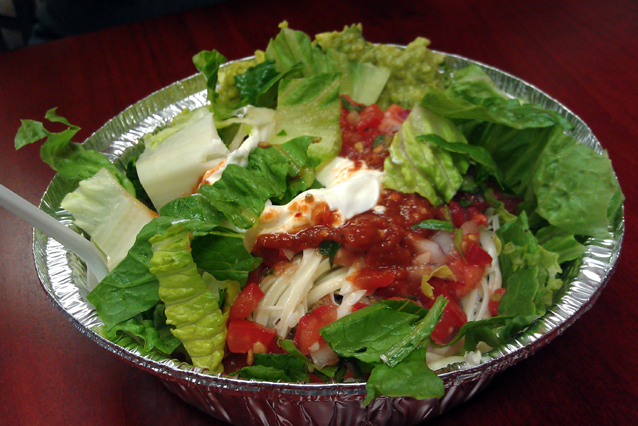 I’ve been doing the no carb thing for just over a month now, so I opted for the burrito bowl ($7.50), which comes with everything a burrito would, minus the wrap.  I chose cilantro-lime rice (yes, I gave in on the rice.  It just sounded so good!), pinto beans and brisket, topped with sour cream, cheese, guac and both hot salsa and the fresh mild salsa.  It’s unfortunate that you can’t see the beef in this picture.  It was tender and stringy and melted in my mouth.  The guac was awesome too – the serving was generous and the garlic flavour was just right.  It was also very fresh as were all the ingredients.  I really felt confident that I was eating healthily but I was also fully satisfied – stuffed really – by the time I’d finished (yep, I finished it…). 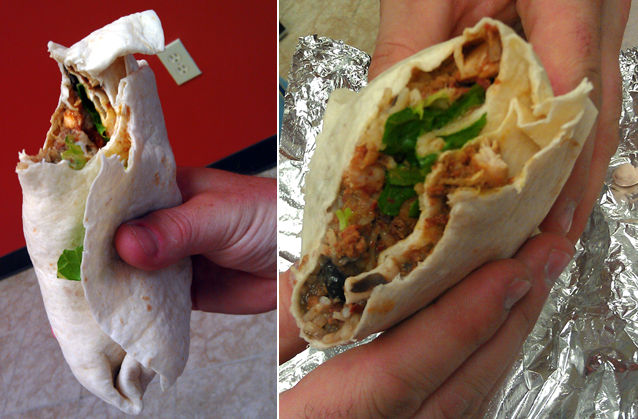 The boys both opted for traditional wrapped burritos ($7.50) stuffed with chicken, black beans fried in bacon fat (yum!) and the mexi-rice option, which is a rice seasoned with various Mexican spices, as well as cheese, sour cream and salsa.  I had a taste of Harvey’s burrito and it was delicious.  He had the white chicken, which is chicken breasts marinated in a rosemary chipotle sauce.  Our friend opted for the dark chicken which is doused in a mustard-thyme marinade and is listed as a house specialty.  Pulled pork marinated in sweet and savoury chipotle tomato mix is also an option, as is no meat at all, in which case you get your guac for free as well as extra lettuce.

Not only were these burritos delicious, satisfying and quickly prepared by a knowledgeable staff, but I have to add that they were expertly wrapped.  Properly wrapping a burrito is a tricky thing to do, but not one drop of sauce was spilled as they were eaten.  With the three items, a bottle of water and extra guac for me, our total was just under $30.  Not bad for three people who left completely satisfied.

Sadly, my dreams of a late night burrito are not quite fulfilled – yet.  Being a newly opened establishment, the owners and operators are still getting a feel for how business will do.  I Tweeted them asking if they plan to be open at night and they said they hope to, but just that day they had so much business they had run out of wraps.  So, I say good for them!  I hope business continues to be great and that eventually they can keep their doors open a bit later – even if it’s just on the weekends.  I know this place will be a hit with the students as just after we sat down to eat, a whole slew of them arrived for their burrito fix.

All in all, this was a great experience.  Whether it’s for a late night snack or a lunch or dinner, I will definitely be back.  I felt satisfied that my healthy eating had not been sullied with a visit to Burrito Amigo and it’s so nice to know that a healthy and affordable option is right there on Princess Street.  (And locally owned to boot!)  Go see for yourselves and have a great long weekend!