I’m noticing a trend here: Kingston loves Mexican food. Darn right! Three of our Best of 2015 posts are centered around some of the great Mexican cuisine that has graced our downtown over the past couple of years. Today we look back at a poll that asked Kingstonist readers to weigh in on a rather contentious subject: Who make the best burrito in town?  While the list of contenders is full of spectacular options, one burrito clearly stood above the rest. 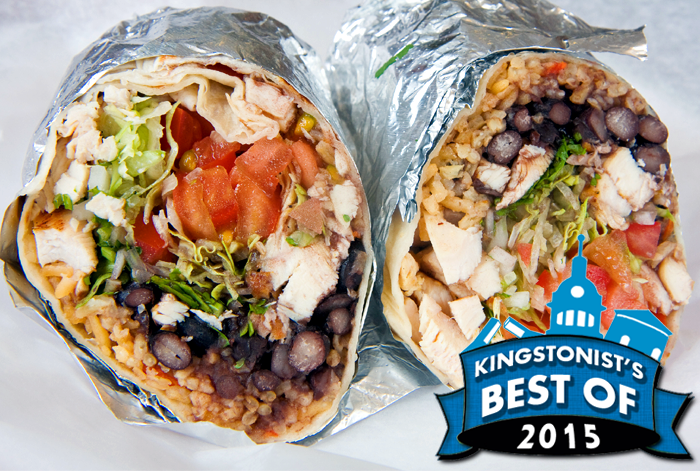 Kingston may be thousands of kilometers north of the Mexican border, but thankfully, we don’t have to travel that far for Mexico’s mouthwatering cuisine. Although our options in the limestone city tend to be limited to a handful of independent and franchised establishments, those who are serving up authentic Mexican, TexMex and Baja-inspired dishes tend to satisfy our cravings when they strike. Mexican cuisine is vast and varied, ranging from saucy enchiladas to frijoles refritos and sugary churros, while these staples are becoming increasingly easier to find locally thanks to new establishments such as Mexico Lindo y Que Rico and La Hacienda. Admittedly though, when we seek out dishes from way south of the border, many of us hunger for more traditional fare such as tasty tacos and bursting burritos.

Last Summer we embarked on a passionate search for the best fish tacos this city has to offer, which ended in a photo finish between two dissimilar establishments: Mission Street North and Dianne’s Fish Bar. With that debate still raging on amongst local foodies, we decided that it was high time we sought out the best burrito in Kingston. Similar to our search for amazing fish tacos, the roster of kitchens rolling delicious burritos may not be huge, but there’s certainly no shortage of options to make your dining decision a tough one. Drawing on your past dining experience and preference concerning what makes the perfect burrito, this week’s poll asks:

Who makes the best burritos in Kingston?

The above list is as extensive as we can get without taking a real dive into the realm of fast food – sorry Taco Bell fans. As you can see, it includes a pair of seasonal food trucks specializing in Mexican inspired cuisine, a relatively new locally owned start-up, and a handful of small to large-scale corporate sit-down offerings. While there’s likely more than a few fans of those franchised establishments (I admit, I have enjoyed Quesada on more than one occasion), the locally owned spots deserve tremendous consideration when it comes to claiming the title of “best burrito in Kingston”. For me, Mission Street is a consistent standout, which is partially owing to the fact that they conveniently keep showing up wherever I am (ie The Brooklyn’s patio, MacKinnon Brothers Beer & Music Festival etc…). If only there was a way for them to operate year-round.

What makes for the best burrito in Kingston? Is it all about the perfectly seasoned pork, chicken and beef. What about that extra level of heat that gets you working up a nice little sweat? Is your ideal burrito served on a plate with an ice cold cerveza on the side, or do you prefer your tortilla baby wrapped in foil for easy consumption on the go?