One of the big discussions of the year has been, and continues to be about whether or not we should privatize the sale of alcohol in Ontario.  This would allow corner stores and grocery stores to take on the job, much like in Quebec and British Columbia.  Those for privatization emphasize the convenience factor, where those opposed are concerned that more regular access to alcohol will add to social problems.  The LCBO recently announced a projected profit of $1.2 billion going back to the Ontario government for 2011-2012, perhaps making the idea of privatization a little less enticing.  What do you think?
—————————— 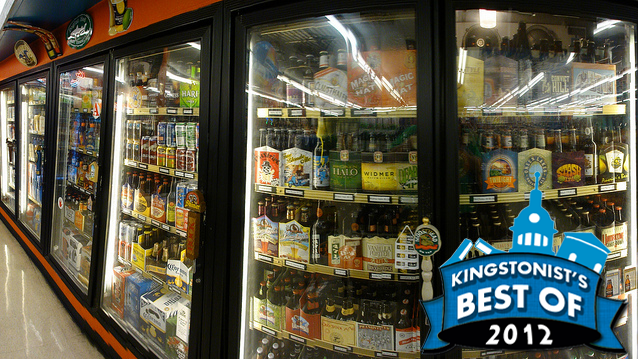 OCSA Wants To “Free Our Beer”, But Do We?

Yesterday, the Ontario Convenience Stores Association (OCSA) brought a petition to Queen’s Park containing more than 112,000 signatures asking the government to “free our beer” and allow the sale of alcohol at local convenience stores. At first glance, it might sound like a good idea, and would allow for more convenient purchases.

The OSCA has quickly and repeatedly shared data that claims that the majority of Ontarians support this change. In contrast, last September, the Centre for Addiction and Mental Health (CAMH) published a report called Ontarians’ Opinions about Alcohol Policy. The report showed that a strong majority (73%; 95% CI: 69%-76%) of Ontarians do not want alcohol to be available in corner stores. This anonymous, random-digit-dialing telephone survey provides an unbiased view of the Ontario landscape, far different from the biased petition being presented by the OCSA, which only focuses on those who are in favour of this change. Also, in contrast, a recent random telephone survey of Kingston residents actually found that 68% of respondents either disagreed or strongly disagreed with selling alcohol in corner stores. Furthermore, 95% and 93% of residents stated that beer store hours and liquor store hours should either stay the same or be decreased. These data provide clear indication that the majority of Kingston residents are satisfied with the access that they currently have for purchasing alcohol.

The OCSA has also shared data that claims that convenience store operators are the best at checking ID of potential underage purchasers and therefore do not present any increased risk of harm to the youth in our community. A recent KFL&A Public Health enforcement check found that 12% of stores were found to have sold tobacco to shoppers under the age of 19. As alcohol is the number one drug chosen by youth and is used by 54.9% of grade 7 to 12 students according to CAMH’s 2011 Ontario Student Drug Use and Health Survey, this 12% failure is cause for concern as the risk for harm due to alcohol use by youth is already high. In addition to the issue of sales to people who are underage, the issue of exposure of youth to alcohol products is a concern. A question to ask ourselves is: do we really want our children and youth to be exposed continually to alcohol products and marketing in convenience stores when they go to purchase items such as bread, milk or candy? This exposure and branding will increase the normalization of the product at a very impressionable age.

Currently, Kingston has four LCBOs, four Beer Stores, and eight wine retail locations – 14 outlets in all. If all 75 convenience stores in Kingston become licensed to sell alcohol, it will represent more than a fivefold increase in alcohol retail locations in Kingston. According to MADD Canada, Ontario has about 1,000 LCBO and Beer Store retail locations. The estimated ratio of convenience stores to LCBO and Beer Store locations is 7 to 1, which would translate to an additional 7000 community locations where wine and beer may be accessed. Increased access is known to lead to increased consumption which leads to increased harms to the drinker, and potential harms to innocent bystanders, and the community.

Ultimately, the issue comes down to two arguments; the economic outcomes and health outcomes of our community. Economically the case is made that selling alcohol in corner stores will open up competition, provide cheaper prices and more choices for the consumer. When considering this point, it is important to note that even in our current alcohol retail market controlled by the provincial government, there is already an economic loss from the sale of alcohol. The Canadian Centre on Substance Abuse has calculated that the direct revenues from the sale of alcohol in Ontario are almost $500 million less than the direct costs associated with the sale of alcohol, including enforcement and health care costs. The potential health outcomes for our population can be immediate, such as injuries and deaths due to impaired driving, drowning, falls, fires, suicide, homicide, sexual assault and other violence. Moreover, the health outcomes can be long-term and include certain cancers, high blood pressure, mental health problems, liver disease, and stroke. According to the World Health Organization, alcohol is the second most harmful risk factor for disease and disability in developed countries including Canada. It is associated with increased health and social costs. In times of increasing health care costs, these facts should not be ignored. The OCSA is concerned with creating opportunities for their members and this is commendable; we rely on the growth and development of our private sector for the overall wellbeing of our communities. However, this very important decision with potential short and long term impacts must be considered carefully and not simply based on convenience.

For now, the provincial government is reporting that they will not change the current retail system for alcohol. This is good news. It is important however, for all communities to be well informed to make good decisions. Unfortunately the information the OCSA campaign is providing to the public and government officials is incomplete and could lead the province to take future action that will cause more harm than good. The decision may be as simple as the OCSA would like us to believe, if alcohol were a regular product. However, alcohol is not a regular product, given the significant short and long term harms related to its use. It is the government’s responsibility to control for these harms while aiming to minimize the impact these controls have on our freedom.

Alcohol is undeniably a part of our social and economic fabric. Communities are encouraged to work together to consider what factors are creating an environment that allows alcohol to be used in ways that are harmful. On November 5, 2012, KFL&A Public Health and the Safe & Sober Community Alliance will launch a report on alcohol-related harms in Kingston. We look forward to starting a conversation with our community about how we can ensure that alcohol is only a part of our good times. We hope to see you there.
——————————
Submitted to Kingstonist’s Community Soapbox by: Cathy Edwards and Tanya Beattie. Thanks to Todd Dwyer for the photo associated with this post.