We were incredibly happy to welcome Melinda Knox to our team this year.  She has reviewed several restaurants for us with great balance and  details that leave our mouths watering.  She has expanded our culinary horizons, covering restaurants beyond the borders of downtown Kingston and many off the beaten path.  This early review of Melinda’s got a great conversation going about Geneva Crêpe Café.  We look forward to reading more of her great reviews!

One of my favourite cities to visit in Europe is Paris. Known for its magnificent architecture and rich history, its delicious cuisine has become accessible to the novice chef, thanks to Julia Child. When I saw that Geneva Crêpe Café’s tagline is, “A taste of Paris in the heart of Kingston,” I was excited to check it out, practice my French, and sample a crêpe or two.

Owned by Kingstonians, the Café specializes in crêpes, paninis, and speciality coffees. It is a partner in the Local Food/Local Chef initiative, which means that they regularly feature locally grown and raised items on their daily menus. The restaurant itself has a bright and cheery atmosphere with lots of seating and a large outdoor patio. With its central downtown location at the corner of Princess and Clergy, it is the perfect place for a study date or a quick bite to eat while shopping downtown.

Impressed by the selection of speciality coffees the menu boosts, we decided to skip the wine (all Ontario wines, I will note), and go straight for the caffeine.

My partner, Curtis, ordered the cafe au lait (<$5), a French coffee, where the milk is added hot rather than cold or at room temperature. It came in a huge mug, sure to satisfy any caffeine addict and he said the coffee was rich, but not overpowering. I was in the mood for something a little different and ordered the almond latte (<$5), steamed milk with almond extract, chocolate, coconut and espresso. I found the latte a tad too sweet for my taste, so I’d probably opt for something else next time. 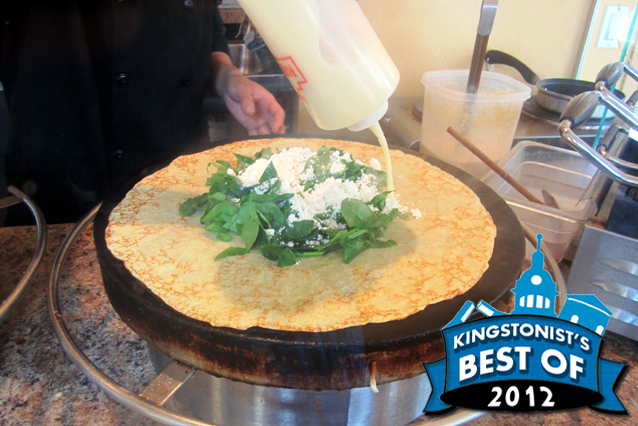 For our mains, we decided to try a few crêpes. Traditionally, a crêpe is a type of very thin pancake made out of wheat flour that is cooked on a flat, circular hotplate. According to worldofcrêpes.com, the crêpe originated in Brittany, the northwest corner of France, around the 15th century. The French term “crêpe,” comes from the Latin term “crispus,” which explains its flat, almost crisp texture. Arguably the national food of France, the crêpe is celebrated each February 2nd on what is now known as “National Crêpe Day.” However, these thin pancakes have gained popularity all over the world. Geneva Crêpe Café serves a variety of savoury and sweet crêpes, and any of these can be made with gluten-free buckwheat flour if requested. 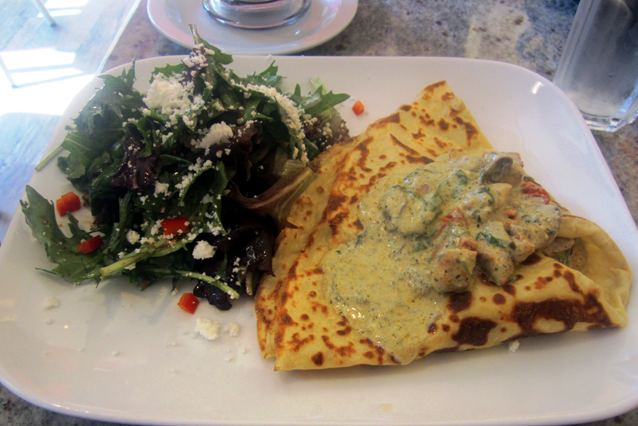 We shared the crêpe of the day, the Tuscany, stuffed with local grain-fed chicken, Italian sausage, mushrooms, tomatoes, red peppers, spinach, basil pesto and tossed in a parmesan cream sauce with a side salad of mixed greens, balsamic vinaigrette, goat cheese and red pepper for $16. The salad was light and fresh, its tangy dressing mellowed by the sprinkle of cheese. The crêpe itself had a perfect texture: slightly-crispy on the outside and soft and chewy on the inside with a fresh and tasty filling. I only wish the crêpe contained a bit more of the filling, as I found it to be a little modest for a dinner portion. 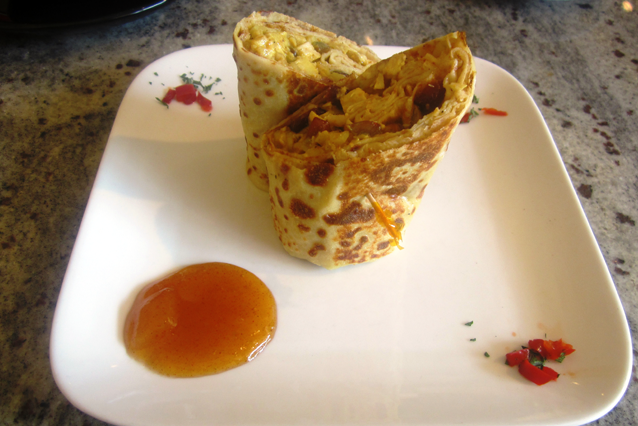 We also shared their signature crêpe, the Bombay, filled with local grain-fed chicken mixed with curry, cranberries, coconut, almonds, apple, celery and mayo for $14. The plate was expertly presented and quite beautiful to look at. The crêpe was both savoury and sweet at the same time, and the celery and apple provided a nice crunchy texture. The Bombay was served with a spiced fruit jam (apricot?) that complimented the curry particularly well. While I really enjoyed it, I found the $14 price tag to be a little steep for just the crepe. I wish it came with a side salad, or even a few pieces of fruit or veggies, as is often the case at other crêperies I have visited in Montreal and Toronto. 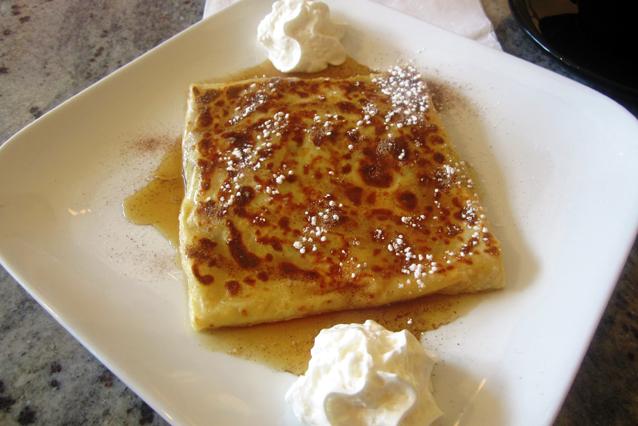 Venturing from savoury to sweet, for dessert we opted for the True Canadian, a crêpe filled with apple, Canadian cheddar, cinnamon, sugar and maple syrup for $9. It was a lovely end to the meal. The fresh cut apple, combined with the melted, gooey cheddar and sweet crêpe, were reminiscent of apple pie topped with a slice of cheddar, but more delicate. I really enjoyed this dish and I appreciated that the owner, Genevieve, approached us at the end of the meal to see how everything was.

In sum, Geneva Crêpe Café effectively fills a niche for France’s most popular food in Kingston. Julia Child may have made French cuisine accessible to novice chefs, but this Café is certainly professional. While I believe that all of the pricier savoury crêpes would be complimented with a side of some sort, I definitely appreciate that everything is made fresh to order and that they use only the finest ingredients. If French food isn’t your thing, as a coffee bistro, it has a nice ambiance and character that you won’t find at some of the chain establishments further down Princess.