In 2010 and 2011 respectively, our readers spent a glutinous amount of time predicting the outcome of a foodie feud known as the Burger/Poutine Wars (Part 1, Part 2). This past year, Kingstonist took a break from drooling over poutine and burgers, yet that did little to stifle the insatiable appetites of our hungry readers. When called upon to show some love for their favourite pizzaria and crown the best of the best in the Limestone City, people responded in record numbers.  So sit back and enjoy a slice of our most commented on story from 2012!
—————————— 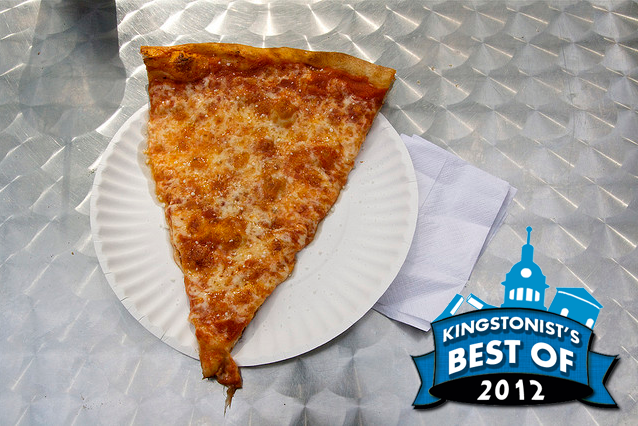 As far as I am aware, pizza is the food of the Gods. This dietary staple is an obsession of mine, and for as long as I can remember, I have proclaimed that I would be happy to eat pizza and nothing else if I were ever stranded on a desert island with an old volleyball. In any given city, the types of pizza that can be found may be broken down into three distinct categories:

While I love a gourmet treat now and again, when the mood strikes at home, I can`t get enough traditional pizzaria-style pies delivered in those unmistakable generic, white boxes. While we`ve been down this road before with our readers, this week`s poll question focuses the conversation on pizzerias in Kingston. Accordingly:

The best pizzeria in Kingston is:

Creating a comprehensive list of best pizzerias in the Limestone City was a difficult task, while selecting a clear winner was nearly impossible for me. My favourite place honestly changes based upon what I am craving, and I have to admit that I give most of my business to places that are closer to facilitate timely delivery of hot pizza. One week I might prefer “Pizzeria A” because of their crust, while the next I might lean towards “Pizzaria B” based upon the richness of their sauce, choice of ingredients and so on. In the end, I suppose it really comes down to flavour, but the history and atmosphere of local pizzerias also plays a role in attracting and retaining my business. Of course, the collection of order slips for the sake of free pizza in the future also plays a role in deciding who to give your business to.

How would you rate the competition amongst Kingston’s local pizzerias? Which longstanding and new places do you prefer to give your business to, and which do you steer clear of? What about the best place to get slice? Do you wish you could get good deep dish in Kingston?

Thanks to Adam Kuban for today’s photo.

One thought on “Best of 2012: Best Pizzeria in Kingston”