In late 2011 Coffeeco devotees had a real sense that trouble was brewing at the business’s Johnson Street location. Less than two weeks into the new year, owner Rich Ottenhof explained the dire situation to his customers, concluding that landlord Hugh Mosaheb’s actions would result in the unwanted closure of the store.  Ottenhof’s open letter sparked an outpouring of supportive comments from our readers, a healthy discussion regarding the pitfalls of commercial real estate and most importantly, eager anticipation of Johnson Street’s successor: Coffeeco Market Square!  This story epitomizes the difference a year can make.
—————————— 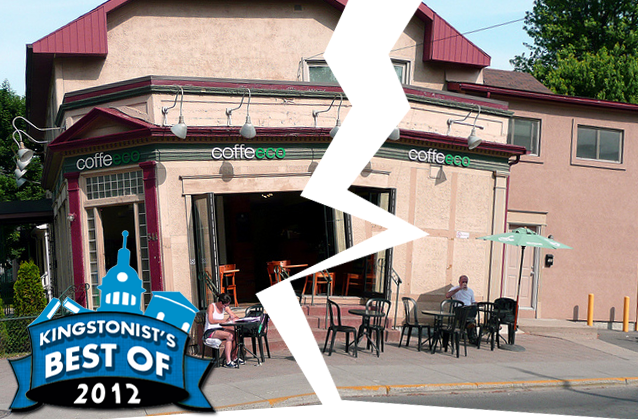 I have a disappointing update to our [Coffeeco’s] efforts to reach agreement on a lease extension at our Johnson Street location. For those of you who haven’t been following I’ll provide a detailed update.

We have been sub-letting space at 344 Johnson Street from a failed coffee business and abiding to the terms of an original lease signed in 2001. The original lease contained provisions for 2 renewal terms of 5 years each for a total of 15 years. We assumed the space part way through the first renewal period ending February 28, 2011. Before the renewal date, we made the landlord aware that we wanted to renew the lease but were looking for some changes which would permit us to license the location to a third party if we desired. The landlord took the opportunity to ask for a 40% rental increase, to add a provision for a personal guarantee, and to compel us to replace a broken Furnace and Air Conditioner which would both immediately become the property of the landlord. In addition to this, the landlord wanted us to be responsible for upgrading a sewer line determined by the City to be insufficient to service the building. As a show of good faith negotiating on our part, we paid the increased amount with the expectation that we would negotiate a lease and continued to pay the 40% increase for 11 months to date. Up to this point the landlord was unwilling to concede any points to us and it became clear that the cost of changing the lease was simply too high and therefore we would instead just renew under the old terms and finish off the last renewal term.

Through our lawyer we notified the landlord on November 30, 2011 of our wish to renew under the terms of the original lease and to be given credit for the 10 months of overpayment beginning January 1, 2012 and to submit to arbitration in setting a new rent amount.

The landlord, local real estate agent Hugh Mosaheb of Royal LePage on Queens Street responded December 21, 2011 by sending us an arbitrary bill for Common Costs including the cost of the City sewer inspection and a bill for $500 to be paid to Mosaheb’s 13 year old daughter for sweeping the driveway. (Seriously!)

Mosaheb turned up the heat on Friday December 23 in the afternoon by claiming through his lawyer that we did not have the right to renew the lease and that we were in fact operating on a month to month basis and that he demanded us to vacate the property by January 31, 2012. I immediately informed Mosaheb of how his actions would appear to the public should we release the details through social media. Hugh Mosaheb quickly had his lawyer phone, email and send a letter threatening a defamation lawsuit should any details of the negotiation become public, a threat Hugh Mosaheb repeated in an email.

In my response to his email, I indicated that my main concern was for the jobs of my staff at Johnson Street who deserved to know before Christmas whether they would have any jobs in the New Year. I also stated that I wanted assurances that we could stay until our new location was open so we could transition staff and avoid layoffs. Despite this sincere request, Hugh Mosaheb declined to grant that and is sticking to his demand that we leave by January 31.

The first business day of January I had a discussion with a highly regarded local commercial real estate broker who offered to intervene as an impartial participant in order to secure an extension and perhaps a new lease agreement. Mosaheb indicated to the commercial broker that he would respond in a couple of days after he was informed of the tight timeline required to give staff proper notice of termination. That was seven days ago.

Yesterday afternoon I received a phone call from my lawyer indicating Hugh Mosaheb had dismissed his previous lawyer and engaged a new lawyer to represent him, normally an indication of a bad client, not a bad lawyer. The new lawyer was asking for a meeting between all parties. When asked for clarification we were informed that our leaving the location was not negotiable. While I am eager to engage in a discussion with a reasonable and responsible person capable of making a decision, I am unconvinced that Hugh Mosaheb is capable of meeting my expectations. Mosaheb has taken every opportunity to negotiate in a less than conventional way, from altering digital lease documents without proper notation, stalling negotiations because of poor communication with his lawyer, submitting questionable invoices, showing our space to prospective tenants while we had a valid lease, changing lawyers, ordering eviction the day before Christmas Eve, raising the rent without consent 40%, expecting that we pay the HVAC replacement, and on and on. Further, Mosaheb knows that his arbitrary actions are affecting our staff whom all rely on us to pay their rents, groceries and schooling.

So where do we go from here? Given the lack of good will existing in our relationship, in order to protect my equipment, we will be closing permanently at Johnson Street on Friday January 27 at 8:30 pm.

Mosaheb has been given almost three weeks to revoke his arbitrary eviction notice, has been informed of the devastating consequences to my staff but still stubbornly holds to his demand that we leave the premises.

5 thoughts on “Best of 2012: Battle Brewing Over Lease Agreement”