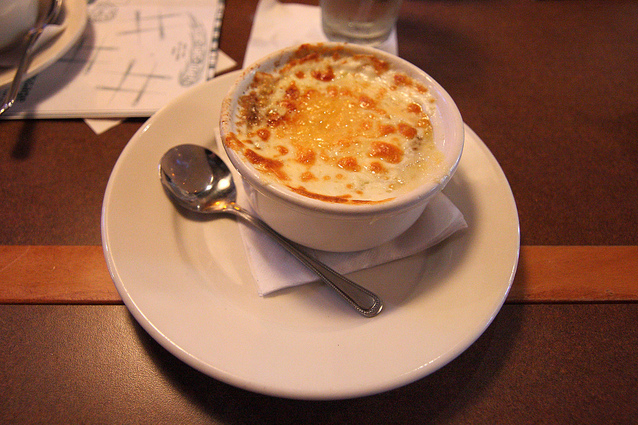 As an avid walker in downtown Kingston, I’m both thrilled to have the fresh, cold air to breath in and miserable to trudge through the wet slush expected to coat our sidewalks for the next few months. However, with the new season’s ambiance brings with it old seasonal dishes sure to warm you up on a cold day including my personal favourite, French Onion Soup.

I will be the first to admit even the easiest dishes trouble me in the kitchen and French Onion Soup is no exception. As a result, I have made it my mission to scout out downtown’s restaurants that serve the cheesy masterpiece I have lately been obsessive over and make a list since it was not as easy to find as I thought it would be.

I must confess to being surprised how each bowl topped with bread and melted gooey cheese has differed in taste so dramatically as I was under the impression the soup is often made with the same few ingredients: onions, broth, salt, cheese and bread. To my pure delight, I was wrong.

Below is a shortlist of the best places I’ve been able to find French Onion Soup in Kingston.

The General Wolfe: Though a bit of a trek from the downtown core considering the ferry time, taking the ride to Wolfe Island is definitely worth it for this hot, hearty classic. This was the first bowl I dived into this season and was not disappointed, in fact I almost asked for a second helping. When I first dug my spoon in, the hot broth erupted out of the sides and enveloped the crispy croutons to make them soft. I found this soup a bit more salty than sweet which worked as the cheese wasn’t too sharp. At only $6, it was the perfect starter.

The Keg Steakhouse and Bar: It came as a surprise to me The Keg served French onion soup – I don’t know why, it was just not a dish I would envision on their menu. Once I saw it on the list, my decision was made and it was a decision I did not regret. Order with a glass of red wine and you may think you have died and gone to heaven. The Keg’s French Onion Soup arrived piping hot which was no trouble – the cheese alone was a mouthwatering mix of Swiss and Parmesan cheese and worth picking off and eating as the soup cooled down. The bowl had a lot of sweet onions in it which made it more of a meal soup than just an appetizer, so for those with not much of an appetite, this can suffice. A bit pricier than its contenders at $10.95 but worth indulging in the filling soup in a charming environment

Tir Nan Og: This is a perfect location and atmosphere for French Onion Soup. Between the water and the market, you can enjoy the view of the skating rink while dipping into some cheesy onion soup. This dish was a bit different than the other soups I have tried – rather than grated cheese, this generous serving was served with layered slices of Swiss. Though a bit harder to break into, this soup was filled with onions in the bottom and had a very tasty broth base. At $7, I would recommend it to those looking for a comforting lunch. Would be great paired with a sandwich!

King Street Sizzle: Hands down this has been the best French Onion Soup I have had. King Street Sizzle – beside the Four Points Sheraton downtown, delivered an overflowing portion of soup layered in a heaping amount of cheese on top of bread that still remained chewy within the hot broth and onion mixture. Letting it cool down was difficult because it was that good! At $7 it was a steal considering the portion size – I had a hard time finishing it all but inhaled every last onion. The atmosphere in Sizzle is also soothing and cozy. I recommend King Street Sizzle to break away from work for lunch as it isn’t too busy so you will get your food in a timely manner.

Have you had an experience eating French Onion Soup and other restaurants in Kingston? Please let us know below and we can update the list! Credit to Sam Howitz for the photo accompanying this tasty guide.