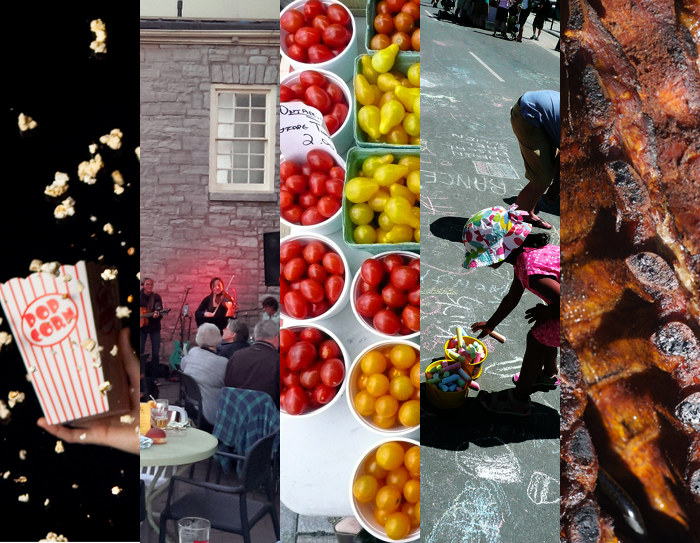 Summer is undoubtedly the busiest season for events and festivals in the city of Kingston. Tourists flock to the city to take in annual spectacles such as the Buskers Rendezvous, while local residents enjoy free activities including the public market, Princess Street Promenade and the list goes on. With so many reasons to stay and play in the city during this season, it’s hard to justify camping, Wonderland and road trips that get in the way of our enjoyment of the best summer events in Kingston.  Accordingly, Kingstonist’s top five things to see and do in the city aims to provide a list of events you don’t want to miss out on. Granted, Canada Day festivities, ArtFest, and a few other summertime faves have already passed, but here’s still plenty to look forward to. Our list is bursting with everything from family-friendly hallmarks and live music, to budget conscious festivals and delicious local cuisine. Dive in, mark your calendars and enjoy our selection of the best summer events in Kingston.

Movies in the Square, 26 June to 28 August 2014: in the age of Netflix, IMAX and endless superhero blockbusters, one would think that there’s very little room for screening the classics. And yet, every other week, kids big and small flock to Market Square at dusk to enjoy an outdoor cinematic experience complete with various temptations from the concession stand. The sight of hundreds of moviegoers comfortably lazing about in lawn chairs in the shadow of City Hall is truly remarkable and a telltale sign of Summer in Kingston. If the atmosphere and treats aren’t enough to entice you, keep in mind this year’s lineup of films includes a mix of old classics ranging from The Princess Bride to Jurassic Park, as well as new faves including Frozen and The Avengers. Check out the full schedule for what will be screening throughout the remainder of the Summer: here.

Pan Chancho’s Backyard BBQ & Band Series: 26 June to 28 August 2014: last Summer I stumbled across Pan Chancho’s Backyard BBQ & Band series, and was treated to one of the most memorable nights of the season. For Summer 2014, the gourmet bakery and cafe have arranged a stellar lineup of 10 local musicians to provide the entertainment on select dates during the supper hour on their quaint, hidden patio. While diners enjoy soulful tunes, Pan Chancho serves up a mouthwatering feast that’s ripe with local ingredients and playful twists on traditional barbecued cuisine. Seating is limited, but for the low price of $25 per person, those who are able to find a spot on the patio will get their fill in terms of grilled gourmet fare and talented local musicians including the likes of: Emily Fennell and Chris Koster, Kris and Dee, Calamity Janes, Beginners Guide to Endings and more!  The full schedule can be found here.

Kingston by Fork, now through until the end of August 2014: highlighting casual, gourmet and local flavors, Kingston by Fork is the city’s premier walking tour for foodies!  Now in its forth year, this seasoned tourist operation offers the perfect way to nibble around some of the best of downtown Kingston’s restaurant scene.  Eat your heart out as you explore Kingston’s culinary landscape with their two distinct tours:  Homegrown Eats (Thursdays and Saturdays at 12pm) and an Edible Escapade (Wednesdays and Fridays at 1:30pm).  With each tour you’ll hop from one locally owned hangout to the next, and explore the vibrant local food community, from producer to consumer.  With pricing that sure to fit most budgets and private tours available upon request, Kingston by Fork is a definite highlight of the season.

Princess Street Promenade, 2 August 2014: voted by our readers as the second most anticipated event of this Summer, there’s no denying that Kingstonians have fallen in love with this pedestrian-friendly street festival. Now in its fifth year, this massive street festival spans Ontario to Division along Princess Street, offering free and affordable treats from local merchants and restauranteurs. Past years have seen Princess Street packed with everything from climbing walls to BBQ cookouts, dodge ball to dance demonstrations, live music and expanded patios! We can’t wait to see how this year’s pedestrian’s paradise will shape up with old faves and new additions.  If only we could partake in the Princess Street Promenade each and every weekend during the warming months!

Kingston Rib and Craft Beer Festival, 5 to 7 September 2014:  while I’m not looking forward to the end of Summer, I am eagerly anticipating the return of ribs and craft beer to the Memorial Centre grounds this fall.  Last year’s inaugural festival exceeded expectations and demonstrated the local appetite for award winning brisket, blooming onions, roasted corn and smoked ribs slathered in southern-inspired BBQ sauce.  Of course, the cold frosty craft brews served up by Mill Street, Big Rock, Railway City, Lake of Bays and others were an undeniable hit.  This year, you can expect a few more breweries to  join the mix.  With enough down home fare to please the pickiest of eaters, its no wonder why this relatively new festival was voted as the most anticipated event of Summer 2014!

Photo credits to: charamelody, Luis Ramirez and a few from our very own Flickr.