When Kingstonians wish for certain food trends to hit town, it seems like our wishes are almost always fulfilled.  As a result of many of our polls and other food-related posts, Kingstonist readers expressed a desire for Caribbean food more than once.  That wish was answered in early Spring of 2014 when Bay Jam opened on Montreal Street.  Our intrepid food reviewer, Melinda Knox, paid Bay Jam a visit, giving us a taste of what they have to offer.  Since Bay Jam’s opening, we have noticed that two other Caribbean restaurants have set up shop in The Limestone City.  Could the Caribbean food trend be the next sushi?
——————————
Entrepreneur Charmaine Blair has brought the taste of Kingston, Jamaica to Kingston, Ontario.

Until recently, Caribbean specialties like jerk chicken and patties were only found in bigger cities or by visiting the islands themselves, but now you can enjoy the flavour right here in the Limestone City’s only Caribbean eatery, Bay Jam. 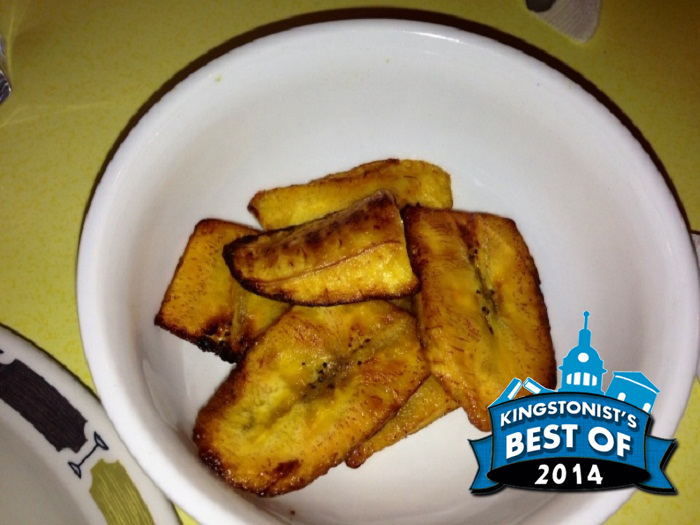 Influenced by the food culture of islands like Barbados, Jamaica, and Trinidad, Bay Jam is actually the only tropical escape between Oshawa and Ottawa and fills an important gap in the Kingston food scene. Using fresh herbs and spices, and locally-produced meat and produce, Charmaine and her staff are dishing up homemade favourites like patties, roti, jerk, and stewed dishes of oxtail, chicken, pork and goat, introducing the community to these island delights.

The restaurant, which opened its doors at the end of March, is tucked on Montreal St. between Queen St. and Princess St. Patrons can either dine in or takeout. Upon entering, the decor immediately reminded me of a diner with booths along one wall and seating at the “bar.” It is decorated in warm, bright colours and, with the island tunes playing in the background, it does feel like a bit of an escape from the city (minus the traditional sun and sand that are left to the imagination!). 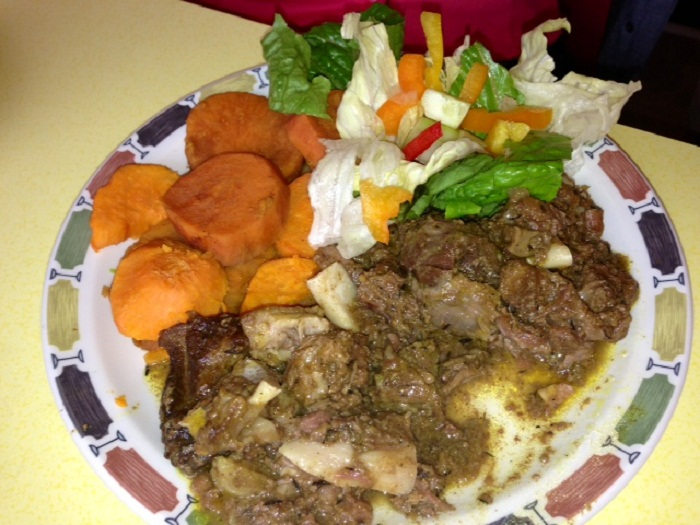 About a week after Bay Jam opened, we went with friends on a Tuesday night. It was packed. At 5:00 most seats were filled and there was constantly a line for takeout. I was glad to see that the restaurant was doing well. As with any new establishment, it takes a while to anticipate demand and work out the kinks, for which they were apologetic. We understood this going in and while our food did take a while to come out and they had run out of some items because the restaurant was so busy, that fact that it was so hectic on a Tuesday shortly after opening is a great sign going forward. Service was friendly and, when the food arrived, it was fresh and delicious. 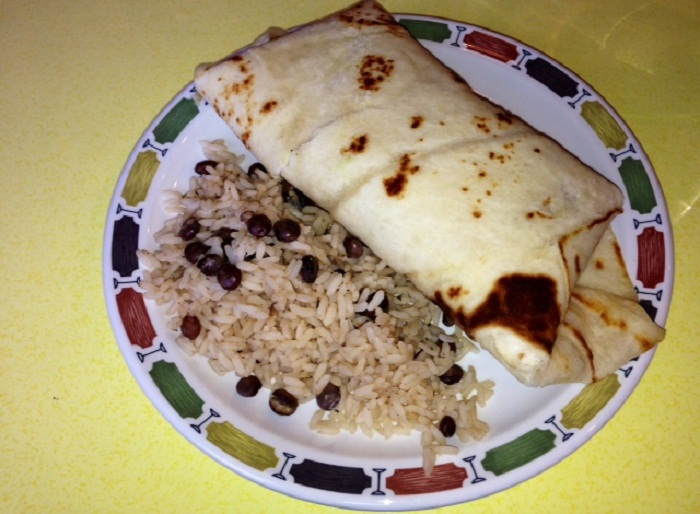 For my main, I ordered the boneless chicken curry roti wrap for $8 with a side of rice and peas. Roti is unleavened Indian-style bread made from stoneground wholemeal flour. Roti wraps are a popular form of fast-food all over the Caribbean. The roti tasted fresh and was a good balance of chewy and flaky; it was stuffed with a good portion of chicken in a mild curry sauce. Next time I think I would add hot sauce for some bite, but I thought the combination of the chicken curry and the fresh bread was a winning one. Rice and peas (pigeon peas or kidney beans) are a staple side in much of Jamaican cooking. You’d think that the combination of rice and “peas” would rather unexciting and bland, but it can be made with a combination of spices that can really enhance your main. This side was peppery and fragrant and was a good, filling, complement to the roti.

We also shared a side of plantain, which was priced very reasonably at $1.20. A “cooking banana,” plaintains are usually cooked before consumption and are more starchy and less sweet than the bananas found in our fruit bowls . I thought they tasted like a combination of banana and potato. I really enjoyed trying something new and would get this again.

Curtis and one of our friends ordered the curried goat which comes with salad and a choice of sides for $5/$8. Be careful of the many small bones that it is stewed with, but they definitely do add flavour and the goat is tender and mild. The sweet potato side was a good match, adding freshness. Other options include rice and steamed vegetables and the rice and peas. 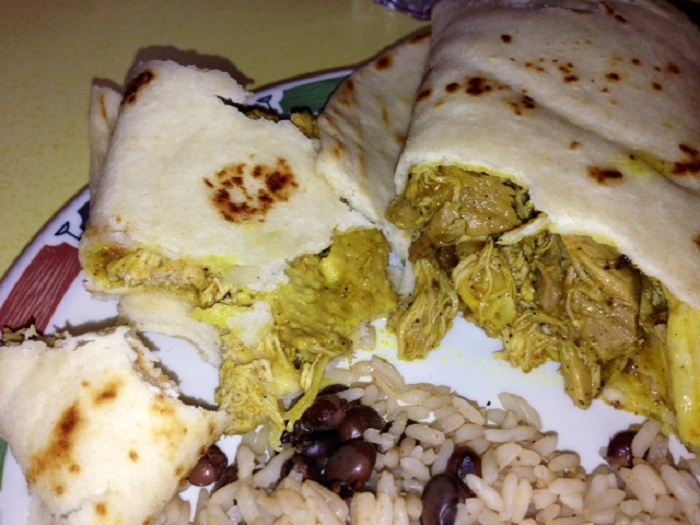 Our other friend ordered the jerk pork sandwich. Along with jerk chicken, it’s probably the best-known Caribbean dish and lived up to its exalted stature. Don’t be scared away by the “spicy” description on the menu: they can adjust the level of heat to your liking, although why not go for the most authentic island experience?!

Bay Jam is a new restaurant, dishing up something new and unique in Kingston. All considering the takeout traffic and the fact that the restaurant was so new, we had a great culinary experience here and we’re excited to go back and try something new. I have my eye on the jerk chicken and macaroni pie. But of course, when you know something’s good, there’s nothing wrong with getting it again; that’s why Curtis wants more spicy beef patties.