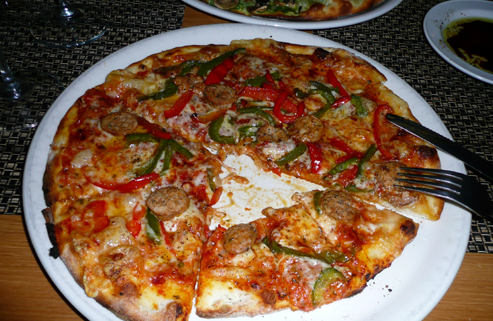 After digging ourselves out over the weekend, I decided that it was high time to venture out for a festive treat featuring my favorite food: pizza. Now, I am somewhat of a pizza aficionado, but that’s not to say that I am a snob about my ‘za, rather I have certain criteria that must be met. Thin crust is a must, traditional meat options are preferred, and cheese is also a key ingredient. I don’t go for triple stuffed crust, overly doughy recipes, or toppings that have no place on an Italian pie. Oftentimes gourmet pizza restos try to dress their pies with items such as donair meat, BBQ chicken, and even apples. Although I have no problem with chefs getting creative from time to time, I’m more of a fan of slight variations on my all time favorite food, rather than radical deviations. With that in mind, let’s sit down at Atomica, and see how they do.

Kingston’s gourmet pizza and wine bar has a very posh, and even futuristic appeal. The massive light wall behind the well stocked bar is constantly changing colours, which continuously changes the mood inside the restaurant. The kitchen is tucked away in the far corner, giving diners a clear view of all the dough-slinging action in and around the stainless steel-clad pizza oven. The wall opposite the bar and food prep area has been fitted with a beautiful new stone veneer, and angled mirrors near the top, which reflect light from various sources.

Although we didn’t have reservations last night, they are highly recommended as we have been turned away in the past. We entered and were quickly whisked away to a freshly wiped booth, and presented with both food and drink menus. Now, Atomica has a pretty decent selection of wine, however even their cheapest bottles are vastly overpriced. I’ve found that this really isn’t unique to Atomica or Kingston, as most decent restaurants in any city seem to inflate the cost of alcohol. I suppose that’s simply the cost of doing business.

My table quickly ordered a few appetizers, and entrees, and were left alone with a bottle of vino. As I alluded to before, this is a popular place, so you also have to deal with the noise coming from all the other tables, which can strain the ear if you’re looking for a quiet, intimate dining affair. Despite the full house, our salads and apps arrived in no time. In my opinion, Woodenheads makes a far better (and garlic-i-er) Caesar salad, but Atomica’s Caesar does the trick. Moving on to the pizza, in which case we ordered the Italian Job (la bomba spicy tomato sauce, fontina, fennel sausage, peppers & onions), and Fungi (basil pesto, fontina, mixed mushrooms, garlic, parmigiano, truffle oil) respectively. A quick drizzle with their spicy olive oil, and we were quickly devouring every last crumb and splash of sauce off the plates.

At $14 a pop, the cost of these pizzas are pretty much average at Atomica, but it’s money well spent if you really enjoy pizza. One could even keep their bill under $30 if they were willing to forgo appetizers and drinks. Despite pizzas with ingredients such as dill cream, smoked salmon, zucchini and of course the dreaded roasted chicken, it was pretty easy for this old pizza hound to find a satisfying, yet traditional pizza pie. High marks all around put Atomica in a neck and neck tie with only one other establishment, which is also worthy of the title: best “fancy pizza” joint in Kingston.

Check out some additional pics of Atomica on our Flickr.