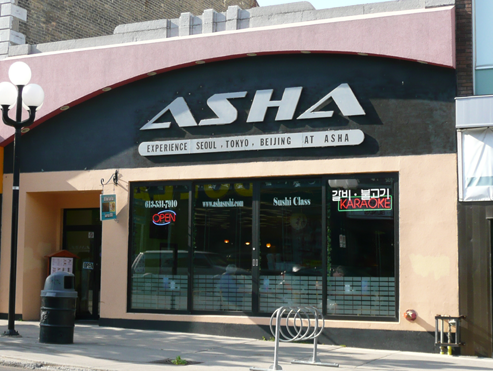 Asha Sushi is permanently closed. Looking for a place that’s still open? Check out our restaurant reviews and recommendations for establishments that are still open and serving great food in Kingston.

Kingston has a great spread of ethnic eateries, and although I often opt for Darbar‘s delicious madras, it would seem as though curry is not the preferred flavor in Kingston. With Sakura opening up on Bath Road, as well as a downtown that is literally bursting with a few extravagant sushi restos, and many smaller “hole in wall” take out establishments, it’s clear that Kingstonians are crazy about sushi. Now before I go any further, I must warn you that my sushi experience was limited to avocado rolls before I dreamed up this adventure, and in my mind, they barely qualify as sushi. Thus, in an effort to broaden my horizons, and expand the Kingstonist food and drink section, I ventured into the unknown, and found myself inside Kingston’s best sushi restaurant, Asha.

A few year’s ago, the Zing Noodlery occupied this prime downtown real estate, and I was honestly sad when it closed. So much so that I refused to try out Asha until this very day, although that might have been because they specialize in sushi. From Princess Street, Asha is a pretty impressive looking establishment with it’s sleek silver lettering, and neon lights that promise Karaoke. The inside is a fusion of traditional elements such as bamboo, and lanterns, while other lighting features give Asha a party-like atmosphere. Although it was daytime when we sat down, I have peeked inside on numerous occasions when the karaoke party is rocking and drinks are flowing.

Admittedly, I had no idea what the difference was between sushi (nigri sushi, maki sushi, etc…), sashimi and dim sum until I got the nerve to try out Asha. After a bit of research on Wikipedia, I was armed with enough knowledge to comfortably order off of Asha’s menu, which can conveniently be viewed online. This was a vital tool for a first timer such as me, as it let me make a game plan, before ever setting foot in the restaurant.

Upon entering Asha, we were whisked away to a table, and our drink order was taken promptly. After a quick run over the menu, I managed to convince myself to stick to the plan, which involved many orders of dumplings, vegetable tempura, maki sushi, and a plate of spicy chicken for our table to share. The latter was the safety net in case I did not enjoy the rest of our selections. Before our order arrived, we were served miso shiru, a traditional Japanese bean paste soup, which was an unplanned but awesome way to start off the meal. Plate after plate of food arrived shortly thereafter, and we managed to eat all but a small amount of spicy chicken, which we had placed in a take away box. Keeping in mind that it was my first time, I thoroughly enjoyed my dining experience at Asha, and I have already promised that I will be sampling different items upon my return. I am even considering taking the gang over for a Karaoke session, although I will probably need quite a bit of sake (courage), before I get up and make a fool of myself.

Until next time, keep those comments coming, as today is the last day for our June comment contest. As well, if you have a suggestion for our next culinary destination, please drop us a line.