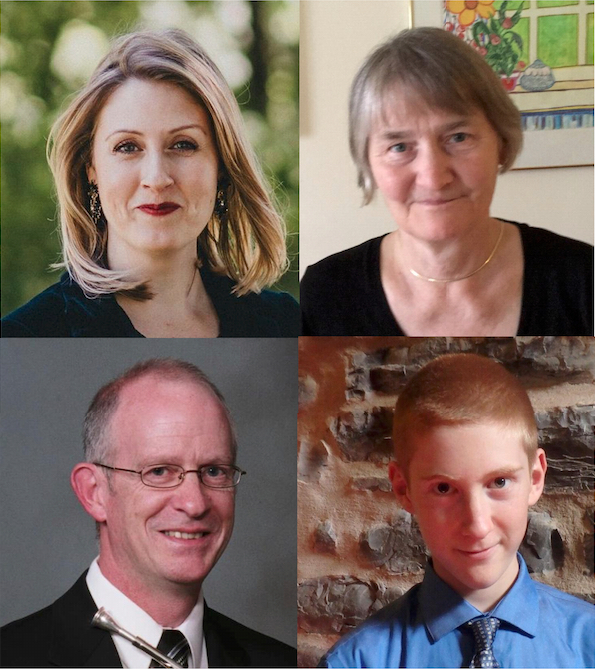 Sunday 1 March 2:30pm.
The Spire (82 Sydenham St., Kingston).
Tickets: $25 ($20 students, seniors/free 16 and under) at Novel Idea, Tara Natural Foods, Arden’s Music, orchestra members, and http://www.orchestrakingston.ca/tickets/
_____
“Usually you get just one soloist in an orchestral show,” music director John Palmer points out, “but Orchestra Kingston’s ‘Art of the Soloist’ will feature four artists,” presenting music filled with a wide variety of stories about life, passion, and human drama. Artists include Colleen Renihan (presenting Mussorgsky’s ‘Night on Bald Mountain’), Inka Brockhausen (Gershwin’s ‘Rhapsody in Blue’ for piano), Cory Van Allen (Saint-Saens’ ‘Morceau de Concert’ for French horn), and Jonathan Moellman (Kabalevsky’s ‘Concerto for Violin’). Bonus selections include Beethoven’s heroic ‘Egmont Overture’ and the most famous music from Humperdinck’s fairy-tale opera ‘Hansel and Gretel’.
?
“The Art of the Soloist” concert is fondly dedicated to Alan Grant (1940-2019), a founding member of Orchestra Kingston, which began as chamber music in his home.
_____________
Explore the story-behind-the-story of Mussorgsky’s “Night on Bald Mountain” when award-winning teacher, author, and mezzo-soprano, Colleen Renihan together with Orchestra Kingston, show you how Mussorgsky used brilliant, wordless, musical story-telling to evoke feelings of terror, inspiration and hope in his audiences.

“This is exciting,” enthuses mezzo-soprano and Queen’s Dan School of Drama and Music National Scholar, Colleen Renihan. “I’ve recently heard Orchestra Kingston perform great, powerful music like Holst’s ‘The Planets’ and R. R. Bennett’s orchestration of Richard Rodger’s ‘Victory at Sea’, but this will be the first time I get to host a musical exploration with them of how Mussorgsky’s perfect piece of musical story-telling conjures such vivid, almost cinematic imagery, and makes us feel so many emotions.”
Many listeners were children, watching Walt Disney’s animated “Fantasia”, when they first encountered Mussorgsky’s ‘Night on Bald Mountain’ as performed by The Philadelphia Orchestra conducted by Leopold Stokowski. “Since ‘Fantasia,” says Renihan,” our culture has become even more visual, and that’s the beauty of returning to this piece, now. Each of us brings something unique to the music. The audience participates in its creation, each of us painting our own personal narratives.”
__________
Cory van Allen performs “Morceau de Concert” by Saint-Saens. “I have had people tell me, after hearing me play this, ‘I didn’t know the horn could do that!’” laughs van Allen, explaining that this music is “a real show piece for my instrument, using the whole range of horn sounds.”

“When I first picked up the French horn,” van Allen admits, “I made a terrible noise.” However, after he heard Dennis Brain, a virtuoso who popularized solo horn performances, “I was inspired to listen, study, and learn,” recalls van Allen. Born into a musical family, van Allen’s parents (piano and violin) let him make all the noise he wanted. Having made significant progress, he loved to play horn very high and very fast. “You know, at that time I still had my ‘showing off muscles’. However, as I got older, I learned,” he confides, “how to make more music with less flash (and now with less muscle).” He continues, “I was incredibly fortunate in my choice of parents; my dad and mom were concert musicians and we used to play the Brahms horn trios together,” van Allen recalls fondly. He advises every budding musician to “find something you like and seem to have a knack for and you’ll be surprised at how fast you can become really good at it. Play music while you have the chance. It will be with you all your life.”
____________
Inka Brockhausen performs Gershwin’s exciting jazz-classical fusion, “Rhapsody in Blue”, a landmark in American music, written by Gershwin in a four-week storm of creativity.

“I had been studying, playing piano, and composing a bit, as a little girl in Germany,” Brockhausen states matter-of-factly, “but one day when I was in my teens, my father brought home from America, some Gershwin recordings and I was stunned, it was so beautiful.” She recalls, with a laugh, “When I first heard Gershwin’s jazz-classical fusion, his rhythms, and genius harmonies, I knew right away they were exactly what my body needed.” When she got to Kingston, years later, “I played with Alan Grant,” to whose memory this concert is dedicated, “and other wonderful musicians, who helped Alan form a big group that developed into Orchestra Kingston.” Brockhausen extols music as having the “same physical effects as many of the biological enzyme functions I teach my students,” in her ‘day job’ as a biochem researcher and associate professor at Queen’s. “Whether I’m listening to, or playing ‘Rhapsody In Blue’,” she insists, “it always makes me feel so good: the harmonies, the chilling combinations that all resolve at the end … well, all my worries disappear. That’s what music is for!”
____________
Jonathan Moellman, four-time provincial music festival award-winner, performs a real “people’s concerto”, the youthful, exuberant Kabalevsky ‘Concerto for Violin’ featuring melodies that are so catchy, audiences will be humming them long after they leave the concert.
?
“I feel the audience’s emotional response as they are drawn into this music,” Moellman reveals, adding, “and the adrenaline excitement gives me an extra focus and concentration.” Along with his musical siblings, he is a multi-award winner, and happily explains his love of music. “Great composers have that genius to translate feeling into sound, to take a journey through human emotional experience,” Moellman enthuses. “In the Kabalevsky you’ll feel the full sweep of human emotion in one piece. Plus, there are melodies that are unforgettable. It’s energetic, playful, bright and quirky. But it can also be slower, reflective, more pensive, and quite haunting in places, before returning to powerful, Russian dance-like themes at the end. And the violin has a beautiful singing voice, the sound is so human.” Moellman laughs: “There’s definitely a lot here for young soloists to show off. I so look forward to my first rehearsals with Orchestra Kingston and in particular, being a part of our vibrant, local musical scene.”