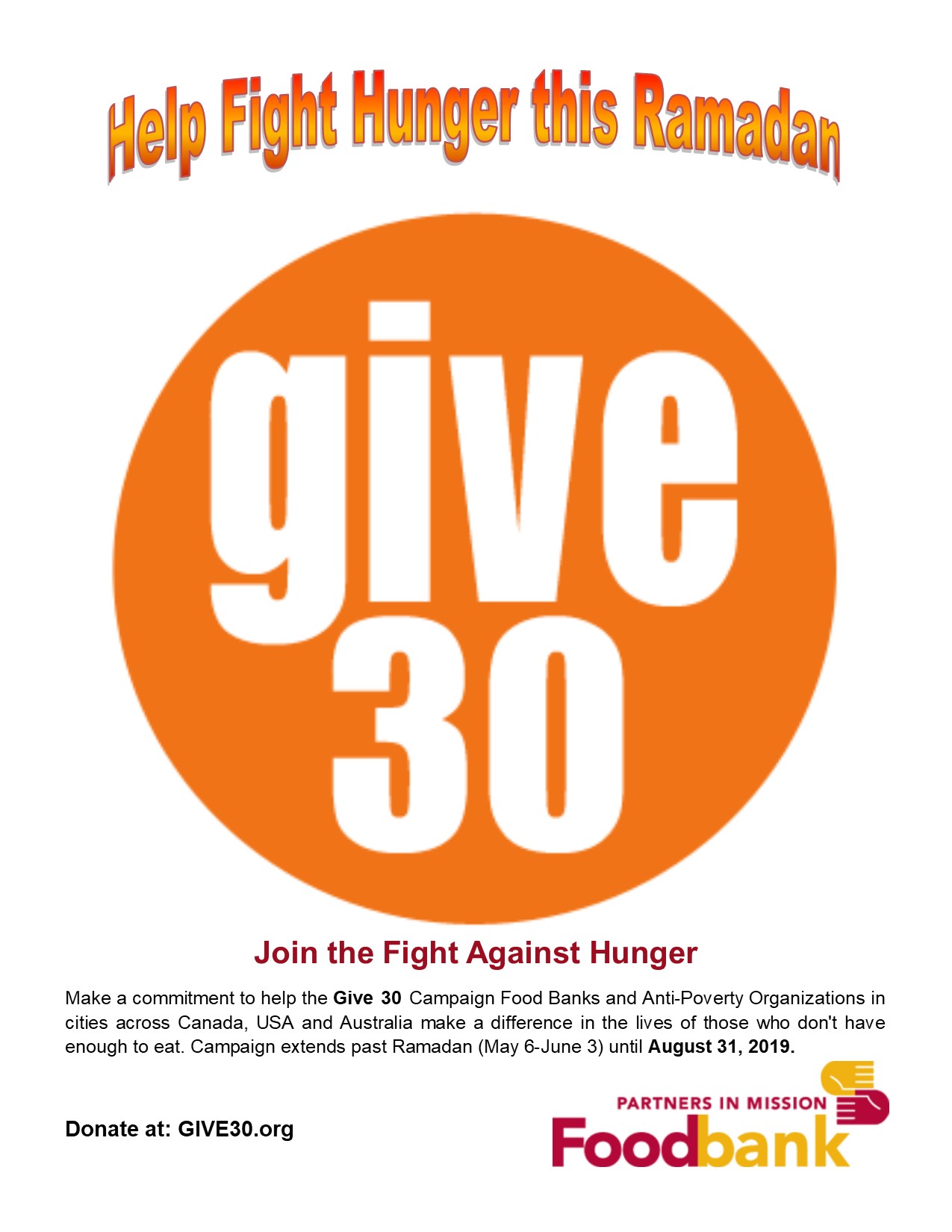 [Kingston, ON] – Food banks across Canada, the United States and Australia are taking part in Give 30, a unique grassroots volunteer-run initiative combatting hunger in Ramadan.

Give 30 was founded in 2012 to bring attention to hunger in our communities and encourage people of all backgrounds to support food banks during the month of Ramadan through GIVE30.org. The initiative has raised almost $1M to date and now supports 18 major food banks and anti-poverty organizations across Canada, the United States and Australia, which together serve hundreds of thousands of people

Give 30 motivates people who are fasting in Ramadan to donate the money they save from skipping meals over the month. People who aren’t fasting can also take part, says Give 30 founder Ziyaad Mia, noting that donations have come from people of all faiths and backgrounds. “Brown bag your lunch for the month to save money or tally up 30 days of coffee and snack money. Whatever it is, it can make a difference in the lives of those who don’t have enough to eat.”

This is the sixth year for Give 30 Kingston, which has raised $20,655 in support of Partners in Mission Foodbank to date. Sandy Singers (Executive Director, Partners in Mission Foodbank) emphasizes that many of the donations they receive come from campaigns like Give 30. “Any time someone wants to raise money for us, we support them through our social media and our strong profile in Kingston.” We hope to build on our previous efforts to expand this initiative and raise more awareness about the problem of hunger in our own community. “We tend to forget about the people who are hungry within North America,” says Mona Rahman (Give 30 Team Kingston). “We always think of people in other countries when we think of hunger, but forget that there are those who are struggling in our own neighbourhoods. Hunger is not an ‘over there’ problem — it’s everywhere.”

“Give 30 is a grassroots volunteer-run movement that’s grown phenomenally and attracted a diverse group of supporters,” says Mia. The Toronto lawyer and social justice activist attributes the significant growth of the campaign to the simplicity of the idea and the power of compassion to unite people regardless of differences. “Social media has been a great booster too,” he adds.

Ramadan is about giving, building community, and understanding the challenges of hunger that others face, says Michael Taylor (Give 30 Team Kingston). That is why it works so well motivating people to give. “Everyone can participate in the spirit of Ramadan,” Taylor emphasizes. “Give 30 is not about any one group or faith; it’s about uniting in common humanity. Hunger and poverty know no race, religion, ethnicity, creed, gender or age and that’s why it’s important for everyone to join Give 30.”