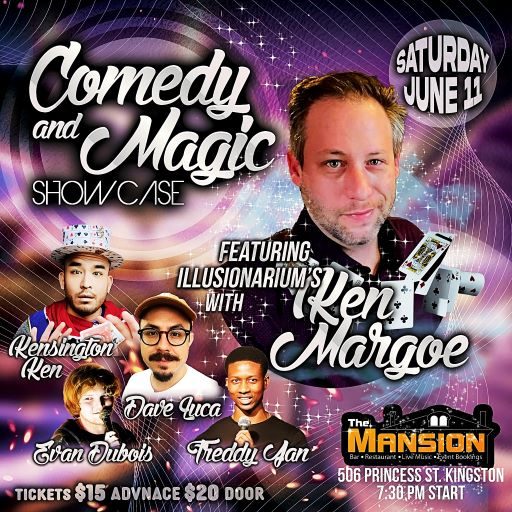 Hello Kingston! We’re coming all the way from Toronto to bring you an evening of laughter and amazing magic! We have professional Toronto comedians to entertain you, and our headliner magician Ken Margoe from the Illusionarium magic spectacle this past year.

We keep bringing him back because tickets always sell like hot cakes in our Toronto shows! Come see what all the hype is about.

Tickets are just $15 in advance, and $20 at the door. If you missed the Illusionarium Toronto show last year, here’s your chance to see one of their main magicians for a fraction of the price!

Your featured performers are:

Ken Margoe: This guy catches bullets for a living! Ken was the headliner in the VIP room at Illusionarium, and holds the record for the most dangerous magic trick: 26 bullet catches in one day. He has performed for the New York Knicks, Woody Harrelson, 50cent,The Rolling Stones, Much Music, City TV, and many more. This is not a show that you want to miss.

Dave Luca: Dave moved to Toronto in 2016 to pursue a career in standup comedy. Since then, he has gone on to achieve great things, such as winning Vaughan’s Best Comic competition in 2019, and performing for packed stages across the GTA. Known both for his concupiscent comedy style and misuse of big words, Dave Luca performs in bars and clubs across Ontario looking to spread his message of overeating and antisocial behaviour.

Evan Dubois: Evan considers himself a witty ginger with a guitar. He’s been featured many times at Yuk Yuks Toronto, and runs his own comedy show “The Banana Room”. With his mix of stories, observations and songs, there is always something for everyone!

Freddy Jan: A relative newcomer to the scene, Freddy is one of Toronto’s fastest rising comedians and has been performing at packed shows all across the GTA. He brings a mix of witty humor and dry sarcasm, and we’re sure you will love his show!

Kensington Ken: Ken likes to hide behind his cheap magical gimmicks that he bought from Wish, and they often bring mixed results. They work wonders on TikTok where he has over 10 million video views, but they sometimes malfunction on stage with hilarious consequences. You’ll laugh, you’ll cry, and you might even be amazed. We’re not sure if you’ll be fooled, but we’re sure you’ll love his magic act!

This is a one night only event, so don’t miss out. See you there!