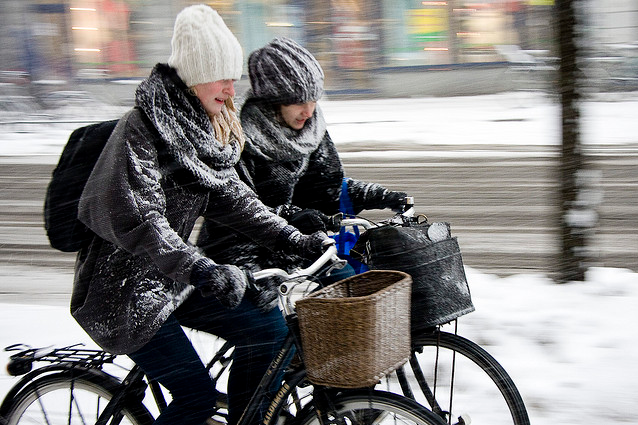 With only one month before the winter parking ban sets in, Kingstonians alike are on the lookout to lock down available parking spots. With approximately 3,7000 parking spaces available downtown in conjunction with 1,400 street side metered parking spaces, it’s no wonder why our city with over 115,000 civilians are willing to pay big bucks to secure a space close to their workplace or home. However, with Kingston’s current focus on building a bike-friendly city, perhaps we can focus on this form of transportation which can essentially – and eventually – solve individual concerns of the winter parking matter in Kingston.

Is conforming Kingston into a more bike-friendly municipality the start to solving parking availability or is relying on cycling in the winter a safety hazard?

The City of Kingston, also named as one of the world’s Smart21 Intelligent Communities, recently announced the city will be putting initiatives in place in effort to strengthen Kingston’s ability to share the roads and initiate a more bike-friendly city. After accepting Bike Friendly Community Bronze recognition from the Share the Road Cycling Coalition in 2012, Kingston is striving to move up our Bronze status by implementing more bike-friendly developments.

Recent developments include sharrows introduced in 2011 and added June 2013 to the La Salle Causeway. The cycling symbols are intended to direct cyclists toward a safe line of travel and remind motorists to share the road. Infrastructure investments also include Share The Road warning signs to inform motorists to share the road with cyclists, and. bike racks to encourage biking and allow cyclists to park their bikes in Kingston.

It is safe to say these changes will benefit the cyclists in Kingston and will hopefully entice drivers to commute to work or school by bike. After all, two-wheelers aren’t exactly the majority of our commuters. Cycling will improve both our cities carbon footprint and eco-footprint, as well as enable individuals to become more physically active and aware of their surroundings. I mean – texting while biking will likely never be a problem.

However, it is worth investigating whether Canadian winter conditions may make it unrealistic – and essentially dangerous – to cycle among motorized vehicles this season despite beefing up bike-friendly infrastructure.

According to Statistics Canada, 65 cyclists died on Canadian Roads in 2007 – only 2.3 per cent of the total number of road deaths. That’s quite a low number. On average, 7500 cyclists are severely injured each year, with 1 out of 3 cyclist deaths occurring at night where this is artificial lighting. Winter nor precipitation was a variable in this study.

Transport Canada released a study illustrating cycling fatalities dramatically decreased annually over a 30-year study and interestingly, 90% of night-time fatalities were due to inadequate lighting. Again, precipitation was not a studied variable.

I have yet to find a study that correlates winter or snow as a variable that affects the statistics of injury or fatality. It can be argued that winter biking is just as safe as summer biking if the rider is taking the appropriate safety precautions and that the season doesn’t make it more or less safe, just perhaps more uncomfortable due to more layers of clothing. In reality, if the roads are icy, no vehicle – including a bicycle – will be in safe conditions.

With these statistics in mind, it’s very possible our cold Canadian winters may not affect cyclists if we have the proper infrastructure and safety measures in place, including winter maintenance of bike lanes and if possible, a lighting system that will make cyclists more visible at night and in turn, have more visibility themselves of the surroundings. Hopefully Kingston’s vocal approach to developing a more bike-friendly city will encourage the population to consider jump on a bike rather than turn on the ignition and in the foreseeable future, limit the need for winter parking disputes.

Thanks to Mikael Colville-Andersen for the photo associated with today’s post.

3 thoughts on “Peddling into a Smart City”