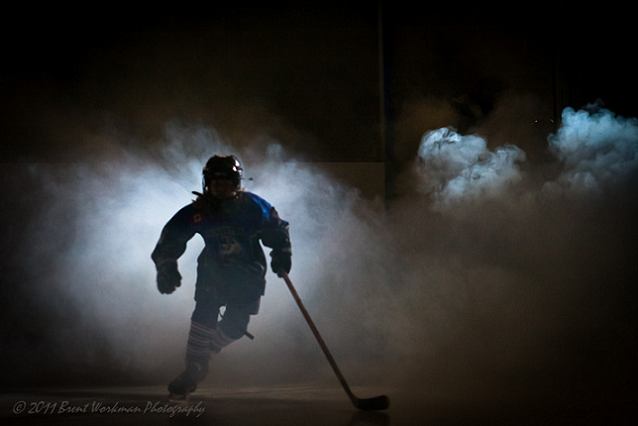 First things first, you’ll notice that today is Friday and yet today’s post is not entitled “Friday Foto”. We plan to continue featuring all of your fine photography but we thought we’d experiment and be a little more specific with our titles on Fridays.  Onward!

As I’m sure most of you know, Wolfe Island is very close to winning this year’s CBC Hockeyville competition.  In fact, they’re in the top ten and were part of a feature story this past Tuesday.  Hockeyville was created in 2006 with the intention of bringing communities together through their passion for Canada’s favourite past-time as well as promoting physical activity and good health through sport.  It also gives smaller communities the opportunity to see the NHL come to their hometown.  The winning community will receive $100 000 to upgrade their local arena, an NHL pre-season game and a visit by CBC’s Hockey Night in Canada. Four runner-up communities will receive $25,000 each for arena upgrades from and a community visit from CBC’s Hockey Night in Canada.

Wolfe Islanders have been working hard at showing off their love of the sport with the creation of original songs, dances, a parade, a chili competition, hockey tournaments of all sorts, displays in shop windows and great personal stories posted on the Hockeyville website.

Here is a excerpt written by musician Chris Brown:

My first image of indelible affection for Wolfe Island appeared in the form of the Zamboni being pulled by tractor when I arrived at the community centre. The ice was being groomed with exquisite care. As I laced up, a salt-and-pepper beard approached the bench and asked me what I thought of the nets….”Sewed ’em myself!” he said. “Awesome,” I replied, as the magic of the Island was starting to do its work on me.

This is an excerpt from a submission by Toni Vingar:

Wolfe Island has a great history of hockey and these people are proud of the game. One story I recall being told was when the Church Athletic League (CAL) – Wolfe Island won the title in the early 1960’s by beating out the city folk. When the story is told the smiles of the story tellers are ear to ear. Last year the annual Lake Ontario Water Keepers versus Wolfe Island hockey tournament in February was almost cancelled as it had rained and our rink was in no shape to play. The islanders weren’t about to cancel so the guys from Brophy’s Point found a back bay, set up the lights, the crowd gathered to see the tournament go on. This is true hockey spirit.

And one more from a child’s point of view, this was submitted by Hallie Hulton:

We have so much fun as a family playing hockey and skating around. My little brother Kale, is only 2 and he has his own pair of skates, but finds it hard to stand, but boy does he laugh at himself when he falls. When we are all so cold, we go into the house and my mommy makes us all hot-coco with marshmallows. I would love to be able to get up and drive down to our rink on Wolfe Island and watch my brother skate, and when he is all finished, I could lace-up and skate till dark. When I get up the next day, I would love to do it all over again!!!

This is only a small sample of what Wolfe Islanders have to say about their favourite sport.  There are 166 stories like these as well as videos and pictures from various events during and before the Hockeyville competition began.

Now all Wolfe Island needs is your support.  Currently they have an outdoor NHL sized rink but it needs a roof to keep the hockey playing going year-round.  Visit the CBC site and give them your support.  You have until Sunday night to get your votes in.  Vote now and vote often!  The winner will be announced on April 2nd during Hockey Night in Canada.  Go Wolfe Island, go!

Thanks to Brent Workman for today’s awesome shot.