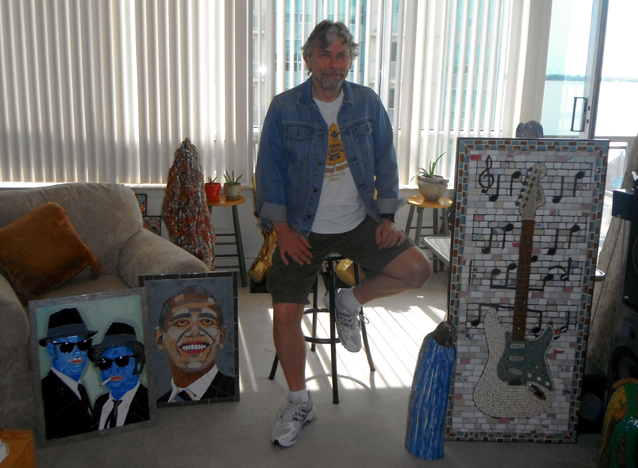 For Tony Cepukas, an up-and-coming sculptor and mosaic artist, breaking out on the Kingston art scene has a long time coming. With spot-on recreations of everything from Obama to the Blues Brothers, each expertly crafted with thousands of tile shards, Cepukas clearly has proven that he has artistic chops. In spite of his talent and passion Cepukas is still a newcomer. His first public show was just a few weeks ago at the Sydenham United Church, where he was able to show off more than twelve years’ worth of pieces that he’s created. “Well, now it’s the first one I’ve done,” he affably offers, modest above all.

Cepukas, recently retired from flight services with Nav Canada after thirty-two years on the job, perfectly embodies an interesting thought experiment. How do you kick start a livelihood after your livelihood, especially when the two are so vastly different? “”I was getting close to the end of my career, and basically I wanted to fill my time with something creative,” Cepukas explains. “I just wanted to do something original.” Certainly, his work fits that bill. One piece, for example, is a full-scale depiction of a Fender guitar with the music notes to “Purple Haze” as a backdrop. It represents over a hundred and twenty hours of labour. And it’s crafted out of several thousand tesserae varying between small and even smaller. It’s pure cool.

Kingston has always been good to its artists, with many galleries and exhibitions to suit any style or taste. But what about fledgling talent that’s looking to get started, show their stuff, and ultimately make some money? (“Because sometimes even starving artists like to eat dinner,” as Sasha Boczowski reminds us). “I met other people, they talked about other shows,” Cepukas says of his first exhibit experience. Of course, there’s also online. But Cepukas, whose home studio is filled with an enviable vinyl record collection and countless nods to the 70s, has so far steered clear of cyber-tech. “I gotta get a website,” he laughs. With any luck, it’ll be soon. This is work you have to see to believe.

How about you, Kingston?

Where do you like to discover or support local up-and-coming artists?