When we think about helping the environment, it often feels like an overwhelming task. Save the rainforests, adopt an animal through the World Wildlife Fund, save the oceans – does our little drop in the bucket actually help? I know it does, but it never feels like enough.

Did you know you can help out with local initiatives to preserve and maintain our native environment? The Kingston Frontenac Public Library (KFPL) wants us to learn about Trees in Kingston. Keeping our urban forest healthy goes a long way to keeping the city and its residents healthy, as well.

“Trees are vital part of the City’s urban and rural fabric. They provide shade in the summer, breaks from the cold winds of the winter, and can have a real impact towards addressing climate change. Trees also provide habitat for birds and help to beautify otherwise bleak areas of the City,” said Greg Newman, Manager of Policy Planning for the City of Kingston. Newman will be a speaker at Trees in Kingston.

I’ve been following some of the tree management the city has been doing with respect to the Emerald Ash Borer problem. It’s sad to see them take down mature trees, but looking forward, it is definitely what’s best for the environment.

From Marty Mayberry, Supervisor of Forestry for the City of Kingston:

“Since 2013, approximately 3,200 city owned Ash trees have been removed from the urban canopy due to the Emerald Ash Borer, an insect that has caused overwhelming devastation to the forest canopy within the Great Lakes Region since the insect first emerged in North America in 2002.

City of Kingston (CoK) has planted approximately 5,500 trees since 2013 to replace both removed Ash and other necessary hazard tree mitigation removals. In addition to these replacement trees, the CoK plants additional trees through parks development and Engineering projects, as well as through coordinated planting initiatives with the Cataraqui Regional Conservation Authority. All of these plantings contribute to the CoK council mandate presented in 2015 to double the tree canopy by 2025.

The City of Kingston Public Works department, which includes Forestry, has invested a great amount of time, money and resources into improving, maintaining and encouraging a species- and age-diverse Urban Forest. These efforts act as green infrastructure to manage storm water run-off, heat island effect, erosion, and air quality control. Along with these great benefits, trees also provide the city’s residents a sense of physical calmness, well-being and improved mental health.”

I didn’t know the tree at the front of my yard was maintained by the city.  When we had a stumpy sapling that wasn’t growing well I learned I could call the city and they would come out and assess it.  I did, they did, and they took it out – stump and all!  Later that year they came around and planted us a brand new tree, all at no charge!

Our new tree had a rough start. For the first few years it would lose all its leaves by the end of July – that didn’t seem healthy to me.  After a few years of this behavior I called the city and an arborist came out to take a look at it.  He told me it was healthy and had set leaves for the next season, but perhaps it was under-watered.  I didn’t realize it was our job, as homeowners, to give the new tree buckets of water to drink during the hot spells, but it worked. The tree is now holding its leaves much longer into the fall, and it looks happy and healthy.

If you are interested in learning more about tree management or have any tree related questions, the KFPL Live series is hosting Greg Newman and arborists from the City of Kingston for their monthly speaker series in February.

Trees in Kingston will be held twice during the month of February. Both talks will cover the same material.

Dates and times: Saturday, Feb 9 at 2pm at the Calvin Park branch, and Tuesday Feb 19 at 7pm in the Isabel Turner library. There is no admission fee, but it is suggested you reserve a seat at events.kfpl.ca (or by phone at 613-549-8888.)

Visit www.kfpl.ca for more information about this and other library programs. 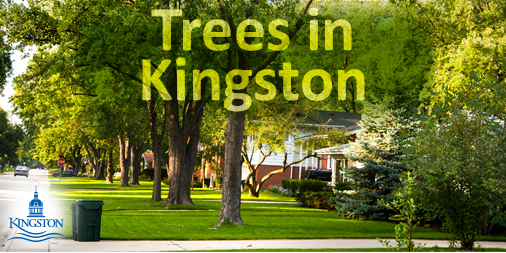 Jessica is a girl mom, music lover, avid reader and writes her own blog A Modern Mom’s Life. She is open to ideas and topics for future articles for Kingstonist. Email her at [email protected] and follow her on Facebook, Instagram and Twitter.