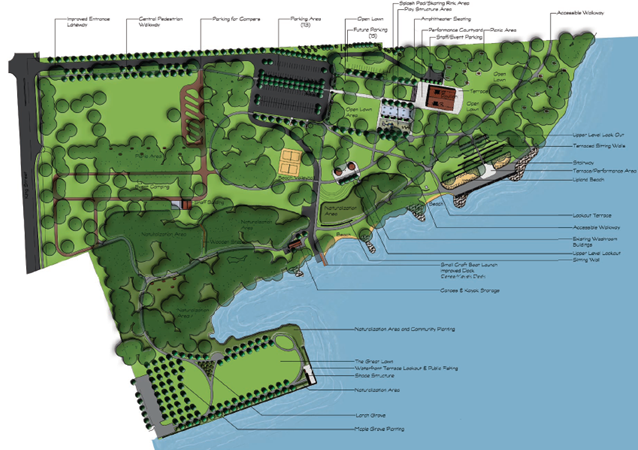 In June 2009, the City unveiled their concept design for the new look Lake Ontario Park. The initial, lofty plan incorporated elements such as a natural skating pond, bike, ski, canoe, and kayak rentals, and ample event space, which was supported by new amenities such as the naturalized amphitheatre.  The design received a lot of praise, while criticism was generated as a result of the absence of a dog park, and a city-run overnight camp ground.  Fast forward over a year later, and the City is unveiling their latest version of what Lake Ontario Park may resemble after renovations are completed in 2011.  While an off the leash area for Fido remains absent from the plan, overnight camping appears to be back on the table.  With all of the new additions in mind, this week’s poll question asks:

What is the most important element of the Lake Ontario Park plan?

Admittedly it’s been year’s since I visited Lake Ontario Park, as my adventures there ended the year they took the modest amusement park rides away.  It was no Coney Island, but it definitely had it’s nostalgic charms. Revitalizing Lake Ontario Park is definitely a good idea, as this prime piece of real estate can be transformed into a focal point for year round, outdoor activities in Kingston.  Having said that, while I’m not a dog owner, I feel for those who want a place to take their puppies and let them run around and socialize.  While an off the leash park scored very low in the initial community survey, the same thing goes for the inclusion of a public camp site.  Have Kingstonians honestly warmed up to the revenue and unique experience afforded by event-supported camping? Are there simply not enough dog lovers out there to make an off the leash park a priority?

What are your thoughts on the latest Lake Ontario Park public plan?  What features would draw you in to use the space? Please drop off your comments below.  Otherwise, if you’ve got a vested interest in the future of the park, please note that there is a a public meeting scheduled for this evening at 7 pm at the Portsmouth Olympic Harbour.