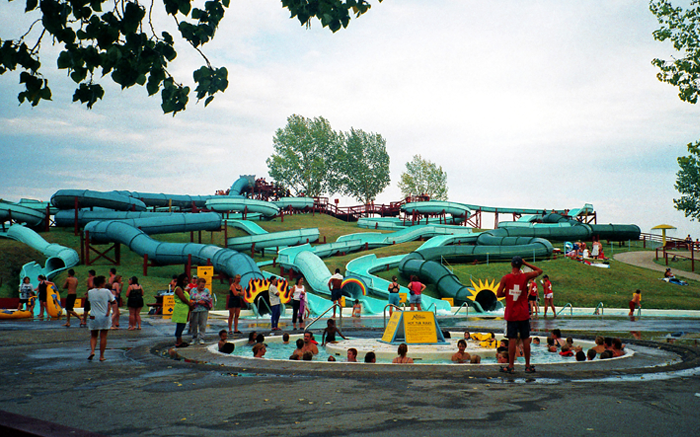 In late June, Mayor Mark Gerretsen teased his Facebook followers by posting a refreshing photo of whimsical waterslides on Facebook along with the question: “What do YOU think? Water park like this at Lake Ontario Park?!”. The post went on to attract over 250 comments for and against the idea, as well as upwards of 550 supportive likes. While remaining somewhat noncommittal on the issue, the Mayor proceeded to ask council whether or not they were in favour of investigating the establishment of a water park in the city.  Council was split on the matter, while the motion was defeated by a tie vote during their meeting earlier this week. Although many Kingstonians breathed a sign of relief, others were quick to chide Councillors who opposed the concept, going so far as to start a petition to bring the matter back before council. Since we may not have heard the last on this issue, let’s take some time to explore: what if the City of Kingston were to develop a water park at Lake Ontario Park?

Before we get into whether or not we need a municipally-backed or privately-owned water park, let’s first take stock of the aquatic facilities the City of Kingston already maintains and operates.  Artillery Park and the Scott Aqua Park are the city’s largest and most impressive facilities, both of which recently underwent multi-million dollar modernization and renovations.  The Scott Aqua Park deserves particular recognition as this outdoor facility boasts an unmissable waterslide and lazy river; common fixtures of most modern water parks.  On the other end of the spectrum, there are half a dozen brand new splash pads scattered throughout Kingston, one of which is located at Lake Ontario Park, and two aging wading pools at Victoria and McBurney Parks respectively.  Given the wide array of options, I think it’s safe to say that taxpayers fund and have access to a decent number of free, reasonably priced and accessible aquatic facilities.

Private and institutional pools can be found at Queen’s University, CFB Kingston and the YMCA, and just outside of Kingston there’s also the W.J. Henderson pool in Amherstview.  A few of those facilities even have waterslides.  Of course, local area hotels, including The Ambassador and Courtyard Marriott also have waterslides, and over a dozen others offer some sort of modest indoor or outdoor pool facility for guests.  Some of these hotels even let folks who aren’t guests use their respective facilities for a nominal daily fee.  For instance, you can make use of The Ambassador’s pool and waterslide for $5, and kids under a certain height swim for free so long as they are accompanied by a paying adult.  In spite of the number of privately owned and operated pools, technically none of these facilities pass as full-fledged water parks.  Then again, none of them were built with that goal in mind.

Kingstonians in search of water parks with multiple slides, wave pools, lazy rivers and so on, must therefore venture outside of the city.  There are at least 6 water parks within a 3 hour drive, which is a reasonable distance for a family looking to do a day-trip during the Summer.  These options include: Roaring Rivers Water Park (Cobden), Calypso (Limoges), Cedar Park Resort (Bowmanville), Splash Island at Toronto Zoo (Toronto), Splash Works at Canada’s Wonderland (Vaughn), and Wild Water Kingdom (West Brampton).  These parks are definitely pricier than your average pool with a slide, and when you add in the cost of gas, food and so on, it can be hard to stay within your budget.  Nevertheless, if you’re looking for a real soaking, thrills and nostalgic water park memories, these spots are all fitting destinations.  But back to the matter at hand, none of these attractions are in Kingston.

If Lake Ontario Park was eyed as a possible location for a water park in Kingston, we would have to work around the multi-million dollar upgrades LOP received in 2013, which include a splash pad, waterfront trails, enhanced waterfront access, playground, beach volleyball court and more.  Keep in mind that these elements were selected after extensive public consultation, which did not support amenities such as an outdoor staking rink, public camp ground, or dog park.  Given the fact that these features were passed up, I doubt there would have been much of an appetite for pouring millions more into Lake Ontario Park to accommodate a water park, let alone a pool with a slide.  The cost of a water park at LOP wouldn’t stop with construction, as taxpayers could be partially on hook for maintaining and operating such a facility.  Furthermore, as we saw when the Scott Aqua Park opened, the price of admission was higher than many had hoped for, which put season passes and regular usage out of reach for many families.  Although land is ample at Lake Ontario Park and you could make an argument for the economic spin-off and jobs, lessons learned from facilities such as the Belle Park Fairways and K-Rock Centre underscore the likelihood that a city-owned or subsidized water park would cost more than what’s it worth to Kingstonians.

Considering the aquatic options available in and out of the city, we aren’t hurting due to the lack of a water park in Kingston.  Accordingly, I tend to side with the naysayers on this issue, in that our tax dollars would be better spend on road repairs than building something we could realistically only use 4 months out of the year.  However, if Kingstonians feel strongly enough about the idea, perhaps some private developer will swoop in and make it happen… just not at Lake Ontario Park.  Do you think there should be a water park in Kingston?  If so, who should fund and operate it?

Credit to Robert Linsdell for the photo of Winnipeg’s privately owned and operated Fun Mountain Waterpark.

7 thoughts on “What if Kingston…”