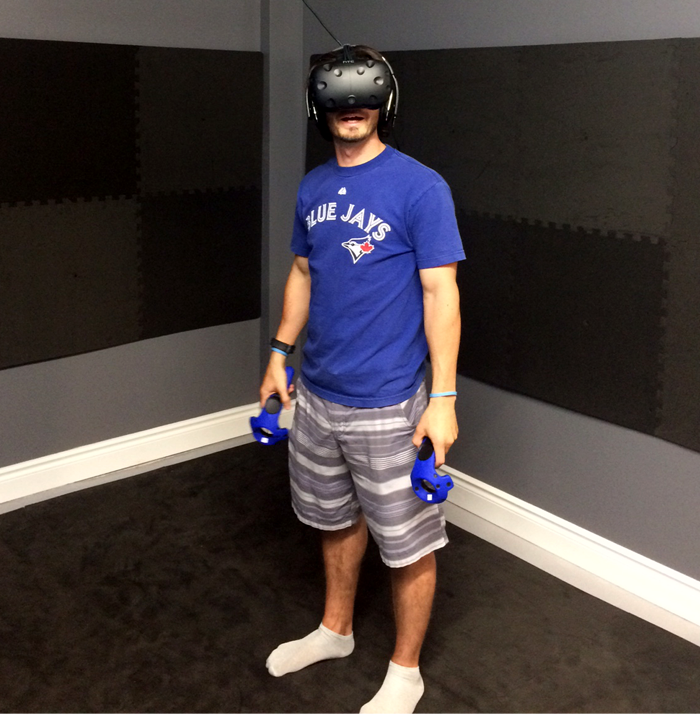 I have always loved video games. From Dig Dug on the Atari to Super Mario Bros. on Nintendo and Goldeneye on the Nintendo 64, it doesn’t matter which decade, I play them. Gaming has evolved to the point that players are no longer watching their avatar on a screen, they are entering the game through virtual reality.

Virtual Reality gaming is still in its infancy, but Kingston residents can check out the wonder of the virtual world by visiting The VR Hut at 331 King Street East, Suite 201, across the road from Springer Market Square.

My first experience with this brand-new business to our city was by chance, when a scuba diving day trip was cancelled. We had lunch at the Red House and wanted something exciting to do in the afternoon. The VR Hut had just opened the week before, so we tried our luck. When I first walked in, I was a little surprised by how bare the place was. I learned quickly that it didn’t matter what was on the walls, all that mattered was what was in the individual bays sectioned off in the suite.

In the center of the pods was an HTC VR headset suspended from the ceiling just waiting to be worn. My friend Colin and I didn’t need to wait long, we signed a few forms, created an account and soon the world was blacked out to me, as I waited for the game to load. I felt silly just standing in the middle of my specialized room in the darkness waiting for my video game to begin. I was oblivious to anything happening in the suite, but then the game loaded up. Have you ever seen characters being transported in Star Trek? One minute they are on a ship, and then suddenly they are standing on the surface of a distant planet. That’s what it felt like when the game loaded for my first session at The VR Hut.

When you place the VR headset on, it’s easy to forget about where you are and be distracted by the game you are playing. As a pop culture geek, I loved exploring my space in this ‘world’ and being reminded about safety via an appearing blue grid. That was to caution me about my proximity to the wall. For a moment, I thought I was in Tron.

Colin and I tried out a thirty-minute session, which involved us defending a castle with bows and arrows, and then battling zombies in a game called Arizona Sunshine. This was the best choice ever. We walked across bridges, over hilltops, and through small towns trying to find our way to safety from the zombies. Finally, we died trying to enter a mine, and our session expired. I knew I would come back.

As an end of summer treat, I talked a colleague of mine into spending an hour in The VR Hut. Andrew was sold once I said the word zombie. Similar to my first visit, we met friendly employees who welcomed us, and got us into the bays as fast as possible. Andrew and I would relay information through our headsets, separated by walls but side by side in the virtual world of Arizona Sunshine.

Unlike my first visit, we opted for the hour-long session which was only $45. It was the best money I ever spent. I didn’t think I would get such a workout playing video games, but as much as I knew the character I played that walked through Arizona was virtual, I felt every muscle in my body tense with every turn in the game.

If you are looking for a new form of entertainment check out The VR Hut. Not only is the staff friendly, the prices are affordable, and it’s a one of a kind entertainment experience in downtown Kingston.

5 Things to Know Before You Go