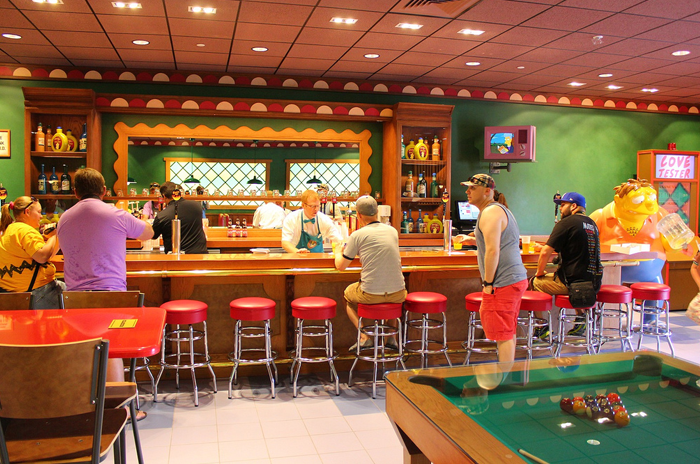 Kingston is often recognized for punching well above its weight in the foodservice industry. We quite possibly have more options for dining out per capita than any other city in the province.  Moreover, the city boasts a cornucopia of farm-to-table establishments, a growing fleet of gourmet food trucks, and we are frequently targeted as a test market by franchised and fast food restaurants. In spite of the overall health and vibrancy of the local food scene, one category we’re truly lagging behind in is that of the gimmicky themed establishment.

One of the initial pioneers in this specialty segment is that place in Boston, where everybody knows your name. Those who have stepped foot inside the real-life Cheers know that it looks nothing like the on screen version depicted in the classic 80s sitcom. Nevertheless, fans continue to flock there just to sit in Norm’s chair, catch a glimpse of Sam and Diane as well as buy cheesy, overpriced memorabilia.  Our neighbours in Toronto have a few  tv- and film-themed establishments, including a Harry Potter-inspired bar dubbed The Lockhart, a Friend-ly Central Perk pop-up opening this June and a Seinfeld spin-off Monk’s Diner coming in July. A bit further afield you’ll find Breaking Bad baristas at Walter’s Coffee Roastery in Istanbul, Middle Earth’s Hobbit Pub plunked down in Southampton, and the Wes Anderson-designed/Grand Budapest Hotel-themed Bar Luce in Milan. With dreams of immersing yourself in these fictional realities and more, this week’s poll asks:

Does Kingston need a tv- or film-themed restaurant, bar or cafe?

Admittedly, one could easily argue that Kingston already has enough kitschy themed eateries.  From Montana’s outback saloon to East Side Mario’s big apple explosion and Diane’s charming take on the Cape, the cheese factor is not entirely lacking in this city. However, none of these places are truly derived from popular film, television or literature.  While their decor may support the overall theme and provide a mild sense of escape, they a far from immersive experiences that have the power to surpass our wildest dreams.  Save for Diane’s, these chains are otherwise commonplace, rather than being a truly unique draw that inherently attracts loyal fans from around the world.

What sort of tv- or film-themed restaurant, bar or cafe do you think would be a good fit for Kingston?  More importantly, how long do you think Kingstonians will have to wait until we can set foot inside our very own Central Perk, Moe’s Tavern or Three Broomsticks?