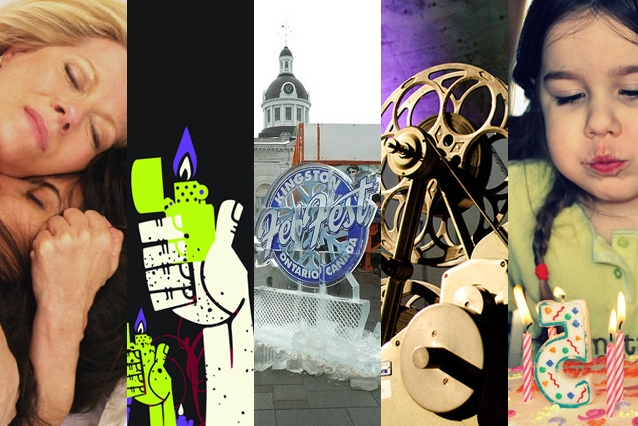 If you’re reading this, it means that you survived the worst of what 2012 could muster: snowmaggedon, the NHL lockout, Gangnam style, the fiscal cliff, teachers’ job action,  and the list goes on. Love it or leave it, 2012 is now a part of the history books, and it’s high time we start looking forward to the events that will coax us out of our cozy hibernation over the next few months. So, grab your skates, turn off your cell phones before the coming attractions begin, and shuffle from one exhibit to the next via our top five things to see and do, winter 2013 edition. Fair warning, this year’s list looks rather similar to last year’s, which is a testament to the strength of Kingston’s signature winter events.

14th Annual ReelOut Queer Film and Video Festival, 31 January to 10 February 2013: lovers of independent film and video rejoice! Reelout14 continues the tradition of honouring the work of those who have championed queer film and video by showcasing the best and brightest queer cinematic offerings from around the world. With over 80 short and full length films as well as amazingly fun festival parties to attend, ReelOut offers something for everyone!

ArtIgnite!, 25 January to 10 February 2013: “a marathon of arts events in Kingston” featuring more than 40 dance, music, theatre, visual art, film and craft events and dozens with free admission. ArtIgnite is a collaboration between Queen’s University, the City of Kingston, Downtown Kingston, and many Kingston arts groups and artists. Since the event’s inception two years ago, ArtIgnite has brought students and the Kingston community together through artistic collaboration and creative expression, showcasing local talent and celebrating diversity of art form, audience and artists.

FebFest, 31 January to 3 February 2013: voted by our readers as the most anticipated event of Winter 2013. This year’s developing schedule of events includes all our favourites such as free skating on the rink at Market Square, the Limestone Classic Hockey series, snow sculptures, massive snow maze, Beaver Tails and of course, appearances by NHL alumni. FebFest is the real deal, and it’s one of the only reasons we pull ourselves away from our cozy flannel fortresses during the cold winter months.

Kingston Canadian Film Festival, 28 February to 3 March 2013: from DIY comedy to Academy Award-winning drama and workshops for aspiring film makers, KCFF is the largest stand-alone showcase of feature films from across Canada. I’m eager to get my hands on the program for this year’s festival, so that I can plan which films I’ll be screening alongside fellow, local film buffs. Whether you plan on screening Oscar and Genie hopefuls, or rub elbows with the producers, directors and stars of the Canadian film industry, KCFF will not disappoint.

Kingstonist’s 5th Birthday, 2 March 2013: five years ago, Danielle and I launched Kingstonist with the goal to develop a community-based publication with a distinct focus on arts, the environment and stories that really matter to the Limestone City. We’ve had a tremendous amount of help along the way and could not have reached this amazing milestone without the tireless efforts of our talented writers, as well as the challenging dialogue furthered by our thoughtful readers.  I’ll remain tight lipped about what we have in store to commemorate our fifth year, but suffice to say there are many exciting changes on the horizon.

Credit for the photos attached to this post go to: ReelOut, ArtIgnite, Kingstonist’s Flickr, marcuslyra and jinjur71. Of course there are numerous other events taking place this Winter. What are your top five things to see and do?