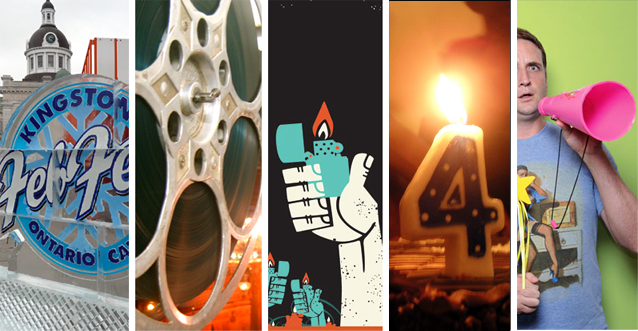 Winter is here, well sort of.  At a risk of jinxing us all to consecutive bouts of snowmageddon, there really is no reason for us to be curled up in front of the fire and ignoring all the great seasonal events over the coming months.  Here’s our five most anticipated events this coming quarter!

13th Annual ReelOut Queer Film and Video Festival, 26 January to 5 February 2012: lovers of independent film and video rejoice! Reelout13 continues the tradition of honouring the work of those who have championed queer film and video by showcasing the best and brightest queer cinematic offerings from around the world.  With over 80 short and full length films as well as amazingly fun festival parties to attend, ReelOut offers something for everyone!

ArtIgnite!, 27 January to 12 February 2012: “a marathon of arts events in Kingston” featuring more than 40 dance, music, theatre, visual art, film and craft events and dozens with free admission.  ArtIgnite is a collaboration between Queen’s University, the City of Kingston, Downtown Kingston, and many Kingston arts groups and artists.  Since the event’s inception two years ago, ArtIgnite has brought students and the Kingston community together through artistic collaboration and creative expression, showcasing local talent and celebrating diversity of art form, audience and artists.

FebFest, 2 to 5 February 2012: when you consider the popularity of this massive winter festival, it’s no surprise that FebFest is turning 8 this year.  This year’s developing schedule of events includes all our favourites such as free skating on the rink at Market Square, the Limestone Classic Hockey series, snow sculptures, massive snow maze, Beaver Tails and of course, appearances by NHL alumni.  FebFest is the real deal, and it’s one of the only reasons we pull ourselves away from our cozy fireplaces during the cold winter months.

Kingston Canadian Film Festival, 1 to 4 March 2012: From DIY comedy to Academy Award-winning drama and workshops for aspiring film makers, KCFF is the largest stand-alone showcase of feature films from across Canada. I’m eager to get my hands on the program for this year’s festival, so that I can plan which films I’ll be screening alongside fellow, local film buffs. Whether you plan on screening Oscar and Genie hopefuls, or rub elbows with the producers, directors and stars of the Canadian film industry, KCFF will not disappoint.

Kingstonist’s 4th Birthday, 2 March 2012: yet again, it’s hard to believe that Kingstonist will soon be celebrating our fourth birthday. The team has been working hard over the holidays to put a giant exclamation mark on another great year for our ever-growing site. Stay tuned for more details on new features, new contributors and other secret stuff I dare not mention for fear ruining everything we’ve got in store. Bottom line, you’d better join us to blow out the candles.