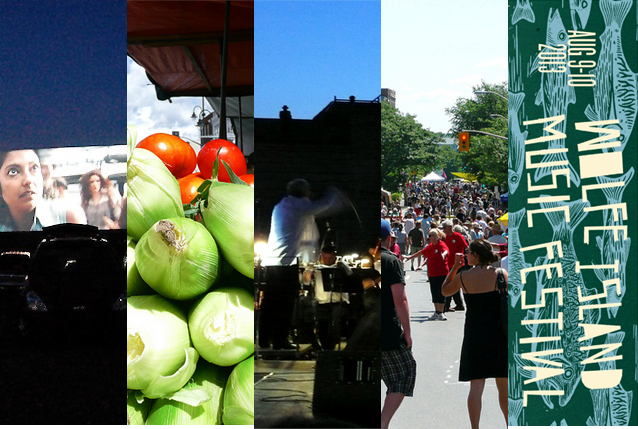 In the wake of the last day of school, the end of highschool exams and Canada Day festivities, few would argue that Summer has yet to arrive. The smell of campfires, the booming sound of fireworks and the welcome relief of a mid-day sun shower forge unbreakable memories that help keep us cozy during those blizzard-filled months. Summer also brings with it a new crop of impressive events on our community calendar. Of course, selecting which events to feature in our seasonal top 5 is almost as difficult as choosing which ones to attend. Challenging as it may be, we’ve once again handpicked the most accessible, affordable and anticipated events from this coming quarter. Enjoy!

Kingston Family Fun World Drive-In, now through mid-September: with less than 50 drive-ins remaining across Canada, these longstanding landmarks of summer are quickly becoming endangered species.  Our three screen drive-in is no exception, as their future hinges on the outcome of the “go digital or go dark” campaign.  Will this be the last summer for drive-in movies in Kingston?  A favourite pick for this Kingstonian, the screens at Kingston Family Fun World offer nightly double and triple features, the newest Hollywood blockbusters at a fraction of the cost of corporately-owned cinemas.

Kingston by Fork, now through end of August: eat your heart out as you explore Kingston’s culinary landscape with two distinct tours, Homegrown Eats (Thursdays and Saturdays at 12pm) and an Edible Escapade (Wednesdays and Fridays at 1:30pm).  With each tour you’ll hop from one locally owned hangout to the next, and explore the vibrant local food community, from producer to consumer.  Highlighting casual, gourmet and local flavors, this homegrown foodie tour, now in its third year, is the perfect way to nibble around some of the best of downtown Kingston’s restaurant scene.

75 years of Modern Music, 2 August 2013: catch the refreshing breeze off of the lake and enjoy the enduring atmosphere of Kingston’s two century old Fort, as you celebrate 75 years of modern music with the Kingston Symphony.  This outdoor concert features a truly eclectic program that’s sure to please both regular and reluctant symphony goers.  Six superb Canadian voices including Patricia O Callaghan, Jon Harvey, Christopher Dallo, Derrick Ballard, Emily Fennell and Jay ”Smitty” Smith take the stage with the orchestra to perform works by the likes of Led Zepplin and Simon and Garfunkel.

Princess Street Promenade, 3 August 2013: for the second consecutive year, our readers have crowned the Princess Street Promenade as the most anticipated event of the Summer. Now in its forth year, this massive street festival spans Ontario to Division along Princess Street, offering free and affordable treats from local merchants and restauranteurs. From climbing walls to BBQ cookouts, dodge ball to dance demonstrations, live music and more, this is truly a pedestrian paradise. In addition to all of the action on the street, all businesses remain open for those who are interested in shopping the day away.

Wolfe Island Music Festival, 9 to 10 August 2013: this annual two-day indie music festival has it all: scenic ferry rides, camping, small intimate shows on Friday night, as well as the traditional main stage all day on Saturday. With a Canadian line-up that boasts the likes of Joel Plaskett Emergency, Born Ruffians, Buck 65, Two Hours Traffic and many more, WIMF 2013 is poised to be a crown jewel of this summer’s best things to see and do.  Carefully curated by one of the city’s most celebrated promoters, Virginia Clark, WIMF offers the perfect musical getaway on the island that’s right on our doorstep.