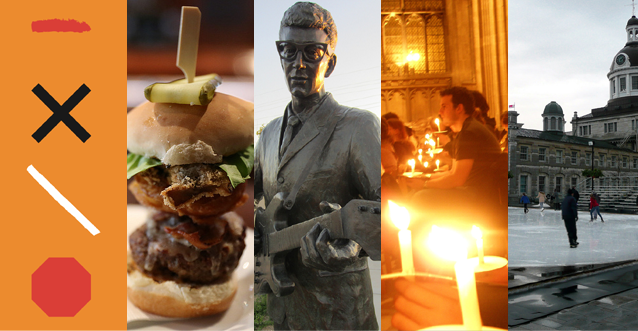 We’re now into the second week of Fall and have already witnessed a handful of significant seasonal events come and go.  Hard to miss extravaganzas such as Writersfest, Run or Dye, Chili Fest and one half of the reinstated Queen’s Homecoming are now part of the history books, but that doesn’t mean the months ahead are devoid of fun, excitement and things to look forward to.  Beyond the colourful transformation of the local landscape and bountiful harvest, there’s seemingly more going on in Kingston this Fall than what we’ve seen in recent autumn’s past.  Old favourites including getting lost in the corn maze, trips to Fort Fright and the County’s burgeoning vineyards, Zombie Walks and OHL hockey are all ripe for recommending.  Lest we forget Remembrance Day, Veteran’s Week, and an upcoming visit to the Canadian Forces School of Communications and Electronics by Princess Anne.  Of course, Halloween, the Santa Claus Parade, and my birthday all have to factor into our respective social calendars.  Pairing down the list is painful, but yet again we’ve managed to curate a list of our most favourite, most anticipated things to see and do around Kingston this Fall!

Tone Deaf 12, 17 to 20 October 2013: Kingston’s annual festival of adventurous and experimental sound performance is a four-day affair that boasts a tremendous roster including Jesse Zubot, Le Révélateur, Loscil, Matt Rogalsky and many, many more.  Entering its twelfth year, the festival serves as a vital outlet and destination for a wide range  or musical tastes and practices.   This year, each evening of Tone Deaf is thematically focused, with curious titles spanning the gamut of ambient occlusion, nanook of the north, concerted action and organic synthesis.  Tone Deaf 12 is not to be missed.

Haunted Dishcrawl, 23 October 2013: Dishcrawls are a relatively new phenomenon in the Limestone City, although they’re success and popularity in larger, neighbouring cities is no secret.  For a mere $60, the Haunted Dishcrawl provides brave diners with a chance to eat their way through unique menu offerings at four specially selected, local restaurants.  The haunted culinary adventure is designed to help Kingstonians re-imagining the way we think about food, drink, and the community.  Whether you to choose to attend solo or with friends, we’re sure you’ll meet some fantastic people and experience new tastes like never before.

BUDDY – The BUDDY HOLLY Story, 7 to 16 November 2013: when the first Canadian Idol, Ryan Malcolm, was cast as Buddy Holly in the 2010 Kinsmen production of The Buddy Holly Story, I honestly wasn’t sure what to expect.  Tickets were scooped up instantly and the show went on to receive rave reviews from critics and theatre goers alike.  The show was so popular that the Kinsmen are betting that lightning will strike twice with 10 shows this November that are sure to sell out quickly.  With Malcolm reprising the role of Buddy, tickets to this rocking musical make a great early Christmas present.

Candlelight Christmas, 17 and 18 December 2013: speaking of Christmas presents, here’s one of my favourites in terms of giving and receiving.  If you’re anything like me, you probably put off thinking about and engaging in any Christmas related activities until the last possible moment.  Year after year, the Kingston Symphony’s Candlelight Christmas at St. George’s Cathedral has provided the perfect atmosphere to get me feeling all holly and jolly.  With only two performances scheduled, these popular concerts are easy to recommended as a must-attend.  Offering general seating, it’s highly advisable to get there early and secure a perfect seat.

Skating on a City Rink, as soon as it gets cold: when the last bag of Halloween candy has been emptied, the final leaf has fallen to the ground, and we’ve submitted to the undeniable probability of cold, frigid months ahead, rinks will begin to pop up all over the City.  Skating on outdoor rinks is the quintessential Canadian pastime in the Winter, and Kingston does it with style.  With 17 rinks to choose from, there’s no shortage of venues for shinny, a leisurely skate and well-deserved, post-game hot chocolate.