The day before this top ranking post was published, I was racking my brain to come up with a great, arts-centric poll.  I settled on proposing an all-night arts spectacle after reading numerous reviews from Torontonians who had attended Nuit Blanche that very same weekend. I had no idea the post would go on to attract a record number visitors, and poll respondents.  While it remains to be seen if Kingston could pull such an event off, clearly a majority of our readers would get behind it. 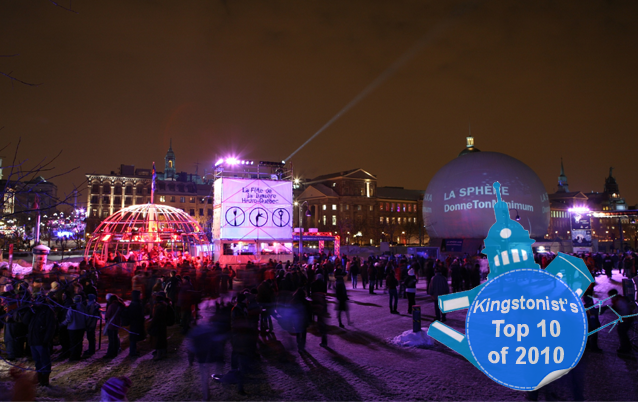 This past weekend, Toronto played host to Nuit Blanche, an all-night contemporary arts festival that is hosted at a variety of untraditional venues across the city. The origins of Nuit Blanche are heavily disputed as cities such as Paris, Berlin and St. Petersberg lay claim to founding the event. Nowadays, over 120 cities, including Toronto and Montréal, host their very own Nuit Blanche style of event where artists take over the city, using everything as a canvass. Unsuspecting audiences are treated to oversized installations ranging from 1,500 foot-long human sculptures snaking through the streets, to interactive light shows staged from highrises, and even impromtu snowball fights with strangers. The question is, would Nuit Blanche work in the Limestone City?

Regular and one time only events such as Art After Dark, The Happiness Project, Mouthy and the Multicultural Arts Festival are proof that Kingston has both the talent and audience to receive a production that resembles Nuit Blanche. Throughout last weekend’s event in Toronto, I was amazed by the number of folks on Twitter and Facebook who were thoroughly enjoying and connecting with their local arts scene. I was also surprised to learn that some of my friends, those who don’t regularly frequent arts and culture events, were out in full force to take in the all-night art shindig. While the spectacle of Nuit Blanche is a sight to behold, the idea that it can attract a new, untraditional crowd is equally as impressive.

So what are your thoughts on a Nuit Blanche in Kingston? Should we start small and see what kind of support the event gets, or jump in with both feet and let artists take over the city for an evening? Would you attend or get involved? Special thanks to Meantux for today’s accompanying photo of Nuit Blanche dans le Vieux Montréal.
Share
Tweet
0 Shares