After watching the Kingston Pride parade pass me by on a downtown street corner, I found Tyffanie’s photos and account of the week-long festivities extra special. The pictures from the parade provide a unique perspective, that were enjoyed by a lot of people. While the post itself didn’t generate a lot of discussion, incoming traffic via Email was tremendous for over a month, well after Kingston Pride had wrapped up for another year. 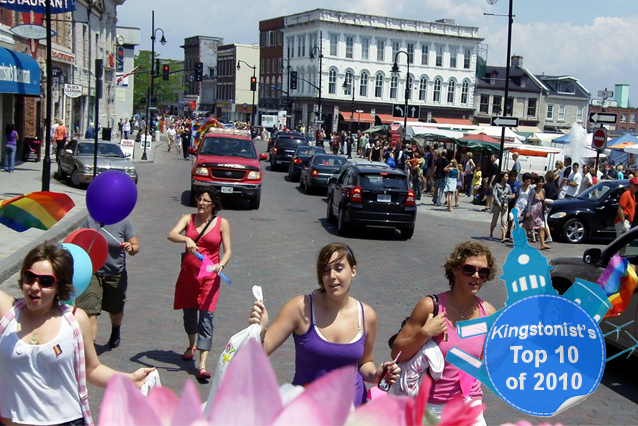 Am I ever burnt! It’s always the patch of skin you least suspect or forget to cover up with some SPF 3000. But a little bit of skin pain pales in comparison to the joy and fun had by over 300 people this past Saturday, June 5th. The skies cleared on Saturday just in time for the Kingston Pride Parade.

In attendance, there were over 300 people and spectators with a large populous of youth. Right behind my float/Porsche was FUSE: A drop-in for LGBTTIQ youth under the age of 19 and they were strutting their pride. It was so much fun to have them nearby throughout the parade. They had no hesitation and had smiles all around.

Queer youth is something of a hot topic these days. Many are coming to terms with their sexuality and gender identities at an earlier age. This can cause some concern for parents, teachers, and lawmakers. However, it feels like the youth are taking the lead and starting their own initiatives to address these concerns. In addition to FUSE, there were several Gay-Straight Alliance groups from local high schools (or GSA for short). GSA groups have goals to help make their own schools more safe and welcoming to LGBT students. GSA’s are also helping to create the leaders and activists of tomorrow. Whenever I speak with a member of a GSA, I’m always fascinated by this young person’s strength and determination.

Later that evening, I had the pleasure to Storm the Fort. As a climax to the day, Kingston Pride 2010 and ReelOut Queer Film + Video Festival organized a BBQ, film screening, and dance at Fort Henry. The film called Beyond Gay: The Politics of Pride was projected onto the walls of Fort Henry. The symbolism wasn’t lost of me. Here we were, a small yet strong and proud group, leaving our impression on the walls of Fort Henry, one of the greatest symbols of Kingston and Canada.

The topic of the film Beyond Gay was very powerful. A group of LGBT people and friends were standing in a strong walled fortress with history around every corner and on the screen were individuals around the world faced with the chance that they could be beaten, raped, or killed just because they are LGBT. In Kingston, I can be on a float or a Porsche and have no fears of being stoned or shot. It really reminds me how far LGBT people have come and how much further we must go. We need to help bring safety, respect, and dignity to our youth, the world, and ourselves. There is still much to do.

That being said, we should still celebrate what we have achieved. Kingston Pride 2010 has a few more activities going on this month in case you missed out on the parade. Come out, come out wherever you are and let’s have some fun and celebrate what has been achieved, as well as what we will achieve in the future. Happy Pride!