Without question, one of my favourite and most informative outings from last year was to Joe’s Musical Instrument Lending Library. Danielle did a fantastic job outlining the history of Joe’s M.I.L.L., and since then we’ve continued to help spread the good word.  Similar to our other best of post from 2010 concerning KFPL, Joe’s M.I.L.L. is another fantastic community resource that you need to be aware of and use more often. 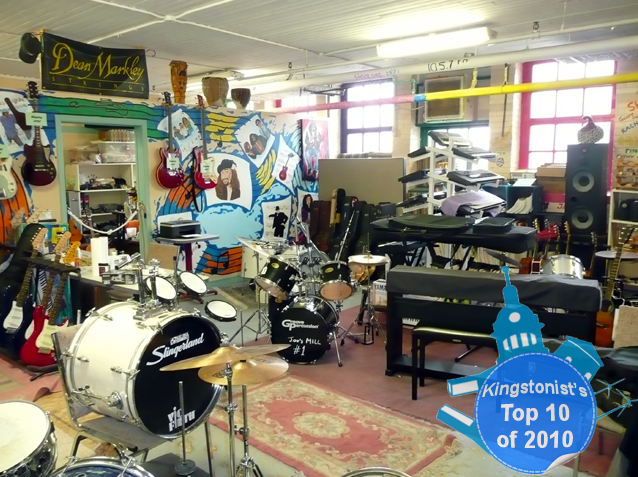 I thought I’d be entering a small office in the basement of the Robert Meek Community Centre at 559 Bagot St. but boy, was I wrong. I rang the bell to enter and was directed to a large classroom filled to the brim with shiny instruments just waiting to be played. It was overwhelming. There were dozens of guitars, both acoustic and electric, I saw banjos and basses, violins, keyboards and of course, mandolins. The walls are painted beautifully with murals of the late Joe Chithalen, to whom the library is dedicated.

Joe Chithalen was a well-known bass player in the Kingston music scene in the 1990s. Most notably, he played with Weeping Tile and The Mahones. On May 1st, 1999, while on tour in Amsterdam with The Mahones, Joe passed away after accidentally ingesting peanuts. His music and personality touched many people in Kingston and all over Canada. Sarah Harmer, formerly of Weeping Tile, wrote “You Were Here”, the title track of her solo debut album, in memory of Joe.

Shortly after his death, a close friend, Wally High, along with many other friends and family members, founded Joe’s M.I.L.L. Wally High was a Kingstonian, born and raised, and had a great following in Kingston and all over North America as a musician, artist, actor and entrepreneur among many other talents. Along with family and friends, he used his connections and entrepreneurial skills to get the library up and running. In January of 2008 Wally passed away after a bout with cancer but his memory, along with Joe’s, still lives on.

The library is exactly what it sounds like. You go in, you pick your instrument and you get to take it home with you for one month – totally free! When I went to get the mandolin I was asked for ID and I did have to pose for a quick photo for their records – this is just to make it easier for me to borrow again. I was given a beautiful, well-maintained mandolin and was even offered patch chords and an amp if I thought I might be plugging it in. Many people borrow these instruments not only to try something new without the expense, but also for live performances or recordings. Lots of students come in to borrow for a school concert or just to try out an instrument before committing to an expensive purchase.

The instruments are donated to the library by various generous folks around town, from those who are simply upgrading their own instrument to those who have had that old violin of grandpa’s in the closet for years (an aside: if you have an instrument around that isn’t being played, this is a great option. Instruments are meant to be played and actually lose their quality if they sit for too long, so get them out of the closet!)

As a musician who likes to try new things, this is an ideal place for me to do so without breaking the bank and it’s also a great option for parents who can’t justify going out to buy a new instrument when their child is just starting out. As a violin teacher, I am a big supporter of the M.I.L.L. and I have sent numerous students there to get a fiddle before they commit to buying one.

The M.I.L.L. is greatly supported by local musicians and many fundraisers have come to be in honour of the library. You may be familiar with The Joe Show, Homegrown Live, The Midnight Magic Rodeo Show and the recently released Tracks of Kingston CD. This is a wonderful project that has helped keep the music alive in a time where it is being taken away from our schools. It’s also a great way to see our old, loved instruments breathe new life. Head on down to the library, take a look around (or check out our latest Flickr set), talk to the dedicated volunteers who make it all happen and maybe find yourself a nice instrument to try out. Donations of both instruments and money are needed and appreciated.

As well, be sure to come out to The Midnight Magic Rodeo Show this Saturday at 6:30pm at The Wellington Street Theatre. In addition, please note that May 15th will be the second annual Homegrown Live where you can show your support and enjoy over 50 Kingston bands in over a dozen locations all over town.